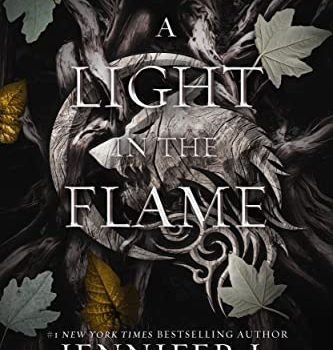 Armentrout, Jennifer L.: A Light in the Flame

Fantasy romance novel, second in the Flesh and Fire series. The only person who can save Sera now is the one she’s spent her life planning to kill.

Young-adult campy horror novel about Dane, a teen witch who returns home to solve the mysterious death of his cousin with the help of a coven of mean girls trying to give him a makeover.

Czerneda, Julie E.: To Each this World

SF novel. A trio of humans work with mysterious alien allies to reconnect with long lost colony ships full of sleepers, on their way to settle distant worlds that are no longer safe.

Harris, Charlaine: The Serpent in Heaven

Alternate-history fantasy novel, the fourth book in a series featuring gunslinger Gunnie Rose, but this time focusing on Lizbeth’s half-sister Felicia, at the Grigori school in San Diego when she is attacked and secrets of her past are revealed.

SF novel, second in the Children of the Consortium series. When rogue drones threaten citizens and the ship’s crew falls ill, the Recorder answers their call for help, once again drawing scrutiny from the Consortium.

Fantasy novel, third in the Goblets Immortal series. Meraude builds an army to exert control, but Aidan has turned against her.

Young-adult fantasy time-loop novel. A teen has to relive a horrible Valentine’s Day over and over again.

Fantasy novella. A clerical student in debt to a gangster is ordered to deliver the angel his grandfather reputedly kidnapped, or lose body parts.

“As funny as they may be, Parker’s stories are never without a genuinely dark edge, and the violence and brutality of Pulling the Wings Off Angels is evident from its opening paragraph – or for that matter, from the title itself, which turns out to be pretty literal.”
— Gary K. Wolfe, Locus, November 2022

Historical mystery novel with fantasy elements, based on the true story of the 1905 proposed Native American state of Sequoyah in the area that became eastern Oklahoma.

Rowland, Diana: Rise of the Demon

Fantasy novel, seventh and final in the overall Mistborn series, fourth in the Wax and Wayne sub-series.

“It’s got virtual reality; it’s got robots; it’s got dragons; it’s got shapeshifters; it’s got time travelers. My goodness, it’s also got lizard people. It’s got climate change. It’s got cool visions of technology as well as critiques of capitalism. It appraises race and racism, gender and queerness, and religion too. It challenges its audience through stories of rituals, initiations, and spiritual beliefs. It’s got star gazing, hover buses, underwater adventures, hauntings, love affairs, magic and science in equal measure. By golly, it even has a story featuring a spaceship named Biscuit.”

Tolkien, J.R.R.: The Fall of Númenor and Other Tales from the Second Age of Middle-earth

Collection of Tolkien’s writings on the Second Age of Middle-earth, in one volume for the first time, with new Illustrations by Alan Lee. Edited by Brian Sibley.

Post-apocalyptic SF novel of a changed America recovering from environmental collapse, as a 12-year-old optimist starts to see that the eco-totalitarian world isn’t the great place he thought.

Wagner, Erin K.: When Home, No Need to Cry

Collection of stories about the quiet things that haunt us. Volume 85 in Aqueduct’s Conversation Pieces series.

YA space opera novel. An 18 year old cyborg princess dreams of freedom and adventure, which she might get, after being captured by space pirates.

Charles Coleman Finlay grew up in Marysville Ohio, and has lived in central Ohio for most of his life. His first published story was “Footnotes” in F&SF in 2001. Finlay’s fascination with history informs much of his writing. Novella “The Political Officer” (2002) was a finalist for the Nebula and Hugo awards, as was follow-up “The Political Prisoner” (2008), which was also a finalist for the Theodore Sturgeon Memorial Award.