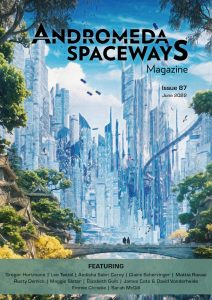 khōréō continues to publish strong fiction related to themes of immigration and displacement. My favorite of the Summer issue is one that shades into horror, “Banhus” by M. E. Bronstein. Alice starts dating the Word-Eater who is particularly interested in what she remembers of her grandmother’s Yid­dish. He invites her over to his oddly large house, where she becomes trapped, spiritually bound to the house along with many of his other victims. I appreciate the layers and nuances of how language can both constrain and also liberate depending on how it is used – there’s a clear indictment of colonialism here. I’m also always pleased when I see a story really commit to the consequences of its narrative and extend the story out far enough to really see them through. “Banhus” cares not just about Alice’s immediate plight but also about the other women ensorcelled in the Word-Eater’s do­micile. Another story that is clearly horror is “The Scumbling” by J.C. Changmore. Eliza is a young girl when her artist mother commits suicide. While her father descends into despair and alcoholism, Eliza is possessed by her mother’s spirit and starts making brilliant art. Unfortunately her mother de­mands blood sacrifices to stay, starting with a pet mouse and getting larger from there. The narrative voice is appropriate for the age of the protagonist and also, therefore, incredibly creepy.

Andromeda Spaceways has two stories involving interactions with oppressive societies. “A Lan­guage Older than Ears” by Gregor Hartmann is a murder mystery set in a botanical garden. Investigator Philippa Song is a member of the indigenous Zephyr population, but the gardens are largely created by and for the colonizing Tensen. The murder comes at a sensitive political time, which threatens to upend Song’s investigation at several points. At the same time, she’s worried about her mother, languishing in a nursing home with her mind mostly gone. The story has enough breathing space for both storylines to play out. In “White Tulip” by Claire Scherzinger, people are conspiring to escape an oppressive world where xenon is a feel-good drug provided liberally by the authorities. The narrator and the leader of the resistance have to help each other avoid the xenon trap and stay focused on the end goal. I had no idea xenon could have that effect on humans, so that was interesting to learn.

Two other stories involve rather unconventional romances. “Sweat, Blood, and Tears” by Andi­sha Sabri Carey features Elizabeth, bound to be married to the strange Dr. John Carrington. She is dismayed by the prospect of having to marry but has little choice in the matter. When Dr. Carrington reveals himself as a flesh-of-virgins-eating monster, it’s only slightly more disgusting to her than “nor­mal” marital relations would have been. There are so many levels of wrong here, it’s almost delightful. Then in “Heart of Grass” by Mattia Rarasi, a woman develops a very intimate relationship with an animate tree. Her life gets complicated when her first pregnancy appears to be from the tree instead of from her husband, but she is incredibly resourceful in dealing with it. This story starts out Weird and gets darker as it goes. 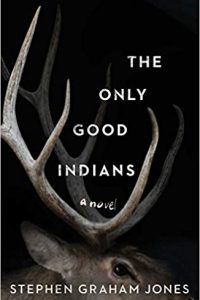