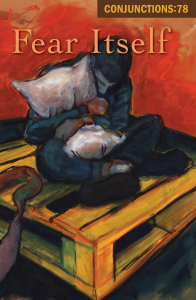 My first reaction to picking up Fear Itself, the Spring 2022 issue of the long-running anthology series Conjunctions, was: why? Given everything that’s happening right now – the worsening effects of climate change, never-ending viral pandemics, wars in Ukraine and Tigray, and inflationary pres­sures forcing so many to go with so little – what more needs to be said about fear that we aren’t already intimate with? But as Bradford Morrow re­minds doubters like me in his Editor’s Note, “Fear is ubiquitous in our myths and fairy tales, songs and theatre, art and literature, and the historical legacies of every culture.” Whether we want to or not, as a species we can’t help but respond and react to the fear that surrounds us, through the me­dium of art. Who better to speak to our anxieties, our paranoia, our terror than thirty talented poets and authors, several of whom have spent their careers exploring this most primal of emotions?

The anthology begins with two vignettes, “The Sense of Lack” and “The Oneirists”, by Polish film director and poet Bronka Nowicka (translated by Katarzyna Szuster-Tardi). The surreal nature of these fragments, steeped in violent, discomfiting imagery, not only establishes the anthology’s tone but foreshadows the experimental and provocative quality of the fiction we’re about to encounter. Also short and packing a punch is Stephen Graham Jones’s “The Nature of the Beast”, a tight third-person narrative that succinctly and effectively portrays the manic, jumbled thoughts of Tina, terrified by the perceived, subtle changes to her environment. Bennett Sims takes a similar stylis­tic approach to Jones with his remarkable story, “Introduction to the Reading of Hegel”. Presented as a single long paragraph, we are privy to the stifling perspective of “the reader,” an academic wrestling with his application to an exclusive Fel­lowship. While I could quote multiple passages for being brilliantly observed about academia and laugh-out-loud funny, one passage in particular uncannily reflected the fear I experienced when drafting my Master’s thesis: “Maybe if you had read Quine, a voice inside his skull had said one night, you would be able to write this letter, and then, Maybe if you had read Spinoza. You’ve never even read Spinoza, he had thought, and then, But what about Ryle!”

Echoing Morrow’s “Editor’s Note”, several of the stories take their inspiration from myths and fairy tales. Julia Elliot’s “Flying” is this visceral, grisly, subversive take on the magical “hag” – “all skins and bones and rancid rags, crimped hands resembling bird claws, talons that snatch babies up by the scruff of their necks.” While Michael Harris Cohen’s “A Propitiation” imagines a dis­tant future where what’s left of humanity believes that salvation can only be achieved through human sacrifice carried out by bespoke, “sublime” killing machines made from wood, rope and steel. But the stand-out story with a mythological bent is Monica Datta’s “Ben Turns into the Botusflem­ing Hedwigkraken”. As the wonderful title makes clear, the tale is about Ben – a tennis pro who hit his head at the US Open, ending his career, and is now coaching students at a Z-tier University – and his slow, inevitable transformation into a mythological sea-creature. Datta breaks the story up into 25 sections, each headlined by a phobia starting with “Agliophobia” and then progressing in alphabetical order (Bathophobia, Cheimatophobia, Dermatosiophobia, and so on). In a feat of storytelling ingenuity, Datta subtlety weaves the subject of each phobia (many of which I had to look up) into its corresponding section while never diverting the reader away from Ben’s metamor­phosis or, in one terrific section, the titanic rivalry between John McEnroe and Björn Borg (referred to as the Swede). If I had to single out a favourite story, this is the piece I would choose.

Fear Itself also features terrific fiction from fa­miliar names like Joyce Carol Oates, Jeffrey Ford, and Brian Evenson. Oates’s “The Baby-Monitor” draws a considerable measure of terror from the early days of motherhood (“If you would know fear, bring a baby into the world”) by focussing that fear on an all-seeing baby monitor. Parent­ing is likewise central to Jeffrey Ford and Brian Evenson’s creepy and strange contributions. In “Gate 9”, Ford takes the distress of losing a child at an airport in a surprising, absurdist direction, while Evenson’s “Good Night, Sleep Tight” puts a frightening spin on a mother’s bedtime stories. Equally, the anthology showcases Genevieve Valentine’s talent in getting under the reader’s skin with her story “Gimmer” and Rick Moody’s breathtaking control of language with his piece, “The Order of the Flaming Crows”, a glimpse into the disorderly yet cogent thoughts of a tor­tured mind.

The best anthologies, though, introduce us to new writers – or at least writers unfamiliar to the reader. I’ve already mentioned Julia Elliot, Mi­chael Harris Cohen, and Monica Datta, but I was also impressed with Brandon Hobson’s “The Seed of the Wicked”, Akil Kumarasamy’s “Watch Your Sister Disappear”, Tori Malcanigo’s “Remember When We Were Holy”, and the experimental poetry of Jessica Reed. To top it all off, the anthol­ogy’s one piece of non-fiction, Troy Jollimore’s “Behind the Curtain”, is this brilliant, personal essay that draws fascinating links between two horror movies (as defined by the author) The Wizard of Oz and Barton Fink.

While some of the stories and poetry were a bit opaque for my tastes, that’s not entirely surpris­ing when the anthology in question is striving to do more than make a series of banal observations about our relationship with fear. To that end, Fear Itself certainly succeeds. 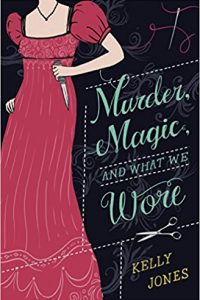 Carolyn Cushman Reviews Murder, Magic, and What We Wore by Kelly Jones