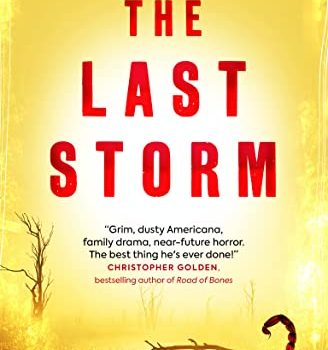 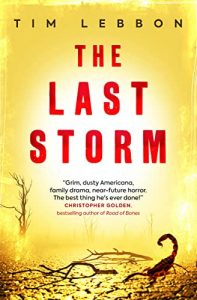 One of the most amazing things about horror is that tropes can become fresh, unique beasts in the hands of the right writer. Years ago I was sure the zombie genre was dead, no pun intended. Literature about the undead had already done it all and there was no way a new zombie horror novel could make the groaning shufflers feel fresh… and then along came John Hornor Jacobs’s This Dark Earth and proved me wrong. A few years later I was convinced werewolves were done, a thing of the past. Then along came Stephen Graham Jones’s Mongrels and took werewolves into a new place and made them feel new. Now Tim Leb­bon has done the same with the post-apocalyptic novel about survivors trying to get by in a dry, dangerous, sun-scorched earth. The Last Storm is a complex, imaginative, surprisingly touching novel about a young woman with a special gift that feels like a curse, and the parents looking for her through a seared landscape of a devastated, dry America.

Global warming is out of control. Water is incredibly rare in most places and destructive deluges affect other areas. As a result, large parts of North America are known as the Desert, desolate places where famine and drought have changed the way people live and turned them into a new breed of human that’s untrusting and prone to violence. Across these devastated land­scapes, a young woman named Ash is traveling with a guitar case full of odd things and spare parts. She’s on a quest to build an apparatus that will allow her to tap into something inside her, something that brings rain. If she pulls it off, she can change everything.

Jesse lives alone with his dog in a small home, far from civilization and haunted by the ghost of the daughter he’s sure he killed – Ash. Just like Ash, Jesse used to be a rainmaker, but the rain he brought down changed from water to things like scorpions and snakes, and that forced him to stop using his gift. When he thought his daughter had his same gift, he did something that he’s convinced lead to Ash’s death. That event was also the end of Jesse’s marriage to Karina, who has dedicate the nine years since the fateful event to looking for her daughter. Now she comes to Jesse to let him know she thinks Ash is still alive and plotting to start rainmaking again. Afraid of what their daughter might rain down on the world, Karina and Jesse team up and set out to find their daughter. Unfortunately, they aren’t the only ones interested in Ash, and the Desert is an unforgiving place, even before Ash starts bringing down death from the skies.

Lebbon is a household name because he’s a great storyteller, and The Last Storm finds him in fine form. In fact, this might be one of his best novels, and that’s saying a lot. Packed with action, horror, and tension and populated by a colorful cast of well-developed characters, this narrative shows that climate fiction can be a warning without being preachy and that family drama can add a layer of emotional complexity even to stories about strange beings killing each other is a parched world.

The Last Storm is immersive and sprawling in unexpected ways. The story is told from the points of view of Ash, Jesse, Karina, and two other char­acters, Cee and Jimi, that would force me to give away too much of the story if I discussed them here. The result is a mosaic novel that bounces from voice to voice and remains engaging to the very last page. However, perhaps the crowning jewel that makes this a must-read for fans of horror, dystopian, and climate fiction is the way climate and rain become central characters that affect the narrative in a plethora of ways. Yes, this is entertaining, action-packed, and clearly fiction, but it’s also a near-future story that is very plausible, and that turns it into a warning that’s hard to ignore.

Readers can enjoy The Last Storm’s violent, pulpy side, which will take them on a road trip across a desperate, broken country where even drinking the wrong water can kill you, but they can also enjoy the thought-provoking side of it, and start paying attention to the things that can be done to prevent a future like the one shown here. This duality makes this a great novel, and shows that Lebbon is far from done, even after claiming a spot among horror’s contemporary greats a long time ago.