From author Phoebe Wagner comes an intriguing cover for When We Hold Each Other Up out this April from Android Press.

One rule oversees the post-apocalypse: never refuse a Harmonizer.

Storytellers claim there are two original stories. When a stranger named Eduardo, a Harmonizer with extraordinary powers, arrives with a warning, Rowan senses life is about to change. Eduardo warns that Haven City is growing and all those living in the expansion zone are in danger.

As the living world recovers from ecocide, the Harmonizers control cities to keep the human population in balance. But while the Harmonizers claim their actions are peaceful, Eduardo says they’re taking too much and returning to the patterns that caused the world to warm.

Rowan decides to head out with Eduardo on a quest to warn others living in solarpunk communities that have fallen within the newly expanded city limits. Along the way, Rowan collects stories of survival and realizes fleeing the city will only encourage its expansion. Rowan and Eduardo must face the harm buried deep in their pasts if they’re to have any hope of bringing the city to a halt. 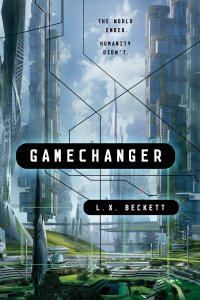 Jeffrey Alan Love is an award-winning artist and writer whose clients have included The New York Times, TIME, The New Yorker, Tor, Gollancz, Scholastic, HarperCollins, and others. Nominated for the World Fantasy Award, the British Science Fiction Award, the British Fantasy Award, the Chesley Award, and the Spectrum Fantastic Art Award, he has won a gold medal from the Society of Illustrators and two Academy of British Cover Design Awards.