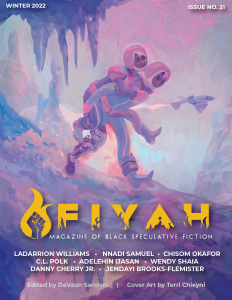 Magazines this year must have gotten the memo that I really like food-centered speculative fiction, because Fiyah’s latest issue is food and cuisine themed. In Lina Munroe’s “The Usual Way”, Danae wants to recreate a recipe of her mother’s in order to capture some of the magic her mother wielded before she died. As she works with her aunt to perfect her technique, though, she begins to see that it’s not just skills in the kitchen she needs to learn – it’s life itself she needs a bit more experience with. Because in order to master the recipe, and har­ness her mother’s magic, she has to become more of her own person, has to begin to master herself, and Munroe does a great job of showing that work, that slow process that begins to pays off in more ways than how well she can make a cake. It’s a triumphant and joyous story. A.M. Barrie focuses on some more grim and uncomfortable themes in “Just Deserts”, which follows George Washington’s chef, Hercules Posey, through his time in and out of the President’s enslavement. History is tweaked as here Hercules has a magical gift that allows him to infuse his will into the food he cooks – a useful skill for gaining power and influence in the household as well as a weapon used on occasion to punish the wicked and corrupt that come through the Washingtons’ dining room. Barrie powerfully builds the story and dilemma of Hercules, his relative power and comfort but also the harsh reality of slavery that he cannot fully escape so long as he works in servitude. The framing of the piece is effective, too, the story unfolding as a confession, a kind of setting the record straight, letting readers grapple with the full implications of the tale. It’s staggering and insightfully done. Moving to the poetry of the issue, Monique Col­lins pens a piece not just about food but also place and feeling and family in “The Recipe for Time Travel”. As with Munroe’s story, Collins links memory and flavor and a kind of magic, using food as a gateway over distance and time, connecting the narrator back generations to where their roots touch deepest, and all points in between. The piece hints at deeper magics that might be unlocked yet, through connecting back in food and in language, unlocking secrets that trauma and displacement have strained but not fully erased.

It’s a rather bittersweet moment, covering the final issue of Fireside Magazine, bitter because it’s always sad to say goodbye to a publication I’ve very much enjoyed, and sweet because there’s still this last issue full of stories to savor. Like Somto Ihezue’s “Like Stars Daring to Shine”, which features the Earth gripped in a new ice age where only pockets of humanity remain. A boy named Zaram lives in one such pocket, but doesn’t think about it much until a girl, Kiki, knocks him out of his idleness and opens his eyes to both the fragility and strength of the world. Ihezue captures a sense of imminent danger, everything hanging on a thin thread of community and inequality, while also showing that people, and the natural world, are full of surprises and resilience. The piece challenges what recovery can look like, and through the grim implications of the ravaged Earth and all its coldness, there remains some warmth to find in the story. “Six Goats” by Isabel Cañas tells a story of conquest and survival as two women, Yessenia and Nuria, live enslaved under a colonizing princess. Through the horrors of occupation, they remember the stories of magic that have now been suppressed, and when grisly revolution places them on the wrong side of a bloody situation, it’s that magic, and the bond they share, that they turn to in their need. Cañas doesn’t shy away from the violence and chaos of colonization or revolution, but also centers the power of memory and storytelling in the face of historical erasure and genocide, to keep a spark of magic alive enough for Yessenia and Nuria to keep reaching for a dream of freedom. WC Dunlap closes out the issue with a sensual and wicked twist on fairy-tale cooking in “Grits, Goblins, and Good Times”. In it, Cook is a woman who waits for the hungry, living in a quasi-magical realm being overtaken by gentrification. She lives with her goblin lover, and the two keep their passions alive along with their hungers as they try to help others who find their house and pay the price. Cook isn’t a fairy godmother, though, and when a couple comes into her kitchen and disrespects her food… well, watch out. The piece deals evocatively with both sex and food, and adds a dash of magic and blood to keep readers on their toes for an unforget­table final bow for Fireside.

I’ll close out my coverage this month with a quick stop at GigaNotoSaurus, whose July story was the second-world fantasy “Hydroplaning” by Peter Medeiros. In it, Birrs Escio is a company man sent to a frontier town that’s been operating without the support of magic for some time, in order to judge if it would be a good investment. Balancing the obvious desperation of the townsfolk, the rather predatory policies of his employers, and his own thoroughness as an investigator is no easy task, however, especially when there are some disturbing mysteries sunken in the bordering lake. Medeiros crafts a compelling and grim mystery where Escio finds himself mired in shocking revelations, dangerous intention, and vengeful gods, and it makes for one heck of an adventure.