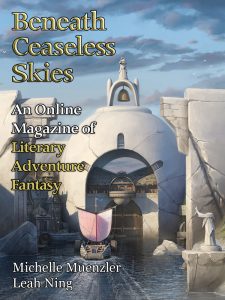 Moving over to Escape Pod, June saw the release of “Love and Supervillains” by Caroline Diorio, which finds in Rosalind a narrator who was mostly just trying to enjoy her life through personal independence and lots of casual sex until the guy she hooked up with turned out to be a superhero whose bodily fluids had some… unex­pected consequences for Rosalind, who is now a kinda-sorta supervillain. The story comes across as a confession of sorts, though not one bogged down by remorse. Instead, Diorio embraces the wicked and free spirit of Rosalind, not shaming her for her desires nor ultimately condemning her for acting on them. There is a wild freedom and joy that runs through the narrative, refusing to bow to the supposed established moralities of power and desire.

There’s some good news from Strange Horizons as they’ve fully funded their 2023 content (including two poems a week and three special issues for next year), and as part of their fund drive there’s also extra content to cover, including the wonderful “You, Me, Her, You, Her, I” by Isabel J. Kim. Valentine has died, and yet the technology exists to mostly fix that – her body is already reconstructed, though her brain will take a few months to fully sort out. In the meantime, so that people don’t notice the gap, her body is inhabited by a newly created AI designed to contain enough of Valen­tine’s data to pass. That might have been easier had Valentine not been a graduate art student. The story explores what it means to create art as well as inhabit a body, to be someone without identity and yet expected to pretend to have someone else’s. It’s complex and it’s a bit haunting, but Kim digs deep into the narrator, past the shell they are supposed to be and into the being underneath, one who is struggling with the demands of their assignment and the complex web of identity, authorship, and personality.

Rick Hollon tells a beautiful story of place and trauma in “That Old Sweet Water”, where Charlie has just buried xer parents and inherited their house, only to find that it’s not without cer­tain strings. There’s a person who wants to buy the water rights, who might be some sort of fey lord, and Charlie has to muster some tenacity and face more than a little trauma in order to navigate the dangers around xer. Hollon reveals a messy family history of abuse and distance, and a present for Charlie built on something much more supportive and loving, which acts as xer anchor when things start getting really weird. On the poetry side of things, Devin Miller explores something like a happy accident in “The Malachite Storm”. Of course, the storm itself isn’t really happy, driv­ing people to seek shelter from the dangerous precipitation. Rather, the poem looks at how the fact that the storm was unexpected was fortunate, because it caused people to draw together, to help each other, rather than to isolate and hunker down ahead of time. Miller looks at how that makes a difference, where enough warning can push people apart rather than coming together as a community. “A Slow Apocalypse” by Shreejita Majumder takes a different angle of approach on a similar idea, casting two people at the end of the world. They both are and are not broken by the coming destruction, by the prospect of being split asunder, and they run from it, trying for more time even when it seems hopeless. That’s because any extra time is what they have, defiant in the face of ultimate destruction, and it’s precious enough to fight for, to run for, even knowing that the end can’t be escaped.

Moving into July, Sharang Biswas reveals a wrenching and beautiful question of monstrosity in the poem “What is a Monster?” The ques­tioning nature of the title is incredibly important to my reading of the work, which is narrated by someone who sees in themself and in their mother something that might be monstrous, who is asking because they must be internalizing the words oth­ers would use to describe them. Biswas captures a kind of innocent curiosity and need that demands answers and finds them in the physical form of their mother, who has tried to protect them from the pain and violence she has known because the world saw her as dangerous and vile. It’s sharp and biting, with a deep tragedy that echoes in the title and long after the poem concludes. It also flows very nicely into Eugenia Triantafyllou’s story “Bonesoup”, which unfolds around a nar­rator who learned cooking from her grandmother. According to said grandmother, you must eat the thing you want to improve – bone broth for strong bones and fried brains for passing tests. And, to maybe save her grandmother following a heart attack . . . something rather grim. There’s a subtle sense of magic and a growing horror that Triantafyllou captures in the prose, evoking witches and their bubbling cauldrons, but there’s also a sense of family and care, regardless of how grisly the meal or sinister the appetites.

Beneath Ceaseless Skies’s final issue from June focused on action and adventure, with characters working to protect those they care about while taking big risks with their own lives and bodies. Running with that, Leah Ning’s “Witchbreak­er” follows Rennie, who is part of a team that down dire threats capable of wiping out towns and cities. Protecting those she loves comes at a price, though – entering into a witch’s embrace to kill them takes witchbreakers outside of normal time, and returning from a mission means finding everything left behind aged weeks or months or even years. The action is intense and visceral, and through it Ning interrogates sacrifice and the urge to take on pain and loss in order to spare others, showing that it’s often a way of avoiding the pain of confronting loss, fear, and uncertainty. Instead, sometimes the bravest actions are to share danger and risk and vulnerability, rather than trying to horde them in the name of sparing others. The first issue of July, then, maintains the focus on action and danger with two stories that unfold in the midst of huge conflicts, featuring characters forced to face the horrors and crimes of war on intimate and staggering scales. 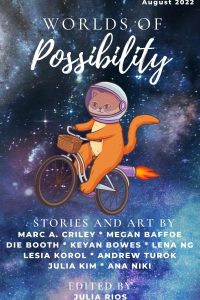 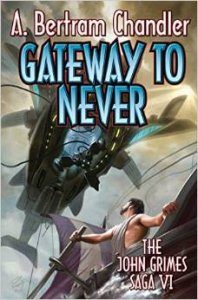