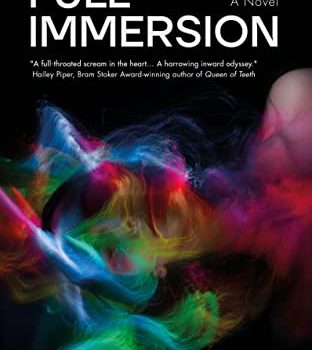 SF horror. A traumatized woman with amnesia finds her own dead body and sets out to uncover the truth of her demise.

Horror novel. Paul Dunstan changed his name and left his childhood village, with its mysterious fellstones on the village green, and the strange, controlling family that adopted him. But his estranged step-sister has found him, bringing dark secrets from his childhood.

Gothic horror novel set in 1941 London, where Violet works in subterranean War Rooms. Something is wrong with her memories, and there’s a room only she can see.

Queer gothic fantasy novel. A noble-but-outcast vampire hunter considers whether he should be on the vampires’ side.

Eshun, Ekow: In the Black Fantastic

Art book, an illustrated exploration of Black culture collecting imagery from the African diaspora that embraces the mythic and speculative and Afrofuturism. Essays by Michelle D. Commander, Eshun, and Kameelah L. Martin.

Fantasy adventure novel. Inter-planal errand boy Siyon Velo accidentally performs a public act of impossible magic in a city where inquisitors have clamped down on such acts.

Gumá, Mariana Osorio: When You Get to the Other Side

Paranormal romance novel about a love triangle in a strange hotel with ghost-like residents.

Fantasy mystery novel, the 14th book in the Magical Cats series. A local baker is wrongly accused of a contentious in-law’s death.

Young-adult Gothic horror novel. Tagging along with her mother’s honeymoon, Addie gets stuck on a haunted tropical island and must unravel its secrets to escape.

Collection of eight stories, each surreal, or magical realism, or with speculative elements.

The book’s delicious assortment of surreal and conventional stories speak to the same themes that informed Severance: the otherness and alienation felt as a Chinese American and as a woman.

Gritty fantasy novel. First book in the Glacian Trilogy. A human village is controlled by winged Glacians, who steal souls to make their herd docile—or hunt them for sport.

Historical fantasy novel of a white-passing bruja and illegal jazz club owner in the 1920s who deals with the crooks running the city while hiding her identity and magical abilities.

Epic science-fantasy novel, third in the Locked Tomb series. Nona woke up in a stranger’s body, and she’s afraid she might have to give it back.

If you loved Gideon and Harrow, will you love Nona? And: obvs. You already know.

Nona the Ninth is very on brand in that it completely scraps the previous book. That’s right: all that painstaking lore and the complex relationships and shifting webs of allegiances you spent hundreds of pages learning? Right out the window.

And – still on brand – it works, somehow.

Upper middle-grade fantasy novel. Kids join forces to rescue siblings who have been “windswept” away. Illustrated by Armando Veve.

Non-fiction, a combination of literary musings and memoir offering a tour of often-overlooked books (fiction and non-fiction) that influenced Russell, himself a booklover, author, and co-publisher of supernatural fiction at Tartarus Press.

Humorous SF mystery novel, sequel to The Great American Deception. PI Frank Harken and his coffeebot/partner follow clues, searching for whoever is trying to blackmail one of the Great American Mall’s biggest infleucecelebs.

Humorous horror novella about a vampire determined to resurrect her deceased friends.

New in Paperback, October to November

November 16, 2013 admin Comments Off on New in Paperback, October to November

Several things kept me sane over the last 12 months. My family, the privilege of having a job while in lockdown, the Backlisted and Coode Street podcasts (particularly Coode Street‘s “10 minutes with” series), and the books I read. Yes, there were times in 2020 where I struggled to read more than a handful of pages, but the novels, novel­las, and collections I did complete (47 of which I reviewed