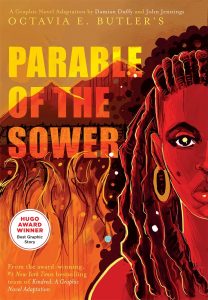 The graphic novel adaptation of Octavia E. Butler’s Parable of the Sower won the 2021 Hugo Award for Best Graphic Story or Comic. Damian Duffy & John Jennings, the team behind the 2018 Eisner-award winning Kindred: A Graphic Novel Adaptation, are well-versed in adapting Butler’s work, and have produced another impressive achievement in Parable of the Sower. This adaptation of Butler’s 1993 groundbreaking dystopian novel feels of the moment. The year is 2024, the US is mired in social chaos and beset by environmental and economic crises – yes, when Butler wrote this in 1993, it was fiction. Lauren Olamina, a preacher’s daughter and empath living in Los Angeles, loses her safe community and must flee, embarking on a perilous journey that leads to a new vision of human destiny and the birth of a new faith. The urgency of her ex­perience – and the undeniable connections to issues that plague us right now – is ably communicated in the glossy pages of this powerful graphic novel. The dynamic, expressive artwork makes the story newly accessible to a new generation of readers. At 288 pages, including Duffy and Jenning’s discussion of their adaptation process, this book packs a lot of bang for the buck.

Across The Rainbow Bridge: Stories of Norse Gods and Humans by Carnegie Medal winner Kevin Crossley-Holland, illustrated by Jeffrey Alan Love, is a companion volume to the YA book Norse Myths: Tales of Odin, Thor, and Loki (2017), and takes young readers on a visit to ‘‘an ancient world of magic, mythology and mountain trolls.’’ Love’s distinctive imagery and limited palette – enlivened by occasional touches of red or yellow – set the somber tone of this volume’s tales. The book offers nicely calibrated design features, including endpages featuring a Love illustration. The artist has received many awards including World Fantasy Award for Best Artist, the British Fantasy Award for Best Art­ist, a gold medal from the Society of Illustrators, and two Silver Spectrum Fantastic Art Awards. He is the author and illustrator of The Hero’s Quest, The Thousand Demon Tree, The Mountain of Smoke, and Notes from the Shadowed City.

Original Spectrum editors Cathy Fenner & Arnie Fenner take back their Spectrum series, beginning with this new limited-edition quarterly publication – a placeholder until next year’s annual – offering feature articles on artists and deep dives into their work. The cover feature on Dan Dos Santos focuses on his iconic cover art for Patricia Briggs’s Mercy Thompson books about a shapechanger coyote mechanic and her involvement – romantic and other­wise – with werewolves, vampires, and the fae. This feature, cowritten by Briggs and Dos Santos, allows fans to enjoy learning about the development of Dos Santos’s cover artwork, with preliminary sketches and finished works generously featured across 27 full-color pages.

Karen Haber is the author of nine novels including Star Trek Voyager: Bless the Beasts, and co-author of Science of the X-Men.

She is a Hugo Award nominee, nominated for Meditations on Middle Earth, an essay collection celebrating J.R.R. Tolkien that she edited and to which she contributed an essay. Her recent work includes Crossing Infinity, a YA science fiction novel of gender identity and confusions.