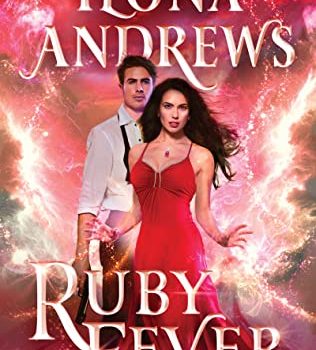 Paranormal romance/urban fantasy novel, the third in the trilogy featuring Catalina Baylor and sixth overall in the Hidden Legacy series.

Fantasy novel, the second in The Quest for Heroes series, about a hero who believes his reputation is undeserved.

Young-adult fantasy novel, first in a series about the island of Lightlark, where every 100 years the Centennial game is played by the rulers of six nations.

Humorous fantasy romance novel. Emerson Wilde wants to help her hometown thrive, but an attack awakens magical powers in her, and she discovers a magical side of town that had been hidden from her.

Humorous military SF novel, third in the Janitors of the Post-Apocalypse series. Marion “Mops” Adamopoulos and her team of janitors wind up fighting in an interplanetary war and making first contact with aliens.

Huff, Tanya: Into the Broken Lands

Fantasy novel. The Heirs of Marsan must enter the Broken Lands, once shattered by the mage wars, to save their people.

Dark fantasy novel. Mark is a Day Boy, a human servant to one of the dreadful Masters that rule the city.  Soon he will either be retired, or transformed into a near-immortal Master himself.

Dark fantasy novel. Vampire Lucy Westenra of Dracula and Mr. Rochester’s first wife from Jane Eyre fight against the toxic men in their lives after Jane Eyre herself turns up and frees Dracula in 1967 California.

Alternate history fantasy novel, a decolonial response to The Secret History and Jonathan Strange & Mr Norrell. Subtitle: or the Necessity of Violence: An Arcane History of the Oxford Translators’ Revolution.

Students are funneled into Babel. What comes out is the silver work (read: magic) that the British Empire is built on. Without the translators who create it – the process has to do with the resonance between similar words in different languages – several different kinds of hell will break loose and the Empire will likely fall.

Kumarasamy, Akil: Meet Us by the Roaring Sea

Near-future SF novel. A grieving computer programmer reads an old Tamil manuscript about women surviving drought and war and re-evaluates her only life.

Fantasy novel about British witch Mika Moon, who “pretends” to be a witch online, and is asked to help three young witches learn to control their powers.

Fantasy novel about a coven of misfit octogenarian witches in debt, targeted by men who want their manor for a “Men’s World” recreation center.

Young-adult gothic fantasy novel. A young weaver makes a deal with a spirit to fix her loom — and gets more than she bargained for.

Horror novel. Ricky wakes up with someone else’s hand instead of his own, and slowly other body parts start being replaced as well.

Weird Western hard-boiled detective novel set on Texas gulf coast in 1888. Chicago PI Shannon, in Texas for a wedding, is asked by a rabbi to find Nathan Silverberg, gone missing along with some swindlers.

[I]t’s one of the mostly deeply weird novels I’ve read in some time, at times hallucinatory and dreamlike, at other times gritty and naturalistic. We’ve heard a lot in the past several years about genre-blending or “cross-genre” fiction, but Wexler starts out by combining two genres that seldom come up in these discussions: the western and the hard-boiled private eye mystery.

Gothic horror novel. Cherry LaRouche is forced to return to her childhood home in Darling, Louisiana with her children, and after bodies of murdered children turn up, Cherry’s own daughter goes missing.

On a September morning in 2001, I watched from my fire escape in Brooklyn as the second World Trade Center tower fell. In the hours and days and weeks that followed, as the ash and debris rained down from the sky, as the stench of death permeated my neighborhood, as the countless hand-written missing person fliers went up, as soldiers with machine guns began to appear in train stations, I