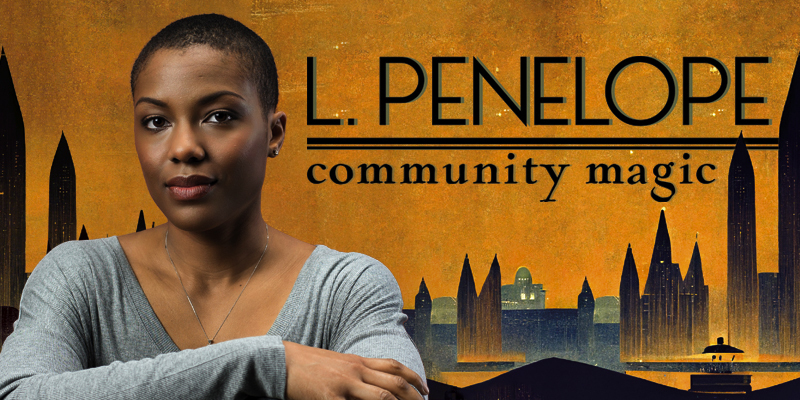 Leslye Penelope James Reaves, who writes as L. Penelope and Leslye Penelope, was born April 18, 1978 in the Bronx in New York. Her family moved around when she was young, living in Washington DC and New Jersey before settling in Maryland when she was nine. She attended Howard University in Washington DC, where she studied film and computer science, and went to graduate school at Cal State Hayward (now Cal State East Bay) in California, where she studied multimedia. She has since returned to Maryland, where she lives with her husband, writes, and works as a website developer.

She co-founded literary magazine The Quotable, which ran for six years before closing in 2017. She is also an award-winning independent filmmaker.

Penelope initially self-published series the Earthsinger Chronicles, later picked up by St. Martin’s Press: Song of Blood & Stone (2015), Whispers of Shadow & Flame (2015), Cry of Metal & Bone (2020), and Requiem of Silence (2021); she also wrote three novellas in the series, which are included in the collection The Complete Earthsinger Chronicles Novel­las (2021). Her Eternal Flame series, Angelborn (2015) and Angelfall (2015) was self-published, as was Savage City (2022) in the Bliss Wars series. Her Cupid Guild stories were collected in The Cupid Guild: The Complete Series (2020).

Her latest book, historical fantasy The Monsters We Defy, is out this August from Orbit.

“I grew up loving the classics like The Secret Garden and Jane Eyre, but I read basically everything growing up. One of the earliest fiction things I can remember is Virginia Hamilton’s series Justice and Her Brothers. I read those books over and over again. It wasn’t until college that I got more into science fiction and fantasy. Growing up, speculative stuff that I took in was more television – The Twilight Zone, Outer Limits, Tales from the Crypt, things like that. I wasn’t reading a ton of SF, but I did read whatever was around.

“I was reading things I was too young to read at an early age. I gave a book report on Beloved in sixth grade. Someone let me read it and then do a book report about it. I was reading Stephen King really young – I read It in middle school, and I was terrified for months. We had a big library, and a bunch of bookshelves in our house, and no one was policing what I was reading, so I would just pick a book that looked interesting and start reading.

“I think when you’re just reading a contemporary story you can get a lot from it, but when you have the speculative elements, and you’re in either another world or you’re adding magical or speculative elements to our world, you can talk about things in a way that’s a little more removed. You’re holding up a mirror to our world, but it’s not exactly ours, so all of the same baggage does not apply. People are able to dig a little deeper without having themselves or their own beliefs challenged directly. They don’t feel attacked in the way they would if we were drawing an exact correlation: ‘Oh, the Republicans do this.’ But if you are having the orcs doing that, then maybe something will sink in, and they’ll get the point subconsciously. I love speculative fiction because of that – you can have this commentary that maybe people will read more readily than they would if you were just doing a one-to-one, completely realistic commentary on the situation.

“I’ve written my entire life, and everyone who knew me as a kid knew that I was a writer. I was always in writing workshops. Instead of summer

camp I went to writing camp, basically. I was into literary magazines in high school and college, all of that. But there are two stages: as an adult, I was just writing for me. I wasn’t writing for publication until I got married and we moved – immediately – to another state, Virginia. Being an introvert, and being self-employed, I was just in the apartment all day, and I didn’t get the chance to meet anyone. I decided to take these writing classes at a place in Norfolk VA called The Muse Writers Center, and that’s where I changed from just writing in notebooks for myself to thinking about someone else reading my work. I got into a workshop – an ongoing fiction workshop for three years – where I first started with short stories and then attempted to write my first novel, and that led into attending week-long workshops. I went to VONA twice – I worked with Junot Díaz the first year and Marjorie Liu the second year. And the Hurston/Wright workshop, I did that two or three times, week-long and then weekend workshops. At that point, diving into these workshops, I just started researching about publishing and thinking, ‘Oh, this can actually happen – this is something that’s possible for me.’

“The workshops were equally about craft and networking. There was a little bit of publishing information, but I learned things more from people I met at those workshops. I met people like Daniel José Older at VONA. I met writers who were all starting out at the same time, and I’ve kept in touch with. We’re on different journeys, but I still keep in touch with people who became a writing community. The community and network­ing aspects were probably the biggest thing, but I did get a lot of craft knowledge and information from them, as well. Even though I had been in smaller, local workshops, I was usually the only Black person or the only PoC, in general, in those workshops. Now I was having the actual audience that I was writing for critique and give me feedback, and work­ing with really amazing writers, was great. It’s a little bit of everything, but the craft really helped me. I still look at the notes that I took from the Junot Díaz workshop, just to refresh myself on those things that I learned. Those experiences were just transformational, craft-wise, also.

“At the same time, I started a literary magazine with some writers that I’d met in Virginia at the writers workshop. We started an independent mag called The Quotable, and because I brought computer skills, I was the publisher, and I was laying things out. I was also doing some editing for fiction and non-fiction. It was something that we ran for six years, and so I learned everything about self-publishing: how to make an e-book and how to lay out print books, and I was really interested in those things. That’s why, when I started writing things that became my first novel, I was like, ‘I’m just going to self-publish it.’ I did not really consider trying to get an agent or anything like that.

“Because of the workshops I’d attended – spe­cifically workshops for Black writers or writers of color – I’d heard all these horror stories about the industry, and about how they want to change what you’re writing, and I just didn’t want to deal with any of that. I already had the DIY spirit. I had done independent filmmaking and an independent literary magazine, and I thought, ‘I don’t need to do anything else; I’ll just publish it myself.’ It was 2015 when I self-published my first book, so it was early-ish and there was still some stigma about self-publishing. As a person who had done a lot of different things DIY, it didn’t matter to me – it was just like, ‘I’m going to tell the story I’m going to tell, and some people might think that it’s vanity, but I don’t care. I just want to put it out here.’ I was seeing people having success, and doing all this research as I was writing the book, I researched self-publishing for over a year, trying to figure out how people did all the different things – sales, marketing, publishing, e-books, all of that.

“I was happy self-publishing, and I was planning to continue, and then, almost exactly a year after I put out the first book, Song of Blood and Stone, I was contacted by Monique Patterson from St. Martin’s Press. That’s how my traditional publish­ing journey began. I realized, ‘Oh, maybe someone does want this, and maybe someone will accept the story that I’m trying to tell without trying to change anything I don’t want to change,’ and that became a possibility that I hadn’t really considered before. My experiences were very different. I’ve been re­ally fortunate to work with two Black female editors at different publishers. So none of those things that I had heard about, or that I was afraid of happen­ing, happened to me at all. I had other struggles, but nothing like that.

“In 2015 I put out four books in two different series, self-published: the Earthsinger Chronicles, which later went to St. Martin’s, and Eternal Flame, which remains self-published. I do still self-publish, and I really enjoy it. I like both – I like being hybrid, and I would ideally like to continue with both paths, having some books traditionally published, and some books self-published, because I know how to do things and I enjoy them. I like finding cover designers and working with them. I like finding an editor and hiring them and working with them, and doing the marketing. All the work you have to do when you’re self-published – I enjoy those things. It’s also very exhausting, so I really appreciate not having to do them for every book, and also the other things that come with a publisher, like be­ing in bookstores. There are certain opportunities that I only got once I was traditionally published, so those things are valuable to me as well. Having an outlet for both is good for my personality, and really works for me.

“Bookshelf space is so small, you know? And your book is only there for a few months if it doesn’t take off. There are upsides and downsides to tradi­tional publishing, but the discoverability is great. I’ve talked with booksellers, and I love bookstores. I love going to bookstores and supporting them, so if you’re in that ecosystem where you can get recom­mended, you can get found on the shelf, then that’s huge, because discoverability is hard, regardless of whether you’re traditional or self-published. 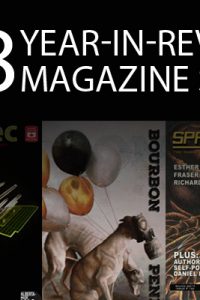 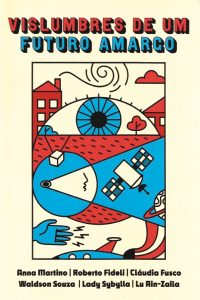 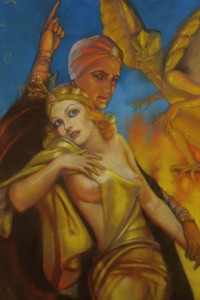