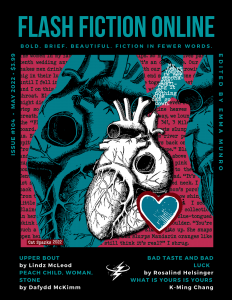 May’s GigaNotoSaurus story is “In the Time of the Telperi Flower” by David-Christopher Galhea, which on one level follows the harrowing story of an expedition to see a strange, time-bend­ing flower. The story is framed, however, as an annotated account of that expedition as told by its guide, embellished and published posthumously by an unscrupulous publicist, and annotated by one half of the queer couple that hired said guide to begin with. As such it’s a wonderful example of a nested narrative, all the layers working together to reveal the truth underneath the sensationalized version of the adventure, bringing full circle the loss and grief that began with a quest of love and became instead rooted in selfishness and fear.

Cast of Wonders’ May release was Beth Goder’s “One Day in Infinity”, which explores a day in the life of Walrus, the patron goddess of super­markets, indoor swimming pools, and self-service gas stations. While the premise might seem geared for humor, though, the story itself looks bluntly at burnout and exhaustion, at the toll of having to choose to save people or not, knowing that not everyone can be saved. Yet, even as the weight seems crushing, the story shows the power of friendship, care, and vital small acts of kindness, which are their own sort of magic. It’s a poignant and beautiful story about a very tired but ultimately unbroken goddess.

May’s Flash Fiction Online features a number of stories that revolve around the power of desire. In “Bad Taste and Bad Luck” by Rosalind Hels­inger, that desire has been twisted into something like a curse for Beccs, a young woman who fears her love is killing her best friend. The speculative element in the story is ambiguous but no less im­pactful and magical for it. The core relationship is complex, a bit messy, and wonderfully explored by Helsinger, who uses the idea of the curse to show how people take and abdicate control in the face of setbacks, complications, and losses. 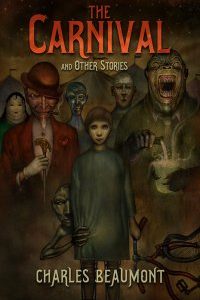