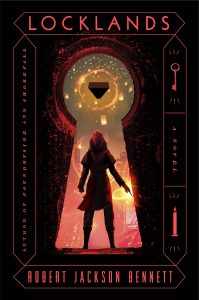 Locklands is the third and final volume in the Founders trilogy by Robert Jack­son Bennett, begun with Shorefall and Foundryside. It’s hard to talk about the last book in a trilogy without spoiling the first two, so consider yourself warned.

The central magical conceit of the series is scriving, inscribing objects with a magical script that alters their physical properties, sometimes in dramatic ways. A skilled scriver can create argu­ments that convince objects to behave in ways that are contrary to the laws of reality. In simple terms, this means they can do things like create cart wheels that roll forward by themselves on command, or city walls that can withstand any amount of damage, or unbreakable doors that only open for those with the right credentials. More powerful scrived objects, called rigs, can do more dramatic things, like convincing a crossbow bolt that it’s denser than lead and that it’s traveling faster than the speed of sound, or a suit of armor that it’s as strong as titanium but as light as cloth. The more you want to deviate from reality, the more complex and difficult the scriving is to ac­complish. In practice, scrivers are like computer programmers, but capable of programming reality itself on a limited scale. The world of the series is dominated by city-states run by groups of mer­chant princes called campos, who use the power of scriving to impose their will on everyone else.

The scrivers rule the world, but they’re nothing compared to the ones who invented the art in the distant past: the hierophants, who were capable of altering reality on a much vaster scale, and even of scriving humans, giving themselves powers like flight and invulnerability, though at a terrible cost. The hierophants nearly destroyed the world (and did destroy themselves) in a series of devastat­ing wars long ago.

In Foundryside, we meet the thief Sancia, who has the rare power to see scrived objects, which allows her to avoid traps and detection. She gets her hands on an ancient hierophantic artifact: a key capable of changing and overriding the commands created by other scrivers. That means it can open any door, disarm any trap, and hack through any defenses. Even stranger, the key has consciousness, and can talk to his wielder. The key’s name is Clef, he has no idea how he ended up stuck in a key, he doesn’t remember much about his past at all, and he’s an absolute delight; his close relationship with Sancia is one of the great joys of the series.

In the first two volumes, Sancia, Clef, and various allies work to bring down the oppressive regime of the campos. The stakes get way higher when the first of the hierophants, Craesedes Magnus, is restored to life. That is bad. He can alter reality at a fundamental level, he is ancient, he is inhuman, and he is driven by an ambition vast enough to burn the world down. Our heroes (including Sancia’s lover, the brilliant scriver Berenice) manage to fight Craesedes, but in order to do so, they have to transform their home city of Tevanne into a conscious entity: It basically becomes an immensely powerful artificial intelligence. Sure, it can stand up to Craesedes, but it also has its own goals and ambitions, and those won’t be good for mere humans, either.

In Locklands, set several years after the second book, Craesedes and Tevanne are locked in a brutal war, and the rest of the world is collateral damage. Tevanne is an ever-expanding, world-conquering entity that uses mind control to make people into slaves, and thinks nothing of sacrificing hundreds of human lives at a time to achieve its strategic goals. Craesedes is horrible, but he’s also the only check on Tevanne’s power… and when Tevanne finally captures Craesedes and imprisons him, the world seems doomed to fall to an inhuman intelligence. Meanwhile, Sancia, Clef, and Berenice have formed their own nation, Givia, with an armada of ships hidden in fog-shrouded islands, dedicated to mak­ing guerilla strikes on Tevanne’s forces and trying to save refugees.

Locklands is structured around a series of excel­lent set-pieces, including a ferocious assault on a city, a harrowing magical prison break, and a quest for an ancient artifact that Tevanne and Craesedes want to use for world-shattering purposes. In between, there are quiet moments of character growth, philosophical musings, and meditations on the consequences of trauma, grief, and loss. There’s also a lot of cool new stuff – like Tevanne’s ‘‘deadlamps,’’ terrifying aerial engines that can edit whole swathes of reality out of existence, and a powerfully augmented suit of armor that lets Clef operate independently at last, like a guy piloting a mech-suit. My favorite new element is the way the people of Givia use scriving technology to link up telepathically, so they can communicate silently, sense one another’s emotions, and even see through each other’s eyes. Some of them form affinity groups that function as gestalt intelligences, forming a unified mind with dozens of bodies: like Greeter, devoted to healing and helping morale; Design, a cold and pragmatic engineer; and Play, who takes care of the young and elderly.

Locklands is a great conclusion to the series, with enemies forced to ally against common foes, new revelations about the history of the world’s civilization, wrenching personal sacrifices, and a bittersweet finale. At heart, the Founders trilogy is about the uses of technology, and its potential to improve and elevate all of human existence, or to grind people down for the benefit of a few. It’s an excellent balance of big ideas, clever technological extrapolation (even if it’s actually magical), and compelling characters you really care about. Who could ask for more?

In addition to being a senior editor and occasional book reviewer at Locus, Tim Pratt is the author of over 20 novels. His short stories have appeared in The Best American Short Stories, The Year’s Best Fantasy, The Mammoth Book of Best New Horror, and other nice places. He’s a Hugo Award winner for short fiction, and has been a finalist for World Fantasy, Sturgeon, Stoker, Mythopoeic, and Nebula Awards, among others. He lives in Berkeley CA with his family. Every month he writes a new story for his Patreon supporters at www.patreon.com/timpratt 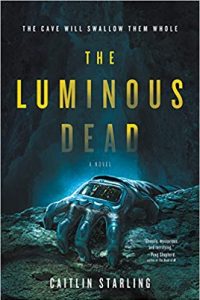