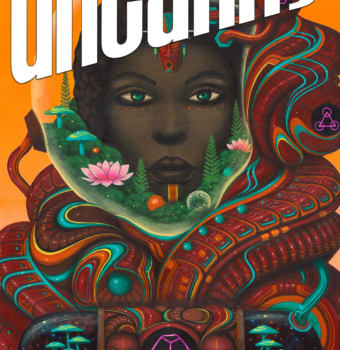 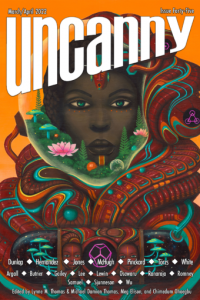 Near novella-length “Hearts of Stone” by Emma Newman (Tor.com 5/18/22) is a Wild Cards story about 18-year-old Kerry – who can turn living creatures into stone with a touch – joining up with Great Britain’s Sil­ver Helix as Stonemaiden. It’s great for those into George R.R. Martin’s shared universe, especially if they’ve kept up with the British iteration. They might get lost if not already tuned in.

Indrapramit Das mixes solid science fiction with sweet romance in the winning “Of All the New Yorks in All the Worlds” (Tor.com 5/11/22). Twenty-something Sid’s a “sticer” visiting his sixth version of New York City – the one in his own timeline – to meet up with an alt-version of his ex-girlfriend Aditi. Except that Aditi lived in a timeline other than his own, and this Aditi lives in his. Life and love can get com­plicated for a “spacetime-traveling romantic.”

Seanan McGuire’s “Mercy, In Rain” (Tor.com 5/4/22) provides more detail about events that occur in Down Among the Sticks and Bones, the second book of her Wayward chil­dren series, namely, how Dr. Bleak raises Alexis Chopper from the dead, and the beginning of her relationship with Jacqueline “Jack” Wolcott. It’s of particular interest to fans but stands well enough on its own.

Novelette “The Dominion of Leviathan” by Manish Melwani (Tor.com 4/13/22) is space opera set in a future where the Solar System has been ruled by the god Leviathan – once the planet Jupiter – and its cruel regent, Lord Ajax, for a thousand years. This unabashedly owes a lot to Gene Wolfe’s The Book of the New Sun. A good read.

Even if Stephen Graham Jones hadn’t dedi­cated “Men, Women, and Chainsaws” (Tor.com 4/20/22) to Joe. R. Lansdale, this tale of spurned love, a deserted Nacogdoches drive-in, a killer ’79 Camaro would have brought him to mind, and that’s not a bad thing at all.

Susan Palwick’s “The Long View” (Tor.com 4/27/22) is a charming fantasy about a manipula­tive student who insists on a university accepting a dragon as her support animal. It reminds us, a wise professor states, that “[u]niversities are places where people value very old knowledge a lot of society doesn’t care about anymore. They’re also places where people believe in what isn’t always visible.” Nicely done.

Although the premise can be summed up as “zombie sled race in the Norwegian Arctic,” Daniela Tomova’s “The Loneliness of the Long-Distance Reporter” (Tor.com 3/16/22) is substantially more. Yes, the undead are sled racing north – the titular reporter goes to Norway to get the story – but a there’s also a considerable amount of thought provocation about survival, inevitability, and individuality.

In “Hush” by Mary Anne Mohanraj (Tor.com 3/9/22), human jumpship flight attendant Jenny returns to her home world to discover anti-alien sentiment has uncomfortably increased. Providing a ride home for a neighbor alien girl leads them into danger. Jenny does what middle-aged moms do: deals with it. The story is a little didactic but satisfactory.

Dominica Phetteplace attempts epic sci­ence fantasy in less-than-epic novelette-length “Sword & Spore” (Tor.com 3/23/22), and for the most part she succeeds. Three gods ruled the Kingdom with magic, but now, as ecological disaster threatens, they have lost power. Cayhun, a young man who cannot read, has a chance to become king and transition the Kingdom into a republic. The moral of the story seems to be: “Sometimes you can only do your best and nothing more.” And never underestimate mushrooms.

Uncanny #45 is, as usual, a must read. Maureen McHugh’s superior “The Goldfish Man” is a very real story about Sima, a potter who, in the depths of the pandemic finds herself living in her car. She contracts the virus, and another street person, Lane, befriends her and helps her recover. Lane claims to not be human and only visiting the planet. Unless the reader accepts Lane as alien and not the “crazy guy” Sima, naturally, assumes him to be, the story’s only element of the fantastic lies in the anticipation of what happens after it has ended. Exquisitely and believably crafted, McHugh’s poignant story is unforgettable.

“Boundless” by Miyuki Jane Pinckard is another heart-rending tale. Terumi’s astronaut wife Anna is lost on Mars, but on their anni­versary Terumi hears her wife’s voice – and so do the couple’s dogs. It’s science fictional, but mostly it’s a touching story of love and grief and the faithfulness of dogs.

When the Kaleidoscopic Visitor appears, wearing red silk and glimmering gems, people go “wrong.” But when the adolescent narrator encounters the Visitor in Shaoni C. White’s “The Kaleidoscopic Visitor”, they give her something they say is what she wants made into something she can hold. But that is not the end of the Visitor, or of the narrator’s journey of self-discovery.

Carlos Hernandez’s “I Will Have This Diamond for a Heart” is an exploration of an afterlife. If for no other reason – and there are many others – read it for the context of this quote: “A book you love builds souls inside you. A writer you love feels like a friend: even if death has made it impossible for you to meet.”

Emma Törzs takes fairytale tropes and skill­fully twists them into “The Path of Water”. Awakened after a thousand cursed years, the beautiful queen and handsome king are not liv­ing happily ever after. Spells are not easy things to break, and this fairy tale offers disquieting possibilities rather than pat endings.

In “Flowerkicker”, Stephen Graham Jones quickly turns an innocent nature hike into sus­pense and a surreal scare. As always, he’s good at that sort of thing.

Margaret Dunlap’s “Requiem for a Doll­face” takes a maudlin axiom – “Toy’s hearts were simple. They were made to do one thing: love a child and teach love in return.” – and turns it into something upsetting, as a teddy bear investigates a doll’s murder.

The Deadlands #12 offers two new stories. “The Morthouse” by Maria Haskins is a stand-out. In northern Sweden the ground freezes so solidly that the dead cannot be buried. Their remains LOCUS June 2022 / 17 lie in a morthouse until the spring thaw. Gerda, grief stricken at the death of her only child, seeks to bring him back to life before spring puts him forever in his grave in a beautiful and surpris­ing tale. KT Bryski’s “This Is I” is based on the tragic life Elizabeth Siddal, best known as Dante Gabriel Rossetti’s model and later wife. It’s a disjointed story, in which we learn a “life of shadows” is more of a curse than death.

“Thirteen Goes to the Festival” by L Chan, from The Deadlands #11, is a fascinating story set in Dìyù, the realm of the dead, where we meet Auntie Thirteen, the most recent ghost in The Cloister of Unloved Aunties. Mistreated by the other, older twelve aunties, Thirteen looks forward to the Festival when the dead roam free. This is a tale about communication, love, and forgiveness with a delightful supporting charac­ter, Ah Ma. In the same issue, Josh Rountree’s “Their Love Smells of Blood and Terror” tells of an entity to whom townsfolk sacrifice a young girl to annually to assure a good harvest. But the entity is not even a god. She wants only her final death; all it would take to assure that is for a victim to refuse to be sacrificed. 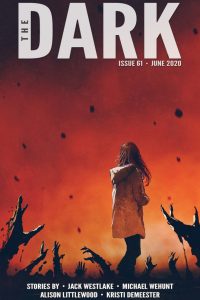