Arguably, all science fiction/fantasy works serve as a mirror to reality in some fashion. The Blood Trials is no different. When I wrote the novel, I sat down with the explicit intention of creating a world that perpetuated the worst aspects of Anti-Blackness, so that I could have a conversation on-page about the most pervasive and insidious bigotries that run deep in American society. It’s a conversation that I invite and hope readers will engage in with me; however, it is chiefly a conversation that was a reckoning and a long-time necessity I was having with my childhood, teen, and early adult self.

Each protagonist I write reflects who I am in some form. That statement is uniquely true with The Blood Trials. While a Science Fantasy, it is a novel that represents who I am on such a vulnerable level that I admit to experiencing a bit (okay, a large deal) of apprehension leading up to publication. Even though its protagonist, Ikenna Amari, exists in a fictional world, she very much lives many of the insecurities, generational scars, longings, fears, hurdles, and burdens of living in a world marred by the terrible legacy of the trans-Atlantic Slave Trade that I’ve faced as a Black woman throughout my entire life.

On the planet of Iludu, no, enslavement of Black people isn’t a thing. Yet, there was a thwarted attempt in Iludu’s past and damaging indoctrination is spread within the country Ikenna lives in that gives rise to pervasive Anti-Blackness that is undeniably akin to what is perpetuated in reality. In Mareen, the country Ikenna is born in and calls home, the fairer skinned majority look upon those with brown complexions as inferior and as individuals who don’t deserve basic rights. As a result, Ikenna is continuously othered. The bigotry she encounters is heightened in Ikenna’s case because her Grandfather’s war prestige places her among Mareen’s aristocratic military caste, many of whom begrudge both Ikenna and her grandfather for daring to rise above “their places” and demand equal opportunity, equal access to wealth, equal access to education, and equal rights to be a member of society at the same level as the majority. Mareen is a highly patriarchal society too, which means Ikenna must grapple with excessive misogyny and sexism alongside racism.

As a Woman of Color, and a Black woman, I’ve faced this manner of challenges in the educational sphere, the work force, all aspects of life. Moreover, Women of Color and Black women often have to work twice as hard to gain half the recognition and accolades that cishet, white males are often more readily afforded. This is a reality I’ve grappled with since the earliest of years as a Black child who attended predominantly white primary and secondary schools and then a predominantly white university. Being an adult in the American workforce has yielded the same experiences: too often People of Color and Women of Color aren’t afforded the respect, recognition, equal opportunities for advancement, or equal wages that their cishet white male counterparts are extended. 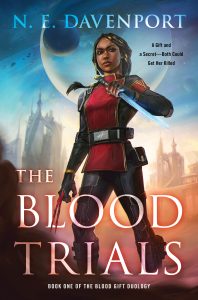 There’s a particular conversation that I often have with friends where we discuss our Black parents’ choices, or strongly expressed preference, for our own learning institutions growing up and the desires we have for the learning environments we will entrust our children to. They’re discussions we shouldn’t need to have in the first place, considerations we shouldn’t have to make. But the truth of growing up in a society where prejudice and Anti-Blackness remains rampant makes such discussions necessary. Do we insulate our kids and elect for them learning institutions where the majority of the student body looks like them? By doing so, do we try to protect them from profiling, hatred, and stereotyping based on nothing except their skin color for as long as we can? And if we elect the course, is that truly beneficial to them? Does shielding them in adolescence leave them ill equipped to handle the inevitable and eventual micro and macro aggressions that will come? Of course, the alternative course when this discussion is had among myself and friends is to plunge our kids into an environment that reflects many of the settings they will encounter later on in life: settings where they are the minority and those micro and macro aggressions abound. So, they learn early to cope and we can hopefully help them cultivate a high sense of self-esteem and self-worth despite society around them repeatedly telling them, treating them, and reinforcing prejudices via internalized, covert, and overt racism.

My own parents chose the latter option for me as a child and teen. They stressed its importance again when it was time to select a college. To place my parents’ preferences for my learning institutions into perspective, Ruby Bridges, the first African-American child to integrate at an all-white school occurred in my grandmother’s lifetime, while she was a young student herself. She then shifted from a segregated to integrated school some years later. My mother was a student who began her schooling career at an integrated school, while growing up in a disenfranchised Black community and dealing with self-damaging Anti-Blackness from outside her community and colorism from within. Both come from a sect of individuals of past generations who were staunch proponents for integration and wholeheartedly thought that separate models were and would always be inherently unequal because of the institutional prejudices and disparate access to resources that afflict Black American students and educators.

However, the “better” opportunities my mother and grandmother sought to provide me in an “integrated” school were not “better” in a myriad of ways. Many Black children in schools, even today, still exist in spaces where they remain both separate and unequal–though not necessarily in the historical sense of the terms. Yes, schools are integrated. Yes, multitudes of Black children attend schools and have access to spaces past generations never did. But I, as well as many friends with similar experiences, have never wholly felt like we belonged and were accepted in totality in these “integrated” spaces. Because racism, internalized, overt, covert, and every portion of the bandwidth in between is harbored by those within the faculty and student populations. In ninth grade I took a health class with a white male teacher. The first image that greeted me when I walked into the classroom for the first time that new year was a confederate flag displayed proudly on the wall behind my assigned seat. This is only one of many instances where the institution around me, where society around me, screamed at me I didn’t belong and I’d never belong.

As Black individuals of the diaspora, no two of us are the same. As a people, we are not a monolith. So I am only speaking to my lived experience with this shared story of my youth. But it was one that keenly took root in me then and something that I keenly work through and explore in The Blood Trials. The Science Fantasy novel is without a doubt a story about searching for belonging, questioning what belonging looks like, and dissecting where one wants to belong, why one wants to belong there, and if the fight is worth it. That is deeply and achingly how I feel about America. The analysis I have applied and have to keep applying to my conflicted feelings about living in America. Like Mareen is the country of Ikenna’s birth and the only home she’s ever known that contains her friends, her family roots, and a huge portion of her history and identity, the United States is that for me. No, it isn’t easy to exist as a Black woman here. In all honesty, it is a lot of the time hell to do so. However, my family lives here. My treasured friends live here. My roots are here. There’s pain here, yet joy.

Identity, culture, and self-perception are also major themes The Blood Trials explores. Ikenna begins her journey having a high sense of esteem and self–almost to the degree of flaws. But that doesn’t leave her without enormous insecurities and feelings of a void either. As I had to, and thankfully did, Ikenna must face the isolation of navigating educational institutions and larger society as a minority in a sea of whiteness that reinforces Anti-Blackness and still find her sense of identity, culture, and retain a strong sense of positive self-perception.

At the end of the day, I suppose, one more principal thing that The Blood Trials reflects about reality, is that Black and Brown individuals shouldn’t have limitations. We should get to be anything we want, exist where we want, claim joy where we want, find belonging and home where we want. 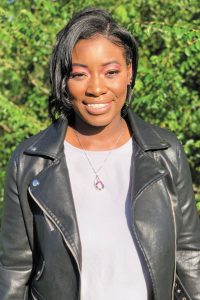 N.E. Davenport is the Science Fiction/Fantasy author of The Blood Trials and its sequel. She attended the University of Southern California and studied biological sciences and theatre arts. She also has an M.A. in Secondary Education. She teaches English and Biology to amazing students. When she isn’t writing, she enjoys vacationing with her family, skiing, and being a huge foodie. She’s an advocate for diverse perspectives and protagonists in literature. You can find her on Twitter @nia_davenport, or on Instagram @nia.davenport, where she talks about bingeworthy TV, killer movies, and great books. She lives in Texas with her husband and kids.