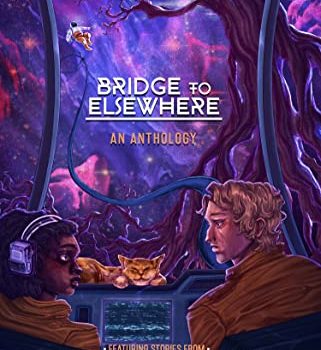 Chambers, James, Gyzander, Carol, eds.: Even in the Grave

Science fantasy novel. A god gives magic powers to an aristocrat’s son, who is a courtesan and brothel owner, making him an unexpected political player in his corrupt city.

Fantasy novel. Boxes appear outside people’s doors with strings inside, the length of which shows how long the recipient will live.

Freeman, Dan: The Minister of Chance

SF novel. A barmaid on another world follows a stranger crossing the Frost Bridge between worlds.

Fantasy mystery novel, the third in the Fairy Garden series featuring Courtney Kelly, who has a real fairy in her fairy garden store. A local socialite hires Courtney to cater a party, but a famous actress on the guest list is mysteriously murdered before the party begins.

Young-adult horror novel about a teen working at a haunted house where a cast member turns up dead.

Surreal/fantasy novel about a misanthropic French translator who stops working on a thriller to take a more prestigious book, only to have the first project fight back.

Mana, Davide: Descent: Legends of the Dark: The Raiders of Bloodwood

Tie-in fantasy novel set in the world of Descent: Legends of the Dark. The invasion of Terrinoth has begun. A misfit band must work together to learn the secrets of the Bloodwood, and repel the Beastmaster.

Young-adult fantasy novel, the first in a duology. Set in a city trapped in the eye of a cursed storm, the daughter of failed revolutionaries seeks to save her father from the executioners who have already killed her mother.

Novel about a famous stage magician who disappears, but her sister and fans can’t let her go as the 10th anniversary of her disappearance nears.

SF time-travel novel, the second in the Time Crime series. Mr. Z, a scholar of mythology, and his alluring protégé Vixy Velure have a second career as Time Detectives.

Young-adult fantasy romance novel about teens from rival families of stage magicians who enter a competition and fall in love.

Futuristic fantasy novel, second in the Dreambird Chronicles about Ji-Ji, a biracial slave seeking her freedom in a war-fractured former America.

Omnibus of three novels and one novella of first contact: Those Who Watch (Signet 1967), The Man in the Maze (Avon 1969), Tom O’Bedlam (Fine 1985), and “The Way to Spook City” (Playboy 1992; Voyager 2000 as part of The Collected Stories of Robert Silverberg #6). Silverberg provides new introductions to each, plus a general introduction.

Psychological horror novel with hints of the supernatural and some dark humor. Art tries to write a memoir of his past and the funeral-attending club he started back in his small-town high school in the ’80s — but the corpse-obsessed girl he met through the club takes violent exception to his account.

Space opera SF novel, first in a new series. Gregory Roarke has retired from bounty hunting and now seeks out new planets for possible development, until he’s offered a mysterious job with an unlimited budget, and a chance for some long-delayed payback.

If you like to get this info in BookTube form, we’ve got you covered! Help the magazine out by liking and subscribing to our YouTube channel! It helps more than you know.

Note: Special thanks to Steve Redwood for his assistance with the translation of this piece. Between 1985 and 1994 I wrote, more or less, a novel a year. All of them, except Cat’s Whirld and Jormungand, have been lost. Although not completely; somewhere there are typed copies of a few of them, or parts of them; and many of the themes, situations, and incidents of the majority of those novels have