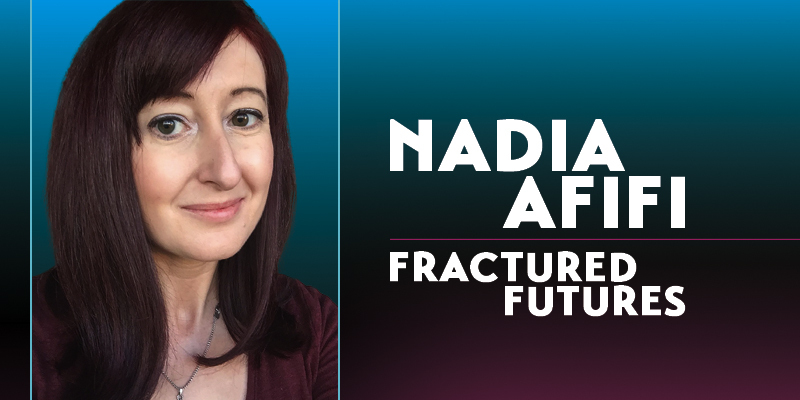 Nadia Afifi was born May 13, 1984 in the US, but grew up in Saudi Arabia and Bahrain before returning to the States for college, where she studied journal­ism and business. She now works as a program manage­ment officer for the Department of Veterans’ Affairs.

After publishing a couple of stories in ‘zines, she began producing work of genre interest with “Exhibit K” (2019) in Abyss & Apex, and has since published stories “The Bahrain Underground Bazaar” (2020) in F&SF and “A Thousand Tiny Gods” (2021) in Clarkesworld.

Her debut SF novel The Sentient appeared in 2020, with sequel The Emergent published in May 2022. A final volume in the trilogy is forthcoming.

“I’ve always been a big reader, and I wanted to be a writer early in child­hood. I discovered I liked telling sto­ries. I liked taking long walks by myself, even just pacing around my room in a circle and creating my own characters and creating my own stories. My family used to say, ‘What are you doing? Why are you walking and hum­ming to yourself around the house?’ That was my early storytelling.

“People ask me where I’m from, and the answer is always long-winded and compli­cated – but: I’ve got an American mom and a Palestinian dad who is a Saudi national. I was born here in the States, but when we were young we moved back to the Middle East and I lived in Saudi Arabia and Bahrain, which was definitely a unique experience growing up: being part ex-pat, part local, and coming back to visit family a lot in the States. It was a mixed-culture upbringing.

“I moved back to the States for college and got a journalism degree because I figured, ‘Well, I’m a good writer, therefore I’ll be a good journalist.’ Surprise, surprise, there’s a little more to being a journalist than knowing how to put a sentence together and write pretty descriptions, so I discovered it wasn’t for me. I got into working for the government after I got my graduate degree, and the writing thing fell by the wayside during those years. I wanted to write, but I never found the time to actually make it happen, beyond writing the occasional short story. Life shifted when I took a different job and moved to Denver CO. I got out of a rut, into a new experience and a new start on life. I said, ‘I am going to write that SF novel that I have always wanted to write.’ I’ve been a science fic­tion fan for a long time. It wasn’t the only thing I enjoyed – I was a big literary geek when I was in high school, and I read a lot of classics, Tolstoy and Dostoyevsky. But I’ve always enjoyed SF, and I realized that’s the true thing I wanted to dig my teeth into and write.

“I started working on a novel in the evenings, and that ended up being The Sentient, my debut. I started off as a rookie not really knowing what I was doing. I just got into writing, and along the way, I got smarter about it. I went to writers’ workshops, I went to conferences, and I learned all the craft that I didn’t know. Like a lot of writers, my first draft was complete garbage, and then I worked and cut away and edited until it became not garbage. I went through the usual process of finding an agent and getting rejected a million times, and then finding the right agent, Naomi Davis – they work for Bookends Literary Agency. Then I got rejected for a book deal, and then finally got one. That’s my origin story.

“For The Sentient I started off with almost a contrarian mindset. I wanted to tell a cloning story that wasn’t the typical cloning narrative. As a SF consumer, it’s always been a pet peeve of mine that cloning is always framed as this dangerous and deviant thing. You watch a movie, and some grizzled scientists says, ‘This is what happens when you try to play god!’ Cloning is always framed as a disaster, and I wanted to write a story where cloning was part of the plot, but it’s not some inherently wrong thing. The conflict stems from religious and cultural anxieties about cloning, and a perception that clones are not fully fledged people or are a lesser type of person. The story’s conflict comes from outside forces trying to prevent cloning from happening.

“There was definitely a lot of world­building that went on behind the scenes. I started off with that contrarian idea, and then, as I got into it, I had to figure out what else I wanted to do with it. What are my themes? What story do I want to tell? All of this worldbuilding came out of that process as I was writing, and as I was stewing over the ideas in my head when I wasn’t writing.

“My story centers on the main character Amira Valdez. She grew up in a futuristic religious fundamentalist cult in the South­ west. It’s a very fractured future, and very fractured society. I started writing it around 2012 or 2013 when I started noticing how polarized our politics had become in society at large. Even in my own family, you have the liberal camp and the conservative camp, and it felt like everyone was forming an identity around one of those two things. I started thinking about a future where society began to progress in a certain way, but you’ve got a minority, a subset of the population that feels left behind and can’t really adapt. As that group becomes smaller and loses its in­stitutional power and influence, those people become more frightened and more extreme.

“The world of The Sentient is set in the af­termath of that situation. The extreme funda­mentalists had a big conflict, and there have been world wars and environmental issues and a period of turmoil. My book takes place after that, when the majority of people live in modern cities, with all of the cool technology and futuristic trains and synthetic plants and environmental consciousness…. You’ve also got these walled-off religious compounds in certain parts of the world that are living in a different time.

“This story is set far in the future, so religion has evolved in its own way, but the funda­mentalists are shut off and living in a very antiquated way. The outside world doesn’t really want to deal with them, because they don’t want to be forced into a confrontation. My main character escaped from one of those compounds, hopped over the walls – liter­ally – and got onto a train and sped off to the big city. She became – through her own hard work, and also a lot of luck – a very talented neuroscientist who specializes in the read­ing of memories. She can get into a person’s layers of consciousness and pull out their memories, project them onto a holographic platform, and help her patients work through them. There’s a personal connection to that work for her, because she’s running from her own past, and doesn’t want to be defined by her background and traumatic memories. She starts off the novel very intent on show­ing that she is not the sum of her past and her original identity. She ends up getting assigned to a controversial cloning project that is being run by a scientific corporation. My futuristic world has a city within a city – I almost see it as a Vatican City of science, where you’ve got all these scientific corpora­tions that have a lot of autonomy and power. They do some good, and they do some bad, and a lot of it is for profit.

“This cloning project has not gone well because they’ve essentially been exploiting women like Amira from the compounds – for both scientific and social reasons; they’re able to use their power over them – to attempt to clone the first human being. They’ve failed to successfully clone a person, and these compound women have all been dying in their third trimester under mysterious circum­stances. Amira is brought in, partly for optics, but also in the hope that she can resolve the problem if it ends up being a psychological one. Of course, as she gets assigned to this, she develops a relationship with the last sur­viving subject of the experiment, who’s from one of the more powerful and dangerous compounds. Amira gets embroiled in a more elaborate conspiracy to subvert the project and to prevent the cloning from succeeding. There’s a lot going on. 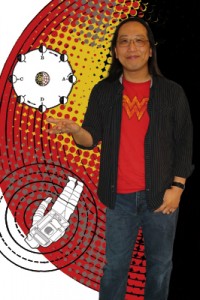 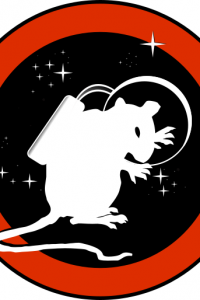