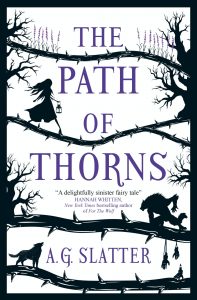 Over the last decade, beginning with the collec­tion Sourdough and Other Stories, A.G. Slatter has steadily built a lush and deeply imagined sec­ondary world inspired by European fairy tales, myths, and legends. Last year she published the first novel set in this universe, the fabulous gothic fantasy, All The Murmuring Bones (one of my favourite books of 2021), and has now followed it up with a second novel: the delicious and dark The Path of Thorns. You don’t need to have read All The Murmuring Bones or the short fiction to enjoy this latest instalment, but you really, really should. The Sourdough universe – which includes the collections The Bitterwood Bible and Other Recountings, The Tallow Wife and Other Tales, and the novella Of Sorrow and Such – is a remarkable achievement, one that marks Slatter out as one of the best contemporary fantasists in the field, along with C.S.E Cooney and Frances Hardinge.

Like All The Murmuring Bones, The Path of Thorns is a gothic fantasy. But where the former book’s protagonist, Miren O’Malley, has the character traits of the traditional gothic heroine, in as much as she’s unaware of the dark secrets that bind her family, Asher Todd enters The Path of Thorns cloaked (literally) in mystery, concealing both her true identity, with the help of an enchanted ring, and her motivation for assuming the role of governess for the three Morwood children. It’s the novel’s setting, the corridors, bedrooms, parlours, and inhabitants of Morwood Grange, that drip with gothic intent. No one in the house, including the staff and the Morwood family, is willing to discuss why the previous governess departed so abruptly or why she’s not returned to her family. Neither will anyone say an ill word about Luther Morwood, the nominal head of the household, now that his mother Leonora never leaves her bedroom, blinded by cataracts. He is distant toward his children, cruel and unfaithful to his wife, Jessamine, and continues to have a taste for young women, despite this being the very reason he was expelled from Whitebarrow University. There’s also a shape-changing wolf patrolling the perimeter of the property and a rage-filled ghost haunting the hallways of the Grange, an apparition that seems hellbent on harming Jes­samine Morwood, and whom Asher Todd finds very familiar.

Underlining all of Slatter’s work is her love for story-telling: both the mechanics of it and its broader cultural purpose. She excels at pac­ing, a rare gift, given the amount of bloated fiction published each year. It’s not that Slatter pares back her prose – one of the highlights of her work is an appreciation for the rhythm and poetry of language – it’s that she cuts out needless repetition and exposition, treating her audience as adults, not goldfish. And as she ex­pertly demonstrates with The Path of Thorns, she knows when to reveal key plot information and when to hold back. It’s a balancing act that many a writer falls afoul of, but which Slatter pulls off with Olympic-level ease. Technique is only part of what makes Slatter such a fine writer. Since the publication of the first Sourdough col­lection more than a decade ago, there’s been an implicit understanding that this is a secondary world woven together entirely of stories, fables, and fairytales. Slatter has reinforced the idea in both All The Murmuring Bones and The Path of Thorns, where some of the most important moments involve the sharing of a story between characters (typically abridged versions of the tales published in Slatter’s collections). It’s a meta-narrative that astutely demonstrates the vital role narrative plays in the cultural tapestries that inform our worldview.

While men generally play a peripheral role in the Sourdough universe, the full effect of the patriarchy can still be felt. Asher Todd is an excellent case in point. On the surface, she exhibits all the traits of an empowered woman: she’s whip-smart, a dab hand with herbs and natural medicine, and has more than a passing knowledge of the darker arts. However, as the plot unfolds, we discover that Asher was forced to autodidact her way to knowledge, taking on the job as a cleaner at Whitebarrow University – a place she is forbidden to attend as a student – where she learned to ‘‘slip in and out of places’’ she wasn’t meant to be.

All those clever men wrote such clever notes, all their lectures and all the results of their treatments and experiments. I read each and every one until I knew more than any spotty student who roamed the corridors, who’d bought his way into the institution.

It’s only much later in the novel that Asher’s talents are formally recognised by Leonora Morwood who hands over her son’s surgery to the younger woman because the village ‘‘needs a doctor or at least someone who knows what they’re doing.’’ Asher’s response is overwhelmed with conflicting, intense emotions: ‘‘I don’t know if it’s rage or grief or gratitude, or perhaps all three.’’ It’s a poignant moment that echoes across the novel as we come to appreciate that these emotions of rage, grief, and gratitude (especially the first two) are shared by many of the women in The Path of Thorns.

The great news is that Slatter has signed another two-book deal with Titan. Whether these are novels set in the Sourdough Universe or a new instalment in the Verity Fassbiner series, I’m not fussed. I’ll read anything she writes. 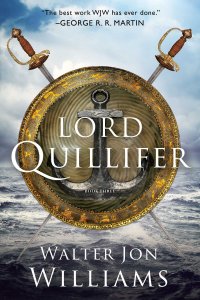 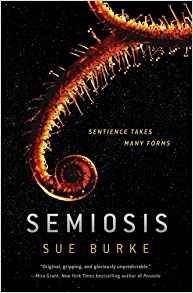