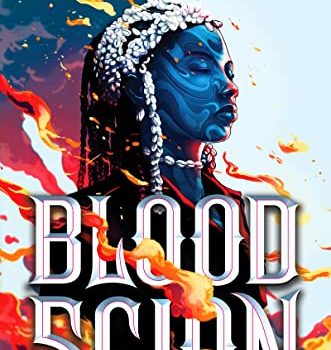 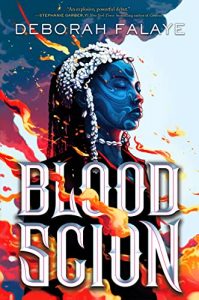 Deborah Falaye’s Blood Scion is an intense and sometimes brutal immersion into the horrors of colonialism, war, and oppression that is undeni­ably one of the season’s most powerful reads. Take this warning to heart: There is a lot of violence depicted and discussed in this novel, including rape, beating, and the horrors inflicted upon conscripted child soldiers. It is impossible to tackle the kind of subjects that Falaye addresses any other way, however, and that she is able to write about all of this while crafting an appealing protagonist and fascinating world is a testament to the debut author’s abilities. For many reasons, Blood Scion will stay with readers long after they turn the last page, and certainly Falaye will become an author that many will choose to follow.

Steeped in the Yoruba-Nigerian traditions of the author’s homeland, Blood Scion opens with 15-year old Sloane determined to uncover what happened to her mother. Desperate to find her body, Sloane places herself in a perilous position outside her village after curfew and is swiftly victimized by a murderous Nightwalker. The soldiers of the occupying Lucis army, the Nightwalkers care only about pain and power, and if she was any other teenager, Sloane would not survive the encounter. She has been keeping a secret and hiding a power that marks her as a Scion, a descendant of the Orisha Shango, and ‘‘a living inferno.’’ Sloane kills to save herself and in that rush, on only page nine of the novel, the plot sets off at a relentless pace that continues until the very last words. (Have no fear – there is a sequel planned for 2023!)

After Sloane is later conscripted into the Lucis army, where she will be forced to fight against her own people, she begins a covert operation to battle the Lucis from the inside and find a way to help defeat the colonizers. At the same time she seeks to learn what she can from the Lucis archives about the war and her mother. That she has to do all this while surviving savage military training is part of what makes the novel such a compulsive read. There are so many things happening, and so many unexpected twists and turns, that it’s impossible to look away. I can’t stress enough how wild the plot shocks are in this book (especially in the final pages). But at its heart, this is Sloane’s story, and she is the one who carries the action through every moment.

For all that Blood Scion addresses some very heavy subjects, however, Falaye also goes out of her way to have Sloane cultivate and maintain friendships both at home and as a conscript. The author also infuses the book with gorgeous physical descriptions, and her use of Yoruba traditions and symbolism gives the narrative added emotional heft. Readers looking for an unflinching view of war and a protagonist who more than lives up to the stunning cover illustration will love Blood Scion.