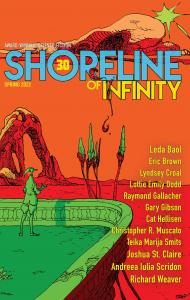 Starting out with March’s Shoreline of Infin­ity, the publication has launched a new serial by Eric Brown, ‘‘Approaching Human’’. The first two chapters of the project introduce Xorn, an AI PI (artificial intelligence who is a private investigator) who uses his skills in and out of a vast virtual reality network to satisfy the needs of his clients. There’s a noir tone and voice to Xorn, and with some tight plotting and sense of mystery, I’m very interested to see where the serial will go. Christopher R. Muscato crafts a story around overcoming inertia and inaction in his post-disaster ‘‘The Tides Rolled In’’. Here Afton, a young woman who has noticed a way to make a part of her world run a bit smoother, struggles with doubt and the weight of the past as she prepares to give an important presentation. Where Afton moves through a world actively healing from its trials, though, the narrator of Raymond W Gallacher’s ‘‘The Keep’’ waits for trouble in a world that’s just fallen, with roving scavengers still spreading violence in the face of scarcity. But here, too, there is a hope despite the harshness, that people helping people can begin to rebuild even after catastrophic loss.

Strange Horizons bridged March and April with a plentiful supply of poetry and prose, includ­ing Devin Miller’s ‘‘What Anger Breaks and Builds’’. The story follows Suuana, a woman who has had to wait for a storm to perform a ritual to try and retrieve her lost love, Yiltaia, from beneath the earth. Miller fills the prose with yearning and vulnerability, a desperate hope nestled into a defiant resolve. Suuana doesn’t give up, doesn’t accept tragedy written by hate, and finds family and hope in the magic of the love people share. ‘‘The Elysian Job’’ by Margaret Ronald recasts the tale of Orpheus and Eurydice with a pair of Bonnie-and-Clyde-style thieves who aren’t going to let the strange setup of the afterlife get in the way of a good time – or a good score. The piece is brash and bold, and Roland does a great job mixing elements to create something new and unexpected. Samantha Murray steers away from fantasy and into first contact science fiction in ‘‘Coming Through in Waves’’. In it, a narrator faces both a mother with dementia and a group of aliens hoping to settle on Earth whose story about how they got there doesn’t quite add up. There’s an ache at the core of the piece, where the narra­tor recognizes something in the aliens that she’s seen in her mother, and Murray weaves a powerful message in the parallels between the two.

Escape Pod closed out March’s originals with Shari Paul’s ‘‘Wild Meat’’, a wickedly fun piece about a competition for who can cook the best wild meat, a competition that quickly devolves into a misadventure surrounding the narrator as her husband and his friends kinda sorta kidnap a pterodactyl from a nearby dinosaur reserve to fill their menu. The lizard themself, however, has other ideas, and Paul captures it all through the wry observational humor and no-nonsense resolve of the narrator. Phoenix Alexander then helps to flesh out the publication’s April originals with ‘‘Mouthfeel’’. The story unfolds from the points of view of a series of narrators that are most often taken for granted – toothbrushes. The piece fol­lows as they evolve, from the familiar brush, to drone, to nanites, and even beyond. They act as silent witness to the waste and violations of hu­manity, but also our intimacies and loves. Through their relationship to humans and their mouths, they develop a kind of awareness and philosophy that makes for a beautiful and hopeful statement about time and progress. 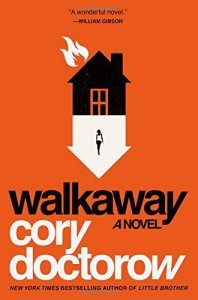 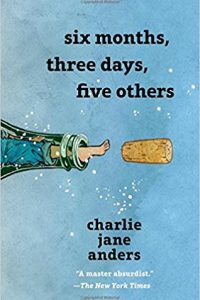