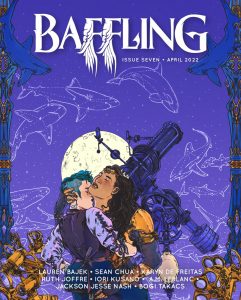 Baffling released a new issue in April, with seven flash-length works of queer speculative fiction. Ruth Joffre’s “A Girl Predicts the Future” kicked things off by offering Xochitl a choice, a menu of sorts for seeing into the future. The mercenary nature of the offerings is an interest­ing complication, something that prevents the aid offered from seeming wholly selfless, but perhaps also acknowledging that help tends to be passed around in queer communities, no one able to fully afford to do work for free, but everyone also of­fering their best rates for what can be transforma­tional service. Meanwhile Bogi Takács examines a set of fictional works of art in eir “Four Glass Cubes (Item Description)”. The piece looks at how these mysterious cubes (which aren’t always cubes) might not even have been intended as art, and yet they’ve come to inspire many in defiance and resistance to an oppressive government. It’s subtle but powerful work that reveals a setting through the clues left in these descriptions, and it makes for a fascinating and rewarding read. “Ocean Christening” by Karyn De Freitas finds a narrator performing a ritual in a place of strange and perhaps dangerous power, along a stretch of coast with a mysterious history. There they seek to celebrate and affirm the changes they are author­ing in their life – to take a name, and be truly and profoundly seen. And, in catching the attention of a resident magical being, they hope to be recognized as who they are without skepticism or resistance. It makes for a powerful and lovely scene. Sean Chua plays a bit with form and time in “Lake­boys”, which features a series of very short sec­tions, each about different boys who come to the same place. They arrive and stay only briefly, but the space offers a magic to them, an escape from the rest of the world, and a taste for what might be buried in their hearts. And Ann LeBlanc’s “Frequently Asked Questions About the Dead Woman Beneath Sang-D’Heloise” furthers that theme, embodying a sense of escape, affirmation, and magic in a corpse that grants miracles, but one that must be hidden for fear of being destroyed. It’s a story that more directly urges the reader to help build a world where that hiding isn’t necessary, where people can live openly and safely, accepted and loved for who they are. That is an important sentiment beautifully captured.

With the news that Fireside Magazine will be winding down came a change in its publication schedule. Rather than putting out monthly issues as has been the case for a long time, they’ll instead move to a quarterly schedule. The first on the new schedule came out in April, guest edited by Hal Y. Zhang. Shaoni C. White gets things moving with “Consigned to Moonlight”, a lively story framed as the posthumous trial of a woman who seems to have betrayed her country and peers. To the sister of Onorei Foxcroft, supposed traitor, though, the betrayal was when she went to work for the government, turning her back on the activ­ism and beliefs she had carried through her life. The final act is complicated by the forces at play, the corruption of the government in question, and the stubborn cunning of two sisters working to un­ravel a knot of magic, violence, and exploitation. “Clear Signal” by Julian Stuart is a yearning story about an asteroid prospector in love with the voice on the other end of the radio, Station, because xe’s not supposed to have a different name. For the narrator, though, Station is a lifeline in so many ways, which come to include literal after an accident threatens to doom the narrator to a lonely death. It’s a beautifully imagined and written piece.

Andrea Kriz shifts focus to AIs and two computer scientists trying to recover from a devastating Great Sentience in “AIs Who Make AIs Make the Best AIs!” It’s a complex work, where hu­man prejudice about intelligence and sentience is exposed when AI are tasked with making AI of their own. The piece deconstructs assumptions about what AI might look like, and what’s valu­able as AI. And the tone and title give the piece a triumphant feel, even as the setting remains grim and the characters have to face what success might mean. “XY” by Lucy Zhang tells the story of parents who didn’t exactly know how to raise children. Their first, one they built themselves, disappeared. And the second, the narrator of this story, they surgically and technologically altered to remove the “weaknesses” they perceived, and provide instead every advantage. But what that means for the narrator isn’t simple, even as she feels indebted to her parents, even after she finds what they’ve forgotten about in their basement. It’s a bit of a harrowing read, and yet presented in a matter-of-fact way that really shows the way the familial bond can be twisted and abused. Sister­hood comes back up again in Samara Auman’s “Certainty in Gold”, which finds two children who have always considered themselves sisters drawn away from Earth and to Mars. They’ve gone chasing their dreams, their passions, and yet the red planet doesn’t offer either the home they wanted. The story is bittersweet and emotion­ally resonant, with a gorgeous glimpse into the lives and loves and losses of these two orbiting almost-siblings, facing the prospect of stepping into the unknown alone. In the poetry of the is­sue, Jarred Thompson’s “What’s Left” is a particularly poignant take on place and beauty. It finds a house that is no longer a house, that has become something strange – a wound, a hole in the world through which the narrator of the poem can see something. Another world, or a glimpse of this one full of transience and transcendence.

The first April issue of Beneath Ceaseless Skies hits above its weight with two looks at characters who wanted desperately to stay in a place but, ultimately, could not. In “Eshat’s Temple” by Alvaro Zinos-Amaro, that place is a library where Eshat is a leader, the head librarian who can con­nect people to their ideal text. She’s also someone who has served others while always setting aside her own needs, something that made her famous, but didn’t allow for herself what she’s done for others. AnaMaria Curtis, meanwhile, imagines a magical city full of wonder and awe in “Ten Fruits and Other Memories of Rialynas”. The narrator recounts their time there, the passion and the joy, but also the corruption that doesn’t allow them to stay. For all of the city’s sweet complex­ity, it cannot sustain them. The second issue of April shifts thematic focus to two stories of young people faced with the evils of their families, and the choice to benefit from them or stand against them. “The Heart in Her Hands” by Robert Minto tells the story of Thomas, son of a traitor, cupbearer to his cousin the king as punishment for his father’s sins. But it’s not the king he cares about. It’s Eris, the daughter of an alchemist and, as she grows up, an alchemist herself, who moves from running experiments on the bodies of animals to the body politic of an entire nation. It’s a moving and tense piece, where Thomas is time and again forced to choose between the ambition of others and the truths of his own heart.