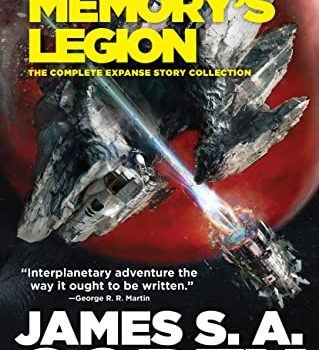 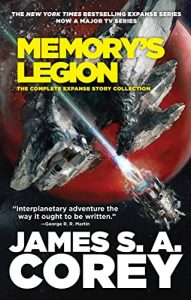 The long main storyline of James S.A. Corey’s Expanse series – nine volumes released over a decade – wrapped up with last year’s Leviathan Falls. At various points along the way, though, Corey (AKA Daniel Abraham & Ty Franke) produced shorter pieces that did not extend the main narrative but filled in some gaps before, between, and after its episodes. Now these stories, plus a new one, are collected in Memory’s Legion, along with Author’s Notes commenting on the genesis of the stories and their places in the series.

The stories are laid out in roughly chronological order. ‘‘Drive’’ is a pre-Expanse story of the invention of the Epstein Drive that opens the entire solar system to human settlement and the asteroid belt to industrial development, and also offers a glimpse of a Mars thoroughly settled but not yet politically independent. The last (previously unpublished) entry, ‘‘The Sins of Our Fathers’’, is a coda, set on a planet isolated by the collapse of the gates that enabled interstellar travel, throwing the settlers onto their own limited, local resources. Interestingly, both stories are about the benefits and costs of being an outlier in one’s social environment.

In between lie snapshots and back-stories. ‘‘The Butcher of Anderson Station’’ shows how Fred Johnson got that reputation and what set him on the path taken through the main body of the Expanse story line. Like several other entries, it recognizes the ruthlessness with which organizations grind up individuals for some notion of a greater good or a Cause. The most chilling and extreme example of such ruthlessness is ‘‘The Vital Abyss’’, seen from the viewpoint of a researcher for the monstrous Protogen corporation, whose brain has been rewired so he can proceed with protomolecule work that should have sickened him. The primary setting – a black-site panopticon prison – is an environment as hellish as any alien planet – and the backstory of the narrator’s progress from desperately ambitious scientist to conscienceless ‘‘moral zombie’’ is more unsettling than anything in the crime stories described below.

The authors admit their fondness for crime stories (obvious since the noirish Leviathan Wakes), and three of them make especially good use of that genre space. ‘‘Gods of Risk’’ shows the underbelly of Martian society, as Marine Sergeant Bobbie Draper’s nephew, well on his way to a respectable career, gets himself tangled up with adolescent hormones and some very dangerous characters. The Baltimore of ‘‘The Churn’’ is all underbelly, and the future of the young man at its center may be severely truncated when he is faced with conflicting loyalties and ugly jobs. (Another example of a ruthless organization, though in this case the Causes are greed and what it takes to survive in an urban jungle.) As the authors point out, there’s a ‘‘big reveal’’ in the story that will test a reader’s recall of the series’ details. But even without that challenge, it’s as gritty a picture of street life as any in these gritty books.

‘‘Auberon’’ shows ruthless organizations in conflict: what happens when the totalizing, pathologically disciplined Laconian Empire confronts an equally organized and much more flexible criminal enterprise that works with rather than against the unlovely side of human nature as-it-is, serving rather than suppressing our weakness and corruption. The new Laconian planetary governor is not a bad man – in fact, by Laconian standards he is a very good one. But the squirming world evades the unforgiving rigidity of the Laconian way. There’s a welcome strangeness in having a canny old crime boss be the spokesman for, if not a moral norm, at least a less pathological way of being authentic, even if flawed.

There’s this thing when you get older where you have to make a choice. Everyone does. You have to decide whether you care more about being your best self or your real one. If you’re more loyal to who you ought to be or who you really are. You know what I’m talking about?

‘‘Strange Dogs’’ is set at the beginning of the Laconian Empire’s absorption of all human-settled worlds, on Laconia itself. But it’s not a Laconian Empire origin story but that of young (and eventually perpetually young) Cara and Xan, who figure in Leviathan Falls, and also features the alien-technology ‘‘dogs’’ that have an important supporting role in Tiamat’s Wrath. It’s about transformation and a kind of transcendence, though those details ought to remain decently behind the Spoiler Curtain for those who have not read to the end of the main sequence.

The world of The Expanse is like Faulkner’s Yoknapatawpha County, Kenneth Roberts’s Kennebunkport, or even Ed McBain’s 87th Precinct. Characters pass through on their own trajectories, or might return with their own stories – it implies a world beyond the boundaries of a particular plotline. Corey’s final Note says that ‘‘The Sins of Our Fathers’’ is ‘‘the end. The last story in the cycle.’’ On the other hand, ‘‘the end isn’t really the end,’’ because

when you look at history, you see the same kind of people doing the same stupid, selfish, delusional, gorgeous, kind, astonishing things that we do today. And we’ll keep doing the same, as long as the species survives. Technical knowledge advances. The organism stays the same.

From the start, this has been a series that acknowledges the human and the humane, even while fighting space battles, chasing-and-escaping, confronting monsters (alien and otherwise), and blowing stuff up. No matter where we go, there we are. 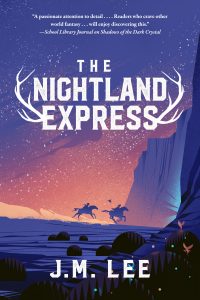