The Locus Bestsellers for March include top titles Moon Witch, Spider King by Marlon James (Riverhead), The Name of the Wind by Patrick Rothfuss (DAW), and Piranesi by Susanna Clarke (Bloomsbury US).

Dawnshard, the latest book in Brandon Sanderson’s series The Stormlight Archive, moved to the top of the hardcover list, followed closely by James S.A. Corey’s Memory’s Legion, a compilation of all the short stories in the Expanse universe. Our new runner-up was Echo by Thomas Olde Heuvelt (Tor Nightfire), a new standalone novel. We had 47 nominated titles, up from 46 last month.

Dune by Frank Herbert regained the top spot on the paperback list with a decisive victory over all other contenders. Brandon Sanderson’s Mistborn came in second. Wild Sign by Patricia Briggs (Ace), book six in her Alpha and Omega series, was our new runner-up. Sixty-four titles were nominated, up from last month’s 57.

On the trade paperback list, standalones nabbed the top two spots with TJ Klune’s The House in the Cerulean Sea moving back into first place, with a substantial lead over The Priory of the Orange Tree by Samantha Shannon in second. There were no new runners-up. There were 68 nominated titles, the same number as last month.

For media and gaming-related books, only Critical Role: Vox Machina: Kith & Kin by Marieke Nijkamp received enough votes to make the list. There were no new runners-up. We had 11 nominated titles, down from 22 last month.

See this listing and more like it in the June 2022 issue of Locus.

July 4, 2014 admin Comments Off on New and Notable Books, July 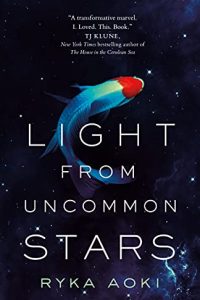 The inaugural FIYAHCON took place online October 17-18, 2020, held via Zoom and Dacast, and hosted by FIYAH magazine. Guests of honor were Yasser Bahjatt, Cassie Hart, and Rebecca Roanhorse. Accord­ing to convention director L.D. Lewis, the event was conceived mid-year, in the midst of protests, the COVID-19 pandemic, and the trend of conventions switching to virtual events; it was “for­mally launched” July 7, 2020, and the Ignyte awards were