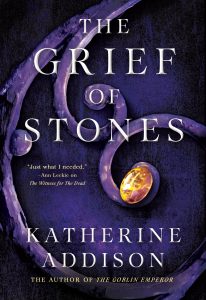 Katherine Addison’s The Grief of Stones is a novel I scarcely feel capable of reviewing as it deserves. Addison’s The Goblin Emperor is rightly considered a modern classic, a storytell­ing tour-de-force, and other books set in the same world were long-awaited. This anticipa­tion culminated last year, with The Witness for the Dead, a mystery novel and the opening volume of a projected trilogy (The Cemeteries of Amalo) starring Thana Celehar, a secondary figure in The Goblin Emperor and the titular Witness for the Dead. The Grief of Stones is a direct sequel to The Witness for the Dead, and it is every bit as intimately operatic.

Celehar is a prelate of Ulis, god of the dead, in the city of Amalo. He can speak to the recently dead, see the last thing they saw, experience the last thing they felt. His gifts mean it’s his duty to settle disputes – like over the contents of a will – and, sometimes, to solve murders. Celehar is a solemn, serious man, haunted in more ways than one. His talent for hearing the dead means he experiences some of the worst things that people do to each other, and he carries a great grief over the death of a past lover. Celehar’s someone whose moral centre is rock-solid, which sometimes means his sense of empathy conflicts with his sense of justice. He also undervalues his own worth by a significant degree.

The Grief of Stones is the second novel in The Cemeteries of Amalo trilogy. Celehar is asked to investigate the sudden death of a noblewoman, now three months dead, whose husband believes she was murdered. Celehar’s investigation leads him – somewhat surpris­ingly – to Amalo’s less reputable demimonde of pornographic photographers, and to a school for foundling girls, and along the way he comes across evidence for an arguably even cruel­ler crime than murder. That criminal wants Celehar to confront an ancient and murderous phantom – a phantom that has killed everyone who ever came within its reach.

What compels me about a mystery novel is almost never the mystery itself. A mystery on its own is merely a puzzle, and I’ve never fallen in love with a puzzle, however perfectly constructed. No, what I enjoy is the world in which the mystery takes place, and the char­acters who move through it. The social world, and the physical atmosphere, like those evoked by Sujata Massey in The Widows of Malabar Hill or by Barbara Hambly in her Benjamin January mysteries, or depicted with such adroit­ness by Dorothy L. Sayers in classics like Nine Tailors or Gaudy Night. There are omplex worlds, whose social dynamics inform both the mystery itself and its resolution, populated by characters who are unmistakably products of their worlds, and in the case of the investi­gators, astute observers of their worlds who straddle the line between belonging to their communities and being caught outside them. It is very seldom that a fantasy mystery novel manages to create this richness and depth and wholeness to their worlds, which means that it’s seldom I love a fantasy mystery (as opposed to a fantasy adventure), but Addison does it in The Cemeteries of Amalo with a seeming ef­fortlessness that can only be the product of a prodigious amount of skill and work. Amalo – and its extended world – feels real in everything from the corners of its cemeteries to its urban and religious politics, its rooming houses and eateries and (occasionally) cash-poor nobility, to its opera houses, prostitutes, and pornogra­phers. It’s rich in a way that extends beyond the page, an imagined city that feels as though it has as many layers as Oxford or New Orleans, London or Mumbai.

The Grief of Stones is, in a way, a novel about outsiders, about the overlooked and the looked-down-upon. And it’s a novel suffused with grief: almost all of the characters here, from Celehar himself and his new ‘‘apprentice’’ (Tomasaran, a widow-turned-Witness-for-the-Dead with no training in the prelacy) on down, are touched in some way by death, affected by it, carrying private griefs with them, and learn­ing to deal with them. Or hopefully to heal from them. The emotional arc of the trilogy so far appears to be Celehar moving towards healing, in some degree, from the worst effects of his oldest and deepest grief. (Perhaps one day he and the flamboyant opera-writer Pel-Thenhior will be more than good friends, but Celehar is not quite ready for that yet.)

It’s a novel I loved, and one I’ll be revisiting to linger over again. Addison has striking command of language, a precision of phrase that’s a delight to read and a pleasure to read again. If you enjoy atmospheric, thoughtful, well-characterised mys­teries with compelling characters and a compe­tent, kind, and modest protagonist, I recommend The Grief of Stones highly. Hell, even if you don’t think you like such things, try this one (or its predecessor). It’s a great book. 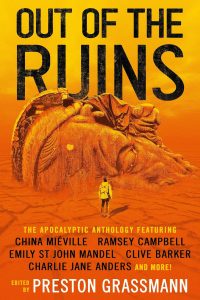 Rich Horton Reviews Short Fiction: Out of the Ruins, Asimov’s, and Analog