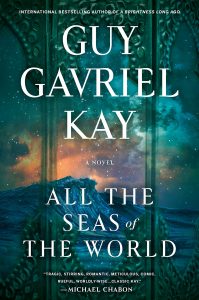 Based on absolutely no evidence other than a handful of conversations, I suspect that Guy Gavriel Kay’s large and loyal readership extends along a fairly definable spectrum. At one end are the pure fantasy readers, who value his torqued version of actual historical settings as a kind of worldbuilding all its own, even if fantasy or su­pernatural elements are at times minimal. At the other are the literary and historical-fiction readers, attracted by complex characters, intrigue-driven plots, and Kay’s acute sense of the sometimes ran­dom tectonics of history. Somewhere in between, I suspect, are the majority, including both devotees who have come to learn his invented nomenclature for nations, cities, geographical features, and re­ligions, and first-time readers who may find this at first puzzling–but who eventually appreciate that the dialectic between invented and tweaked history is one of the more enjoyable parts of the game. The latter may be one reason that All the Seas of the World is as much a stand-alone novel as 2019’s A Brightness Long Ago, even though it shares a setting (roughly the Mediterranean at the close of the Middle Ages) and features several of the same characters.

Not uncharacteristically for Kay, the novel begins with a rather small-scale intrigue and gradually expands its scope toward a wrenching conclusion, along the way filling in the backsto­ries and motivations of its central characters. A corsair named Rafel ben Natan has moored his ship near the city of Abeneven, where he and two companions – one a woman disguised as a boy–are to carry out an assigned assassination. While it doesn’t quite go as planned, Rafel and the woman Nadia (whose true name we soon learn) end up with a couple of substantial treasures that have the effect of making them independently wealthy for the rest of the novel, so much so that they can finance the construction of their own warship. It might seem counterintuitive for a novelist to begin by providing two of his main characters with a fat bank account that normally might be saved for a happy ending, but the effect is to insure that their decisions throughout will be based on something other than necessity or simple opportunism – and characters struggling to make decisions are at the heart of any Kay novel, especially when those decisions turn out to be unexpectedly consequential. ‘‘Lives change, turn, pivot on small things, accidents of timing,’’ we are reminded more than once. Both Rafel and Nadia are exiles, Rafel because of his Kindath religion and Nadia, an ex-slave who has taught herself an impressive array of survival skills, be­cause she killed her former master. After meeting with the two brothers who had commissioned the assassination – and who themselves turn out to be pretty sketchy–their tale entangles them with a substantial cast of well-realized characters, the most significant of whom is the much-feared mercenary army commander d’Acorsi, whom we met in A Brightness Long Ago but who gains a good deal in depth and complexity here, turning out to be a surprisingly thoughtful and humane leader for one with such a fearsome reputation. We also hear again from the court adviser Guida­nio Cerra, whose haunting and haunted voice lent such resonance to the earlier novel.

As usual, Kay deploys an impressive variety of such narrative voices, and the occasional shift into first-person has something of the effect of hearing a skilled soloist in a symphony (for some reason, I think of oboes or bassoons, but maybe that’s just me). As his isolated and exiled figures strive to find identities, communities, families (both of the main characters seek out their brothers in especially moving moments), they gradually earn the trust not only of each other, but of the reader. Nor does the tale lack in romance – including some gay and bisexual relationships, credibly handled with the caution that the historical period demands. While the novel’s supernatural appurte­nances are characteristically restrained – mostly taking the form of a mysterious voice that Nadia hears at crucial moments and a mystical white stag who briefly shows up – Nadia herself (who stops being called Nadia by Chapter Five, as if to underline her quest for identity) is one of the most deeply realized characters Kay has yet cre­ated. While the central story is largely hers, even the secondary figures gain a haunting presence, especially when we are offered brief glimpses into their future lives. While the catalog of these char­acters offered at the beginning of the novel at first might seem intimidating (at least to me, but then I was terrified by the character list at the begin­ning of War and Peace), the on-the-ground tale is a model of clarity and focus, and All the Seas of the World is as rich a tapestry as we’ve come to expect from Kay – perhaps one of the richest. 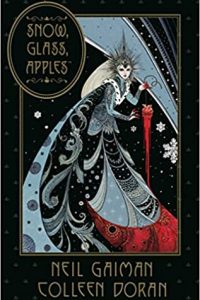 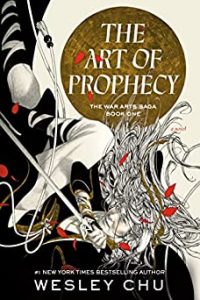 Adrienne Martini Reviews The Art of Prophecy by Wesley Chu