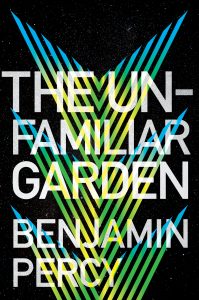 Benjamin Percy can apparently do it all. From novels to comics to television, Percy seems to be everywhere, but as a reader, I selfishly wish he would just sit at his desk (or wherever he writes) and crank out a novel every three months or so. Yes, The Unfamiliar Garden is that good; a perfect blend of crime fiction with a serial killer at its core, a story about a broken couple haunted by the loss of their daughter, and a wild science fiction tale about a fungus that could take over the world.

When the sky fell, the world changed forever. An unprecedented meteor shower altered the way people lived, and in the aftermath – one marked by strange events everywhere and an altered climate – Jack and Nora Abernathy suffered an even greater change: the devastating loss of their young daughter Mia, who vanished in the woods while out with her scientist father. The disap­pearance was the final blow to Jack and Nora’s already fragile marriage. They had always been different, and Mia helped them to make it work, but in her absence, little differences ballooned into annoying, unforgivable offenses. For Nora, a homicide detective, not being able to solve her own daughter’s disappearance was devastating. For Jack, depression and guilt affected his work as a biology professor and made him stop caring about his performance. After the divorce, they moved on with their lives and rarely talked to each other. However, their lives changed again five years later when it started raining again in Seattle. Fist, Jack discovered a new parasitic fungus and began to care about his academic ca­reer again. Meanwhile, Nora began investigating several ritualistic murders that appear to be tied to a serial killer that terrorized the area years ago. Unbeknownst to both of them, their research is going to put them in danger and bring them together; there is something happening with a new deadly fungus, and the government is in on it and not in a good way. The connection between their discover­ies will eventually lead to them fighting a possible pandemic, dig into the history of the serial killer and ponder the new murders, and bring them closer to the truth of their daughter’s vanishing.

There is a lot to like in The Unfamiliar Garden. However, the first element that deserves a moment in the spotlight is Percy’s talent for balancing inter­twining narratives. For more than half of the story, Jack’s and Nora’s individual storylines exist in the same world but inhabit very different spaces, so they are truly unique stories that follow two different paths – both equally entertaining – until they merge. And then there is a third story that more or less is responsible for bringing them together: that of the fungus itself, the scientist that becomes one with it, and the government whose interest in the fungus’s potential is, as always, nefarious.

The second element about this novel that merits attention is the seamless way in which Percy blends elements of crime fiction, horror, and science fic­tion. Nora’s investigation, the ritualistic murders, and the research done on the possible serial killer connection place this book comfortably within the mystery/thriller arena. However, that’s just one of three genres at play here. The meteor shower, the fungus, the scientist who becomes one with said fungus, and the way the fungus infects people and animals are all elements that belong in hard science fiction. This last thing, however, also bridges the gap between science fiction and horror. People die and morph into something that resembles a plant. People get sick and stuff comes out of their mouths as they cough and cough. Body horror permeates the novel. The same could be said of the carved symbols and drawings that people make with their own blood or that of their victims: sure, it’s a police procedural in a way, but it’s also horror fiction.

The amount of action, tension, gore, and unique ideas and events packed into The Unfamiliar Gar­den, which is a relatively short novel, is a testament to Percy’s storytelling skills. The dialogue here carries the action very well, the pacing is superb, and when things get strange, they get really strange: collective psychosis, unexplained murders, desperate people who don’t know if they need ‘‘an ambulance, the police, or a priest.’’ A woman beats herself against a table until her face is destroyed, a man can hear nature and feel every living creature and its conscience if they’re near enough… the list goes on and on, and with every new chapter, Percy delivers a new round of elements that enrich the narrative and contribute to keeping readers glued to the page.

The Unfamiliar Garden is the second novel in Percy’s Comet Cycle, which began with The Ninth Metal and ends in June of 2022 with The Sky Vault. However, reading the preceding novel is not a requirement to enjoy this one. The Unfamiliar Garden works perfectly well as a standalone novel, and it’s one that speaks volumes about Percy’s tal­ent for creating worlds and then twisting them into something that feels entirely fresh. At once a daz­zling science fiction story, a dark, gritty crime novel that dips its toes into horror, and a touching narrative about a broken couple learning to cope with a major loss while never giving up on their missing daughter, this is one of those rare novels that offers something for every kind of reader. 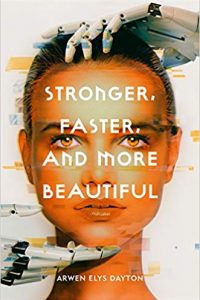