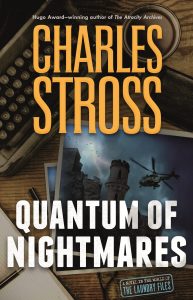 Charles Stross’s Quantum of Nightmares is the 11th of the Laundry Files books, a series whose trademark is the blending of tropes, motifs, and narrative conventions from the supernatural-horror and intrigue/crime/spy-thriller genre families. At the beginning, these struck me as light entertainment, part Lovecraftian-gothick, part secret-agent adven­ture, with a generous dollop of political-social satire, all delivered with an edgy and antic sense of humor. So it took me a while to recognize the genuinely nightmarish side of Stross’s work, a kidding-not-kidding sensibility driven by an entirely unfunny recognition of the awfulness that exists in the world outside the books.

This isn’t exactly a Laundry Files book, though, and not only because it lacks Laundry operative Bob Howard and his colleagues and his agency. Beginning with this volume’s im­mediate predecessor, Dead Lies Dreaming, the world of the Laundry has evolved: previously concealed supernatural forces have erupted into public life. Magic is abroad everywhere; super­powered cops, crooks, and civilians abound; an undead god leads the government of Great Britain; and his New Management regime has remade England in the image of the late 18th century, complete with public executions for minor offenses, heads on stakes, and vast and remorseless social-economic inequalities. (The crossover began in earnest with The Labyrinth Index, 2018.)

We are alerted to this situation on the first page, when Mary MacCandless, on her way to a gig as a fake nanny, ‘‘stopped to admire the glass and chrome skull rack on Tyburn…. Most of the niches were still empty, but several lonely heads stared eyelessly down from the top row.’’ Mary’s own criminal status is signaled when she deliberately gives a counterfeit bill to a street seller hawking tales of the ‘‘evil deeds an’ sad’n’pathetic last moments’’ of the executed (free DVD included). Shades of Tyburn hang­ing-day pamphlets and The Newgate Calendar. Mary is pretending to be a temp-agency nanny as part of a scheme to kidnap the four children of a transhuman (that is, superpowered) couple in the employ of the police. The snatch quickly descends into a cross-country ‘‘Ransom of Red Chief’’ debacle when the Banks children turn out to be budding transhumans themselves, with a range of trouble-making powers and a shaky sense of when and how to deploy them, especially in the temptation-rich environment of a toy store. Fortunately, Mary has more than a touch of the transhuman herself, which allows her to barely escape the series of messes her charges make at every stage of her getaway.

Once again the structural model is a varia­tion on the crime caper, and Mary’s is only the first of a set of plot threads that crisscross and finally converge into a single, tangled tale as relationships and schemes are revealed and connected. (I was reminded of a Carl Hiaasen comic thriller–specifically Razor Girl, which I recently read.) Elsewhere in the plot tangle: At a down-market branch of the FlavrsMart supermarket chain, Human Relations worker-bee Amy is dealing with a particularly nasty case of employee misconduct under the basilisk eye of her immediate boss, whose primary manage­ment skill runs to terrorizing her underlings. In the company headquarters (and supervillain lair) of the Bigge Organization, Eve Starkey, personal assistant and effective second in command to its (one prays) late billionaire-playboy-mage owner, is peeling back the layers of the corporate and extra-corporate organizations left behind after the exertions of Dead Lies Dreaming. Rupert Bigge, it turns out, was driven by a much uglier set of mo­tives than garden-variety greed, ego, and pursuit of kinky sex. She decides to call on her scapegrace, petty-criminal younger brother Imp and his little gang of transhuman Lost Kids as irregular troops in her investigations. Eventually, ex-cop turned private-sector thief-taker Wendy Deere, whose adventures in the earlier book helped send Rupert to his presumed doom, goes undercover at Amy’s FlavrsMart branch, where ‘‘product adulteration’’ in the processed-meat department has been found to include human DNA.

All this does eventually fit together with Bigge’s non-business activities (including his ownership of a medieval demesne, complete with castle, dun­geons, sacrificial chapel, and swarm of minions), the kidnapping of the Banks kids, and the conflu­ence of various business practices and vile New Management social-welfare policies.

It is with the last of these that the book leaves the realm of entertainment-grade supernatural horror and vomit-inducing splatterpunk. (Consider that last a trigger warning.) If supernatural-horror motifs are often metaphorical/psychological, this is where real, material evil and actual horrors present themselves in ways that seem less imaginary. It is also where the book’s motifs veer into the science-fictional: right next to the multi-dimensional Lovecraftian metaphysical scheme that supports demon worship and soul-eating brain parasites is a dystopian political-economic landscape. The means by which FlavrsMart is improving profit margins on processed meat products while simul­taneously reducing labor overhead and enforcing corporate discipline consists of literal machineries used to automate the living workforce and turn the vulnerable and economically useless into feed­stock–Sweeney Todd meets Soylent Green in the land of zombified meat puppets. One key to this is a new social-legal category:

De-emphasized was the current euphemism for thrown on the trash heap. It denoted people the New Management considered to be of no (or minimal) value to society. They had no money, they couldn’t hold down a job, and they didn’t even soak up resources in a useful way…. [by] generating economic activity and jobs for careers…. But the de-emphasized had the temerity to try to look after themselves in ways that resisted monetization.

These miserables are the source of the rogue DNA in the literal and symbolic meatgrinder that is the book’s central nightmare, and the anger that powers that vision is what elevates this (and much of recent Stross) above sideshow horrors. (To be fair, that anger also drives much of Stross’s funny side, which is increasingly and savagely Swiftian.). It’s not that the thriller side doesn’t thrill, but what sticks in the mind isn’t so much the carnage after the last zombie and necromancer and priest of the bloodthirsty godlet has been blasted by superior spell-fire. Instead, it’s the accountants and finance wizards and the heartless nastiness conjured up by the magick of their spreadsheets and cost-benefit analyses and PowerPoint slides that haunts my daytime unquiet dreams. 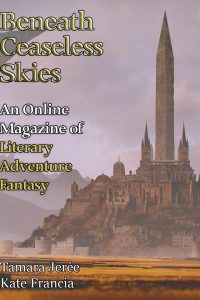 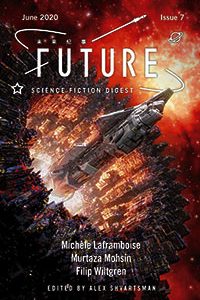