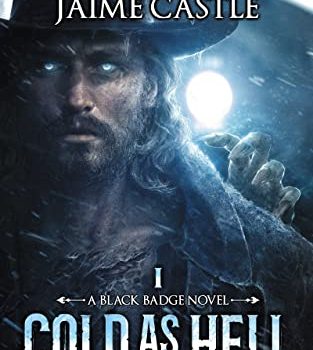 Western dark fantasy/horror novel, the first in the Black Badge series. Includes bonus prequel story. James Crowley died in a gunfight, and is now stuck in purgatory, doing penance by fighting evil in the service of the White Throne.

Darkly humorous near-future SF novel. A bighearted mercenary on a road trip gets a call from a biological daughter he didn’t know he had, and she needs help.

Collection of 17 satirical stories, seven reprints, many speculative, often offering dark/humorous takes on the near future. This takes the form of a guide to the Anthropocene, with alphabetical sections of definitions interspersed with the stories.

In 1991 researcher Betty T. Bennett discovered that David Lyndsay and Walter Sholto Douglas were names used by Scottish writer Mary Diana Dods (1790-1830). This volume collects three fantasy stories written as Dods and one as Lyndsay, with a foreword about Dods’s life from Natasha Tidd.

Supernatural thriller/romance novel, 36th in the Krewe of Hunters series. Colleen Law, who can hear the voices of victims in her head, joins a veteran FBI agent in investigating a series of women gone missing in Virginia.

Near-future SF novel, sequel to Glow. The nanotech drug has spread across the world, twisting everyone to its will. Rex remains in hiding, still recovering from his addiction, struggling with his supposed destiny.

SF thriller about a group including a quantum computer scientist, a virologist, a podcaster, a venture capitalist, and an assassin working to untangle an enigma that could change the future.

Collection of 50 short-short crime stories, one new, in a mix of genres including SF and fantasy. Three stories are in the Nameless Detective series; 14 are collaborations with Barry N. Malzberg, who also provides the afterword.

Young-adult horror novel. At an elite summer program,a teen girl gets sucked into a secret society, with deadly consequences.

Fantasy novella. In 1900, Louise Wilk tries to help her husband, who is wasting away from a strange malady that appears to be trying to transform and possess him.

Ryan, Lindy, Brooks, Christopher: Throw Me to the Wolves

Werewolf horror novel, first in the Cry Wolf series. Ten years ago a witch sacrificed Britta Orchid’s family and turned her into a werewolf. Now the witch’s remains have been discovered, and the investigating officer hopes that Britta will help with the investigation.

Dark supernatural thriller. A high-stakes competition has people trying to spend a week in an abandoned amusement park, but players start disappearing.

Speculative, psychological suspense novel about a nameless man who wakes without memories in an apocalyptic landscape.

May 30, 2013 admin Comments Off on New Books, Supplemental May