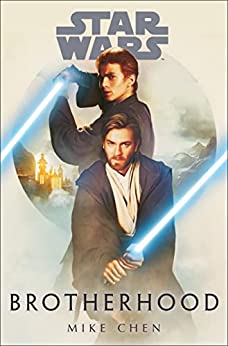 Star Wars tie-in novel, set just after the events of Star Wars: Attack of the Clones.

SF novel, second in The Neodymium Chronicles series. A young space veteran is already struggling with trauma when he discovers that his best friend has betrayed him.

Alternate history SF novel with aliens and an immortal misanthrope in a world where Kennedy wasn’t assassinated, Robert Oppenheim invented a nuclear engine in 1945, and aliens invaded in 1957 — and a killer with a mysterious box of 8-track tapes is making trouble for a regular guy named Brooklyn.

Dark fantasy novel about a dance club with “state of the art customizable reality, anything you see and hear and feel” — but a rooftop rave sets off a “fathomless energy.”

Postapocalyptic SF novel set in a world where the cure for the Great Fatigue reduced most of humanity to a primitive state, and two people make discoveries that suggest other survivors are a bigger threat than the primitives. Includes watercolor illustrations.

Lloyd, Stephen: Friend of the Devil

Fantasy novel, the first in a new series. Kagen Vale, once captain of the palace guard, loses his way when the royal family is killed, until he hears a rumor two of the children are still alive.

SF novel of conspiracy and intrigue on an orbital space station tethered to Earth by the space elevator called the Cord.

SF novel, revised and expanded from the 2018 self-published version. The Efilu people, who left Earth back in the time of dinosaurs, return to 1996 Earth.

Absurdist middle-grade fantasy novel. Illustrated by Aaron Renier. Mick agrees to be an apprentice to the strange little guru that that his older brother brought home from Tibet, and together they undertake a quirky and mystical quest.

By the time it’s over, Crazy in Poughkeepsie turns into a remarkably sweet-natured mystical fantasy about helping a beloved ghost whale find its way to whale heaven. But throughout, it remains a characteristic Pinkwater tale of unexpected turns, hilarious sidebars, and above all a celebration of the outsider – or at least of the quirks and obsessions that make us all outsiders at one time or another. And, as always, it’s wickedly funny.
–Gary K. Wolfe, Locus, March 2022

Horror novel. A nanny suspects her charge is in danger after he draws increasingly disturbing pictures. Includes illustrations by Will Staehle and Doogie Horner.

Supernatural suspense novel about near-death experiences. 14 years ago Claire and her brother were blasted off their feet by a blinding light, leaving them with strange effects.

Young-adult fantasy verse novel drawing on Jewish and Eastern European folktales. Biracial Jewish girl Ilana Lopez dreams of becoming a violinist, but while visiting an aunt in Prague and she meets ghosts and a shadowless man who offers to share his magic.

Fantasy novel of a Chinese American lesbian girl in a pre-Code Hollywood full of ancient magic.

Vo’s three competing studio moguls inevitably suggest figures like Thalberg, Mayer, and Selznick, the hermetic and haunted Hollywood of Siren Queen is very much Vo’s own territory – and a pretty creepy place it is.

Fantasy novel, the first book in the Dawning of Muirwood series. Lowly foundling Eilean, at the new abbey of Muirwood, serves the imprisoned druid Mordaunt, the king’s exiled advisor.

Middle-grade fantasy novel. Zachary, raised in Maine, knows very little about his Chinese heritage until the spirit of the first emperor of China gives him powers and sends him on a quest to the underworld.

Do you prefer to get your info via YouTube?

We have a channel and post a weekly roundup of New Books there. Subscribe now to our channel and help us keep doing these!

Back in 2005, I did something weird. I decided that I would embark on a project to write short stories with the same (or similar) titles to famous science fiction books and stories. My initial motivation for this was Ray Bradbury objecting to Michael Moore calling a movie Fahrenheit 9/11, which led Bradbury to call Moore an ‘‘asshole’’ and a ‘‘horrible human being’’ who’d ‘‘stolen’’ the title. Like many other