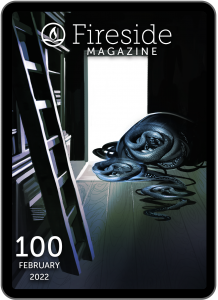 At Flash Fiction Online, February is often dedicated to stories about love, and new editor Emma Munro keeps that tradition going. A small note for full disclosure that this issue contains a reprint of my own story, “A Lumberjack’s Guide to Dryad Spotting” (the story also appears as a reprint in Xenocultivars, which I’m also review­ing in this column). Some of the loves, though, are a bit bittersweet, as in “Fried Rice” by Shih-Li Kow, where a cookbot tries to master a recipe for a man who has just lost his wife. For all loss and memory can seem to enshrine those passed as perfect and beyond reproach, though, the story is very much about imperfection, and the beauty and joy of it. It’s all wrapped up into a tight narrative that packs a powerful emotional punch. Beth Goder turns the focus from lost love to young love in “The Appliance Crisis”, a charming story about a teenage crush and a magic (if rather cantankerous) toaster. The voice of the piece captures the stress and energy of its teen protagonist well, and adds in a bit of inconvenient wonder into the mix, to great result. The issue also updates “The Lighthouse Keeper’s Guide to Pulau Belakang Mati” by Wen-yi Lee from the previous issue, which wasn’t released in its final form. It’s a grim read, but also a profound statement about conflict, penance, and memory. It revolves around a respect for and honoring of the dead, a recognition of what has been lost in order to make sure similar tragedies do not recur.

It’s the 100th issue of Fireside, and while there’s no extra content to mark the occasion, it’s still a reason to celebrate. And kicking things off is Premee Mohamed’s stunning “Seen Small Through Glass”, where the narrator finds themself the legal guardian of a child, Ash, after Ash’s parent, the narrator’s cousin, is arrested and jailed. Worried that they’ll screw up raising a kid, they just want to give Ash something positive – a day out birdwatching, his only real interest. With a viral fungus that seems to target children, though, it turns out the narrator’s worries aren’t all for nothing. The relationship between the narrator and Ash is well built, messy but with a solid foundation, as both characters want to be something to the other, even if they’re not sure what yet. “Oversharing” by RJ Theodore also looks at the world and its dangers, but looks at the price of facing the world alone, changing to try and suit it, or at least survive it. The story features a strong use of body horror as the narrator deals with the sharp, hungry jaws of the world trying to chew them up and spit them out. Hesper Leveret twists expectations in “Not a Basking Shark” as Dr. Saleema Malik, a marine biologist, comes face to face with a community of beings drawn from a diaspora of aquatic peoples. That should be a reason so celebrate, were it not for the fact that their appearance isn’t necessarily a boon to the humanity that has destroyed their homes. It’s an interesting and fresh take on mermaids, and one that leaves Saleema between multiple worlds, none of which are particularly safe for her. In Martin Cahill’s “The Book of the Black­smiths”, a short-lived people dedicated mostly to building things they don’t understand and train­ing their immediate successors find a beauty and power in pausing to focus on the individuals of their time. With only numbers for names, their lives seem designed to be interchangeable, but the narrator, a chronicler, decides to push back on that in an interesting and lasting way.

At Strange Horizons, following a special issue at the end of January focusing on speculative criti­cism, fiction returns in February with Shakirah Bourne’s “The Heartless Woman”. Aching and raw, the story finds a community split after a violent tragedy, and two neighbors in the middle of it, once close, now shattered. To cope, the narrator decides to carve out her own heart, to stop from feeling anything, but even that doesn’t bring peace. It’s a visceral story, devastating and poignant. “Intimacies” by Filip Hajdar Drnovšek Zorko unfolds from the point of view of Tevulian, a hippocampi (a kind of sea horse mermaid). The story opens as a kind of condem­nation of human attitudes toward intimacy and sex. Yet as Tevulian learns more about humanity, he finds that it’s his own misconceptions about human intimacy that are limited. It’s a sensual, beautiful story about connection and difference. On the poetry side, “The World is a Curio” by Nicky Russell evokes a sense of abandonment, a feeling of being outdated and strange. There’s a sense of disconnect but also magic, and the language is rich and inviting.