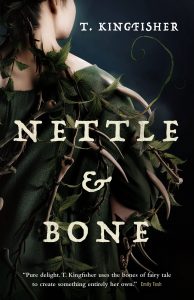 I am already a fan of T. Kingfisher (AKA Ursula Vernon). The three books (so far) in the Paladin series are full of light romance (with occasional corpses) and have kept me going through the last 18 months. Her young-adult stories like the Lodestar Award-winning The Wizard’s Guide to Defensive Baking are fun for adults as well as for their target market. She’s wandered into horror, too, with The Twisted Ones. And Digger, her graphic novel about a wombat, is as profound as it is charming. Given the breadth of her work so far, I figured I knew her style. And then I read Nettle & Bone, which is very much an Ursula Vernon book and also very much one where she has leveled up her skills.

It starts like a quest novel. Marra, a young princess of a small kingdom fighting for survival, is finishing her second task in a series of three. After weaving a cloak made from owlcloth and nettles, she’s currently building a dog out of bones. It isn’t going well, as you’d expect, given that she is on a quest and tasked with doing the impossible. She succeeds (sort of), which sets the book up to be about her path to complete the last task, which will win the favor of the dust-wife, who will then save Marra’s sister from an evil prince.

Only that’s not what Vernon has in mind. This isn’t the book you think it will be. The tasks are important but only because they demonstrate Marra’s character and how she is changing. The traditional narrative of complete the tasks, win the quest isn’t going to work here – and with that choice, Vernon has written a much more interesting book, one that sparkles with her usual energetic and clear prose, wit, and heart.

There are known fantasy tropes here – but Vernon always comes at them from a direction you don’t anticipate. She takes us to a goblin market that isn’t quite what you expect. There is a demon-ridden chicken and an almost Prachettian witch-adjacent crone. And there are delightful descriptions that compress all you need to know in one sentence: ‘‘Marra had grown up sullen, the sort of child who is always standing in exactly the wrong place so that adults tell her to get out of the way.’’

Nettle & Bone is full of delights and surprises – and proves that Vernon has more than a few tricks left up her sleeve. 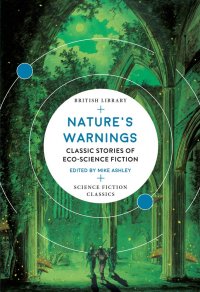