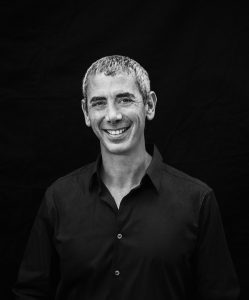 Steven Kotler is a New York Times bestselling author, an award-winning journalist, and the Executive Director of the Flow Research Collective. He is one of the world’s leading experts on human performance. He is the author of ten bestsellers (out of thirteen books total), including The Art of Impossible, The Future Is Faster Than You Think, Stealing Fire, The Rise of Superman, Bold and Abundance. His work has been nominated for two Pulitzer Prizes, translated into over 40 languages, and appeared in over 100 publications, including the New York Times Magazine, Wired, Atlantic Monthly, TIME and the Harvard Business Review. Steven is also the cohost of Flow Research Collective Radio, a top ten iTunes science podcast. Along with his wife, author Joy Nicholson, he is the cofounder of the Rancho de Chihuahua, a hospice and special needs dog sanctuary. His new novel, The Devil’s Dictionary, is out April 19, 2022 in celebration of Earth Day.

Your latest book, The Devil’s Dictionary, is a sequel to Last Tango in Cyberspace. Tell us a bit about world where the series takes place, and the characters who inhabit that world. 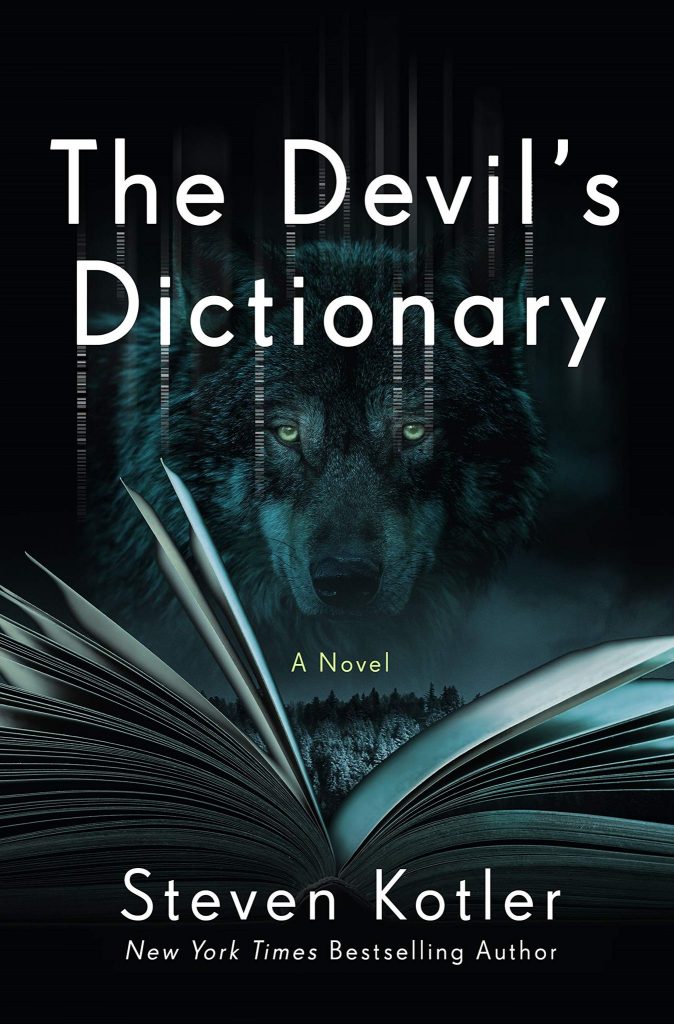 Both books are near-future sci-fi thrillers. They take place in a version of our world, some fifteen to twenty years from now, where the major environmental catastrophes we currently face—climate change and mass extinction—have been averted. I wanted to explore the shifts in society that would be required to fight back against these issues.

Lion Zorn is the lead character. He’s an empathy tracker or em-tracker, for short. Em-tracking is a talent—though it was once called a “syndrome”—tied to a genetic mutation. It appeared in the early 21st century, in a thin slice of the population, often as the result of an emotionally charged inciting incident. A few months after the incident, the brains of em-trackers show significant rewiring: Acute perceptual sensitivity, rapid pattern recognition, hyper mirror neuron activity. It’s a long list of changes with one major result: A wildly expanded sense of empathy.

Em-trackers feel for all people, of course, but they also feel for plants, animals and ecosystems—or what researchers call “cross-species empathy.” Additionally, the empathy they feel is more than individual, it’s cultural. Em-trackers can feel how cultures collide, the mashup of minds and memes, the winners and losers and whatever truth remains. In Lion’s case, he’s like a cultural prediction engine—a lie detector for potential possible futures.

In The Devil’s Dictionary, when a routine em-tracking job goes sideways and em-trackers themselves start disappearing, Lion finds himself not knowing who to trust in a life and death race to uncover the truth. And when the trail leads to the world’s first mega-linkage, a continent-wide national park advertised as the best way to stave off environmental collapse, and exotic animals unlike anything ever seen on Earth start showing up inside the park―Lion’s quest for truth becomes a fight for the survival of the species.

Will there be any further installments in this series?

Yes. I’ve been sketching out a third book for a little while now, and will probably start writing over the summer.

“Empathy-for All” is the big theme at the heart of The Devil’s Dictionary, what does that phrase mean?

“Empathy-for-All” is the ability to feel empathy for all beings. Sure, it means feeling empathy for all humans. Really, it means feeling for all plants, animals, and eco-systems—or what scientists call “cross-species empathy.” To rise above our current environmental challenges, we need a massive shift in consciousness. Technically speaking, we need to expand what psychologists call “our sphere of caring.” We need to feel for forests the way we feel for family.  We need to love the planet like we love our children. We need empathy-for-all.

There’s no choice really, not if we want this better future. The problem is an information-processing bottleneck. Every second of every day, our senses gather millions of bits of information. Yet, the conscious mind can only process a few thousand bits at once. As a result, filtration is the first order of business for brains. We constantly sift and sort data, trying to tease apart the crucial from the casual.

So what gets filtered out? Almost everything. Less than one percent of what the senses detect makes its way up to conscious awareness. Anything not critical to our survival is gone. Anything that doesn’t align with our goals and needs as well.

And this is an issue in the modern world. Today, we live in boxes. We spend our days staring at other boxes. Sometimes, we live in boxes while staring at inboxes. So the brain believes box-world is what’s important and filters out all the rest. The natural world gets erased from our field of attention. Plants, animals and eco-systems become mostly invisible. Our values and lifestyles blind us to the web of life. This is to say, if you ask psychologists why we’re in the middle of a giant biodiversity crisis, one common answer: we can no longer see the very things we’re trying to save.

How do we reboot “ecological perception”? Simple. Empathy. This is the tool evolution designed for exactly this challenge. Empathy is perceptual bridge building. Empathy both tells the brain to pay attention and widens our sphere of caring. If our species is interested in solving the ecological challenges we now face, empathy-for-all is the critical next step. And if you’re interested in what this world might look like, The Devil’s Dictionary is one glimpse of that future.

Your near-future thrillers are modern takes on the cyberpunk genre, often drawing comparisons to William Gibson and Neal Stephenson. Were they major influences? What other works or authors inspired you?

For sure, Gibson and Stephenson had a big impact, especially Pattern Recognition and The Peripheral by Gibson, and Zodiac by Stephenson—which is the first cyberpunk book about serious ecological themes. Also, cyberpunk owes a debt to noir detective fiction, so it’s hard to escape the influence of Raymond Chandler.

Additionally, Charles Yu’s How to Live Safely in a Science Fictional Universe, David Wong’s Futuristic Violence and Fancy Suits, and Andy Weir’s Artemis all rubbed off on me. Plus, there’s a bit of magical realism in The Devil’s Dictionary (debt owed to Gabriel Garcia Marquez) and a bit of meta-fiction (debt owed to Thomas Pynchon) and, because of my background as a reporter, a lot of new journalism—especially the work of Joan Didion.

Lastly, Dune, by Frank Herbert—because you can’t write a sci-fi eco-thriller without being seriously influenced by Herbert’s vision.

The Devil’s Dictionary is also the title of the famous satirical volume by Ambrose Bierce from 1911. Does your book owe anything to that work?

I don’t want to give too much away, but I love Bierce’s book. It’s hysterical and poignant and yes, a couple Bierce quotes do show up in my book.

In addition to novels, you also write non-fiction, and run the Flow Research Collective, devoted to “Exploring the Frontiers of Human Possibility.” What are your principle areas of study?

The Flow Research Collective studies the neurobiology of peak human performance—meaning we study what’s going on in the brain and the body when humans are performing at their very best. We do this work in conjunction with neuroscientists and psychologists at institutions like Stanford, USC, and Imperial College in London, and organizations such as Deloitte and Formula 1. We work in about 45 different countries. Our central focus is “flow,” or those “in the zone” moments where we feel our best and perform our best. Our goal is to figure out exactly how the brain produces flow, and to use this information on the training side of our company, to continue to help individuals, organizations and institutions achieve incredible levels of peak performance.

How do the different parts of your working and intellectual life, fiction and non-fiction and speaking and study, influence one another?

For me, everything blends together. My career has been focused on a single question: What does it take to do the impossible? I’ve asked this question in every domain imaginable. In sports and science, business and art, culture and technology, investigating these paradigm shifting moments and the neurobiological changes that underpin them has been at the center of my work.

Tell us about your latest non-fiction book, The Art of Impossible: A Peak Performance Primer.

The Art of Impossible is a practical playbook for peak performance. It’s based on three decades of research into those moments when the impossible become possible.

During this period, I worked with the best of the best, and conducted extensive neurobiological research into what allows individuals and teams to pull off such extraordinary feats. Everything I’ve learned was systematized into a how-to format that anyone can use to significantly improve their lives and their performance—this is what The Art of Impossible is about. 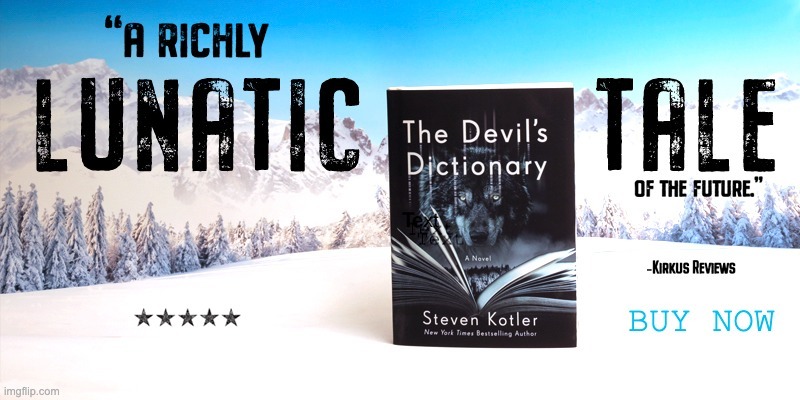 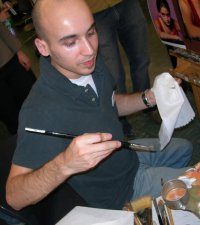