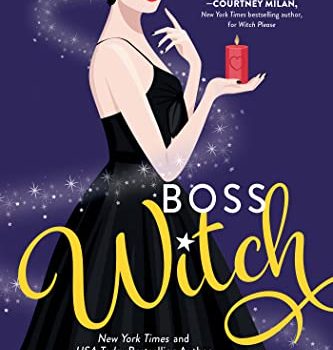 Feminist fantasy romantic comedy novel, the second in the Fix-It Witches series. A perfectly logical witch and a dedicated witch hunter shouldn’t have feelings for each other, but can’t resist.

Young-adult SF novel, second in the Unstoppable series begun in Victories Greater Than Death. Rachael and Elza find the dreams they left Earth for aren’t coming out right.

If Anders’s first volume, Victories Greater than Death, leaned a bit heavily on classic SF-style geek valorization, with brilliant misfit kids from all over the world joining a starship crew of the Royal Fleet, Dreams Bigger than Heartbreak develops them into more compelling and conflicted characters who have learned to confront loss and rejection as well as to pull off hairbreadth escapes and brilliant last-minute improvisations.

Young-adult fantasy novel. The Ladybird Scouts look like a prim social organization, but are actually trained to hunt intergalactic parasites.

SF time-travel novel. A nuclear scientist in 1986 Chernobyl the day of the meltdown gets transported to 1992 Armenia to meet her dying daughter, then further into the future to save a granddaughter.

Bond, Gwenda: The Date from Hell

Humorous fantasy romance novel, the second in a series about a woman who teams up with the devil’s son to prevent the apocalypse.

Fantasy novel, first in the Vagrant Gods trilogy. The exiled prince of a defeated kingdom steps into the role of a legendary assassin to inspire a revolution.

Military science fantasy novel, the first in the Blood Gift duology. A young woman fights racism and hides her blood gift powers as she goes through the Praetorian Trials to get revenge on her grandfather’s killer.

Mainstream/postmodern novel with SF elements, followup to A Visit from the Goon Squad. Bix creates Own Your Unconscious, a technology that lets users access the memories of others if they share their own.

Fantasy novel, Ford’s final, unfinished at the time of his death. Introduction by Neil Gaiman.

Graphic novel adaptation of Gaiman’s short story, illustrated by Doran. An elderly British widow buys what turns out to be the Holy Grail from a second-hand shop.

Ganguly, Gigi: One Arm Shorter Than the Other

Climate-based SF novel showing five possible futures for attendees at a 2054 Buenos Aires climate conference, from a dystopian hypercapitalist world to an effort at a communal utopia. Technical details scattered throughout and an academic introduction and afterword help explain the modeling on which the futures were based.

Historical fantasy/magical realism YA novel set in 1956 Budapest, about an angel, a magic river, a golem, and a revolution, and Csilla, a Jewish Holocaust survivor in Hungary during a time of revolution.

McCammon, Robert: I Travel by Night and Last Train from Perdition

Collection/omnibus of two novellas: I Travel by Night (2015) and Last Train from Perdition (2016).

SF novel about a generation ship reaching its destination.

Collection by the Basque author, one of the first to write genre fiction in her language. Translated by Arrate Hidalgo. Volume six in Aqueduct’s Heirloom Book series.

Fantasy horror novel inspired by Greek myth, about twins with incredible magic and near-immortality, who will do anything to keep their family in power.

SF novel, the first in the TransDimensional Hunter series. Lynn Raven beta tests an augmented reality game and has to deal with the real world when problems crop up.

SF adventure/romance novel, first in the Andromeda Chronicles series. Loren accidentally invokes the magical powers of her mother’s necklace, sending her and her siblings into the distant future.

Fantasy novel, fifth in the Elfhome series (not counting the Project Elfhome collection). Tinker discovers she has siblings, some yet unborn.

Young-adult fantasy novel. Jani gets a job in a legendary hotel full of enchantments with the ability to travel, but also full of dangerous secrets.