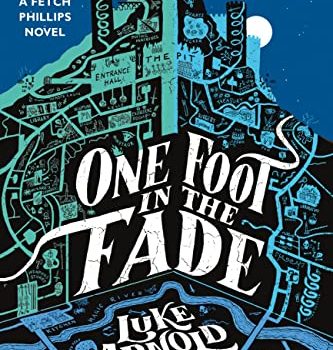 Arnold, Luke: One Foot in the Fade

Supernatural mystery novel, third in the Fetch Phillips Archives series featuring a down-and-out human PI in a world where magic has run out. Fetch investigates an angel that fell from the sky, leaving a crater in the sidewalk.

SF novel, third in the Archon series. Two parents discover that their newborn daughter bears a rare, fatal genetic condition which can be traced to a source out beyond the orbit of Saturn.

Supernatural historical horror novel set in a Japanese-American interment camp during WWII. A mysterious disease begins to spread among the interned, but it turns out to be something even more sinister: a demon infiltrating their world.

Fairytale fantasy novel. Marra, a third-born princess raised in a convent, decides to help a sister whose arranged marriage turned abusive. First she must do three tasks: build a dog of bones, sew a cloak of nettles, and capture moonlight in a jar — with the help of some unlikely companions.

It starts like a quest novel. Marra, a young princess of a small kingdom fighting for survival, is finishing her second task in a series of three. After weaving a cloak made from owlcloth and nettles, she’s currently building a dog out of bones. It isn’t going well, as you’d expect, given that she is on a quest and tasked with doing the impossible. She succeeds (sort of), which sets the book up to be about her path to complete the last task, which will win the favor of the dust-wife, who will then save Marra’s sister from an evil prince.

Only that’s not what Vernon has in mind. This isn’t the book you think it will be.

Nettle & Bone has excellently bizarre world­building. My favourite element is the dust-wives, and the dust-wife who joins Marra in her quest is a fascinating character, though I confess I find all of the characters compelling, Marra most of all.

Kingfisher’s work, with its striking voice, humanity, and gift for the relatable weird, never fails to remind me of Terry Pratchett at his best, and Nettle & Bone at times reminds me strongly of some of Pratchett’s witches – albeit updated in line with the developing sensibilities of the last half-decade. And, as with so much else of Kingfisher’s work, the more I read of Nettle & Bone, the more I loved it. I recommend it highly.

Lawrence, Mark: The Girl and the Moon

Fantasy novel, the third and final entry in the Books of the Ice series set in the same world as the Books of the Ancestor trilogy. Ice triber Yaz has reached the planet Abeth’s green Corridor, and finds it both overwhelming and dangerous.

Lyons, Jenn: The Discord of Gods

Fantasy novel, fifth and final in the Chorus of Dragons series. Two evil masterminds grapple to enslave the universe, while Kihrin fights his corruption and instability, and struggles against his destiny as a destroyer.

McMahon, Jennifer: The Children on the Hill

Fantasy novel. Third and final in the Beneath the Rising trilogy. The last survivor of Earth has a chance to rid the multiverse of the Ancient Ones who destroyed mankind.

Nicolay, Scott: And at My Back I Always Hear

Collection of eight stories of the macabre and uncanny, three new. Introduction by Gemma Files.

Historical fantasy novel retelling the story of the Ramayana’s jealous queen, instead depicting a princess who turns to magic to fight for independence from men and gods, becoming a warrior, diplomat, queen, and mother to Rama.

SF multiverse novel, second in the Journals of Zaxony Delatree series after Doors of Sleep, about a man who always wakes in a new parallel universe, from utopias to ruins. Having at last escaped from Lector, Zax is joined by Ana, another one of the Sleepers, who teaches him where his powers come from, and the cost involved.

Science fiction novel, second in the Fractal series. Humanity has colonized much of the solar system, but insurgencies and terrorism threaten the balance of the space program. 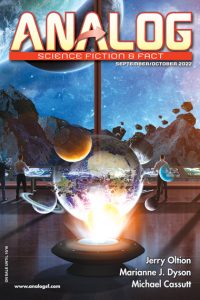 Tell us about your debut novel A Marvellous Light—the world where it takes place and the characters who inhabit that world. A Marvellous Light is a historical fantasy novel that follows two men as they become reluctantly embroiled in a conspiracy of murder, curses, and contracts. Robin Blyth is a sunshine-hearted jock who’s trying to ignore all his responsibilities when he’s accidentally named as the government liaison to a