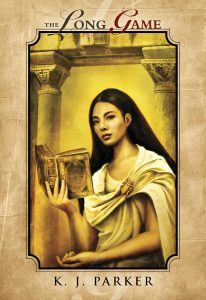 K.J. Parker may not have invented the idea of using an exasperated, put-upon narrator to under­cut the implicit pretensions of a classic fantasy setting, but he’s certainly become its reigning virtuoso. His latest novella, The Long Game, is again set in his alternate late-medieval Europe, with its not-quite-recognizable place names like Idalia or Sabades Amar but fully recognizable Latin phrases for spells and incantations. The unnamed narrator works as a kind of exorcist, capable of entering people’s minds to cast out demons that have taken residence, much as in Prosper’s Demon a couple of years ago. But both he and the demons he opposes are assigned spe­cific territories and ‘‘are answerable to their area supervisors and regional, provincial, and divisional officers’’ – in other words, to annoying bureaucracies with distinctly contemporary corporate overtones. It’s not surprising that the narrator has developed an ongoing arrangement with a particular demon, the two of them occasionally looking out for each other in the service of outsmarting their own supervisors. Each also recognizes that, despite such alliances of convenience, each side is involved in the long game of winning souls.

The narrator is on one such backwater assignment when he meets a beautiful young woman named Amalasomtha, who claims to be on a mission of her own from Idalia, a country so remote that it’s the stuff of legend and rumor. She’s also clearly unimpressed by the narrator’s authority as a representative of the Studium – the hidebound center of learning which is a recurring feature of Parker’s version of Europe – and when he tries to enter her mind with a simple spell, she responds with a psychic bolt that knocks him off his feet. Since women in his world almost never have the knack to become adepts, and since Amalasomtha has traveled such a great distance on a mysterious mission, the narrator becomes intrigued, and they become uneasy allies. He (and we) learn more about Idalia, where demons are apparently unknown and where the mental powers carefully cultivated by the Studium are nothing special. When he learns what her actual mission is, however, he has some serious second thoughts.

As is often the case, the narrator’s various digres­sions and backstory anecdotes, along with the screw­ball banter with his demon pal (especially when they find themselves occupying the same hapless victim) are as spirited and entertaining as the main plot, and part of the continuing charm of this series is its ingra­tiatingly misanthropic tone. Like many of Parker’s narrators (most notably, perhaps, the Saloninus of last year’s The Big Score), this one veers between boasting of his talents and making excuses not only for his bad behavior, but for the fact that his vaunted skills have never really paid off in the way he believes he deserves. It’s no wonder a lot of fantasy readers find it easy to identify with these guys, as morally dubious and comically self-absorbed as they may be. 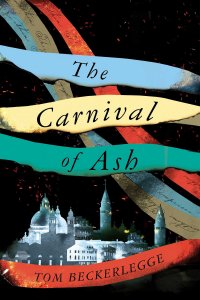 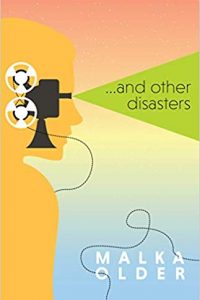 Ian Mond Reviews …And Other Disasters by Malka Older