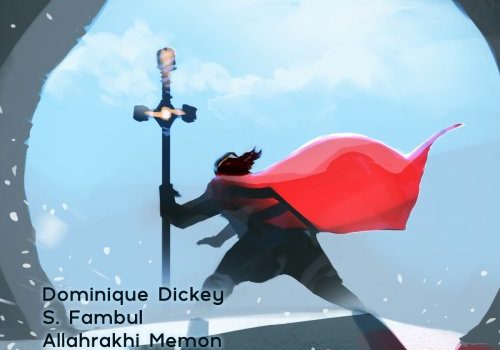 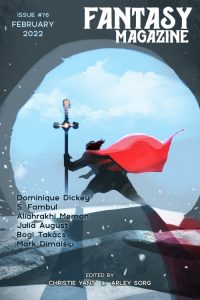 The big news out of Strange Horizons as the year opens is the increase in poetry they’re publishing, doubling their poetic offerings every issue. For fiction, the year opens with “Broken Blue” by E.M. Faulds, a story about a recently divorced woman, Katie, her adorable Labrador, and the stranger who enters her life, filling up an empty space. For all this woman, Rowan, is a balm, though, there’s something that Katie can’t shake about her, and the piece explores the way their relationship helps them, and especially Katie, find herself after a part of her life fell apart. Failed marriages and hints of magic recur in “Palm Chess” by Lucille Fuentes, in which the narrator is a movie director coming back to a place she has never been, to the island where her mother was born. Framed as part travel journal, part notes and script for the movie the woman wants to shoot, the piece is dominated by ideas of theft and appropriation under the shadow of an ex-husband who still looms over the narrator’s life. All this while the movie flounders in the face of the narrator’s own outsider status on the island. Closing out the month’s fiction, “Gentle Dragon Fires” by T.K. Rex & Lezlie Kinyon introduces Let, an old and dying woman finally willing to face her guilt and shame to try and bring back a bit of needed magic to a world ravaged by the suppression of subtle and indigenous arts. Taking on climate change and climate action in interesting speculative ways, it imagines a voice worn down to a whisper, but still audible to those willing to listen.

Over a year since undergoing some editorial shake ups, GigaNotoSaurus has been putting out some fantastic works month after month, with a simple promise – one speculative story a month over 5,000 words. The simple and direct mandate means the stories published have to stand on their own without any accompaniment, and with stories like “It’s Always Ourselves We Find in the Sea” by Bennett North, it’s easy to see why it works. The novelette is grim and striking, casting a monster as detective who can only feel anything when he’s holding the ghost of a murdered person, seeking vengeance against their killers. It’s sustained him for a long time, and yet with the latest case, another missing woman, he finds something changing about the hunt, and about his own hungers. It’s a gritty work that com­bines elements of mystery and horror to great effect.

Moving into February, Isabel J. Kim’s “Plausible Realities, Improbable Dreams” opens up the Janu­ary Lightspeed on a romantic note, finding two people who aren’t just star-crossed, but multiverse-crossed lovers. They’re both unstuck in reality, sliding through alternate versions of their lives, and yet always trying to hold to the one reality where they can be together. It’s a sweet story that still lands some heavy emo­tional punches, and works to a rather wonderful and hard-earned ending. Stephen Graham Jones then offers up a bit of alien conspiracy in his flash fic­tion “Bad Code”. In it, a child visits an uncle who is full of theories about aliens, and why the classic grays are no longer in style. Along the way, the piece plays with paranoia with a wink and a nod and a bit of authorial sleight of hand. It’s Sharang Biswas’s incredibly sharp “NeuNet”, though, that’s probably my favorite of the issue, and a piece that shows what happens when technology learns completely the wrong lessons from science fiction. It finds a company that has essentially watched The Matrix and decided that turning humans not into giant batteries but rather extra computer memory would be a great idea. All it takes is for people to be plugged in to act as quasi-living hardware. The story looks at the decision to do that to a person, the way that even such an obviously dystopian bit of technology can fit seamlessly into the fabric of capitalism and humanity. Biswas manages a subtle but devastating feat in presenting this in a way that makes sense, that is understandable and messy and real. It’s a phenomenal piece of fiction.

Fantasy ranges a bit in its offerings, through deserts and labyrinths, but also shows that not all journeys are across physical space. For the narrator of Dominique Dickey’s “Slow Communication”, the most impor­tant movement is toward the person they truly are, and away from the gender and familial roles they’re expected to fit into in order to participate in a multi-generational conversation between their family and an alien being. They are pressured to not change too much, to not become unrecognizable, and yet the story shows the damage of that, and the way that it keeps a conversation that could be much faster and more pro­ductive stuck in slow motion. S. Fambul’s “Cousins Season” builds on that theme as well, showing an extended family caught in a kind of bargain, a kind of obligation of servitude preparing meals for the mysterious cousins. Except that a group of young people has a plan to free their elders and themselves from the weight of obligation. The piece mixes a bit of faerie magic with a nuanced take on family and freedom. To dip back into the poetry pool a moment, “The Prophet, to His Angel” by Bogi Takács also pairs well with the theme of obligation and defiance, as the titular prophet receives words from his angel on a mountaintop. He is filled with scripture, with purpose, but also still himself, holding something back even against the power of the sight of an angel. 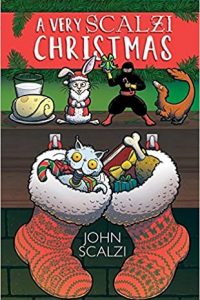