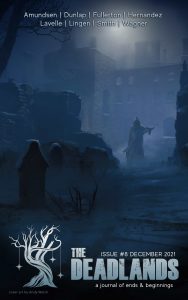 Fantasy #75 starts 2022 off with two of the better stories they’ve published in their latest incarnation. There are also two flash fiction stories, but they don’t measure up to the shorts. There are many legends and myths of the banyan tree, but as far as I know, Shalini Srinivasan creates a brand new one with “Markets: A Beginners Guide”. Mortals cannot visit a banyan market but Lavanya believes the spirit of her ill mother goes there. This can be a story of hopeless grief or hopeful faith. Your call. Mr. Byerley, 76, regularly forages the trash left on the curb in “Free Coffin” by Corey Flintoff. He finally finds something he can someday use – a handsome coffin. It is not until, with the help of a neighbor boy, he gets it home that he discovers far too much about it.

Fantasy #74 also has two flash stories and two shorts. In Aline-Mwezi Niyonsenga’s “Saviour of the Light Market”, Mukamwezi believes scholar­ship student Lisa has gained access to the Light Market. “Those who have access to the Light Market can travel in and out every full moon, drawing what­ever they want from its bounty.” But Mukamwezi has another destiny. Although this one packs a lot into its short length, I wish it offered more clarity. “The Rainmakers” by Megan M. Davies-Ostrom is based in a post-apocalyptic, climate-challenged world that needs water. A Rainmaker must be in drag to dance and summon downpours for the dry land. They also have to be able to fight, when needed, the Haters. Can young Thomas succeed as a Rainmaker? At least he has Clementine Devine’s instruction to help. A charming queer story.

There are three good originals for The Deadlands #8. Margaret Dunlap poetically portrays winter as a bitter old women whose life is shortened and abilities negatively impacted by climate change in “L’hiver est assis sur un banc”. It’s not an entirely unsympathetic portrait – until we are reminded that the old gods still demand sacrifice.

In “Roots of Lamentation” by Marissa Lingen, an ecology activist dies on the lush banks of the Orinoco River and awakens to an afterlife in the frozen north, one loosely based on the ancient Greek conception of Hell. Her location on the Cocytus River implies she was either a traitor or a fraud in life, but it is also the river of lamentations. Her contempla­tion of her situation is more interesting than one might expect.

The narrator of Daria Lavelle’s “The Aftertastes” explains that eating and drinking in the afterlife can establish connections to the world of the living. Of course, Death never really rewards the dead. Then Tony, “The Chef,” cooks up ways for the dead to return to life via victuals. But can he also outwit Death themselves?

Nightmare #112, first of the new year, has one ex­tremely short work of flash fiction I will skip and two original short stories. Ian Muneshwar’s “Dick Pig” tells of an unusual inheritance. Aunt Norma and her nephew Edwin shared many secrets the rest of the privileged Caldwell family would have found distasteful or perverse. When she died, she didn’t leave her house to Edwin, but she left him a secret to discover there. Thanks to clues unnaturally pro­vided via a hookup app, Edwin goes looking for it. It’s the sort of story one finishes and then goes back to re-read. “The Elements of Herself” by Kiyomi Appleton Gaines is a very dark fairy tale about what happens to a beautiful girl who rejects all suitors.

Nightmare #111 presents three stories with po­tential that would have benefitted from, well, more. In “The Plague Puller” by Manish Melwani, Ah Keng – whose misfortune and addiction to opium has left him with no choices but to work for the House of Death and convey corpses in his rickshaw – dis­covers his friend Leung, dead of cholera. The two had travelled together to Singapore from their home in China long before. Now, without proper burial, Leung’s spirit will be lost, and he will become an angry, ever-wandering ghost. This is an endearing story that I felt would have greatly enhanced by more context and detail about the Singapore setting.

With “To Rectify in Silver”, Steve Toase also leaves a good premise – individuals working at an archeological project dealing with the consequences on an on-site death – too abbreviated to truly serve the story. This is even more true of “The Mothers” by Laur A. Freymiller. Despite an interesting concept, there’s not really enough of this flash piece about miscarriage to succeed. 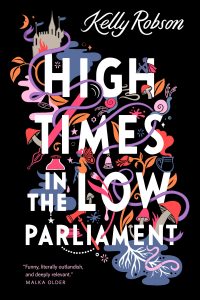