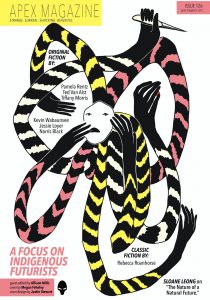 While you, the reader, embark upon 2022 with whatever the world has to offer you, I, the reviewer, will spend this month and the next finishing up the stories of 2021. The 20th issue of Fiyah – “Love, Death, and Androids” – shows how our interactions with robots say much more about us than about them. “The First of Us: The Geordonn Smith Story” by K.S. Walker is told through interviews with four people who were involved: a witness, a scientist, and two politicians. They all have enormously different views of what happened when a baby was taken from the car crash that killed his parents and raised by mechanoids. This interesting storytelling technique layers plenty of ambiguity into a naturally fraught situation. I always appreciate seeing working mothers in speculative fiction, so I loved that “Smiley Faces with Blackberry Jam on Toast” by Cynthia C. Scott focuses on the domestic sphere as a working mother is upset when her wonderful robotic nanny malfunctions and needs to be replaced. She, her husband, and their daughter all have different reactions to the disruption. In “Performance Review” by Maryan Mahamed Slip is also a domestic robot, but he is constantly being returned to the factory by different owners. We get a sense of the issues involved, both from his narration and from the service log entries. He does much better in the house of a Somali Muslim family, where he bonds with the grandmother despite them not sharing a language. But there’s another disruption in his future as well.

“The Trumpet Player” by Nicole Givens Kurtz features Jazz, a robot who has named himself and created his own identity as a musi­cian in a world split by the robot Uprising. He accepts an invitation from an old friend to play in a bar in Botsville on Mars, but quickly runs into problems with the humans there. True in­tegration seems a long way away for them (and for us). It’s the human worker that’s the focus in “The Body of Theseus” by Emir G. Park where Malik is working in debt to a scavenging company and is constantly monitored. But when he runs into Theseus, the robot that led a rebel­lion, he glimpses the possibility of a different life. Cashing in on his discovery would be lucrative, but the affinity between downtrodden working robots and downtrodden working humans is as old as robot fiction itself.

Building on the theme of robots and how we relate to them, November’s Clarkesworld opens with “Mom Heart” by Will McIntosh. The nar­rator is a recent widower and father to two young daughters, one of whom is autistic. The death of their mother has been devastating to all of them, and he has little idea of how to manage on his own. One desperate afternoon he programs his late wife’s voice into a household robot and uses it to talk to the girls. The question of if and who this will help is explored neatly in the story. Then in “Dark Waters Still Flow” by Alice Towey, the narrator NEWT is an AI helping oversee a water treatment plant. NEWT has a good relationship with Jerafina, a woman from a minority refugee community, but there are strange malfunctions popping up and the Senior Sage seems to be ac­cusing Jerafina of sabotage. NEWT is a sweet narrator who also loves poetry and has to navigate these human conflicts. This has quite a bit more drama than your average infrastructure story.

My favorite story of the issue is “This Stitch, This Time” by Anna Martino. A space suit seamstress is getting Morse code messages in her stitching, and they seem to be coming from her dead grandmother who worked on the Apollo space suits. They’re warning of a looming catas­trophe, and the question is whether or not it can be averted or anyone saved. This has a great nar­rative voice and a tense but never melodramatic build up. The last story brings all the drama in “The Death Haiku of the Azure Five” by L Chan, a really cool story about sentient weaponry whose mission is to help a civilian population escape a doomed planet as the enemy closes in. They each get to compose their own death haikus and broadcast them prior to their end, and we see how each of them contributes to the battle. I found the ending unsatisfying – I’d have liked to learn more about how events played out – but the premise is awesome.

With its October issue Apex puts the focus on Indigenous Futures. Guest editor Allison Mills has assembled an excellent set of six stories, plus interviews, essays, and a reprint. The range here is important as the stories imagine multiple ways that indigenous peoples might exist in and influence the future. Three of the stories involve people existing in a settler/colonized future, as in “Security Breach at Sugar Pine Suites” by Pamela Rentz (Karuk Tribe). Birdie works as a maid in a Space Casino and hates it immensely; she winds up locked into a celebrity suite when bandits raid and the station goes on lockdown. In this really funny story we see that even the people who appear to be benefiting from the system are trapped in it. “Happy Trails” by Theodore C. Van Alst, Jr. imagines Coyote wandering through Chicago on St. Patrick’s Day, too drunk to shift out of dog form but still feeling the Indian trails that underlie the city streets. As in any good Coyote story, hilarity ensues. The final story of the issue, “An Incident at Hellpoint Prime” by Norris Black (Tyendinaga Mohawk Territory) is flat-out horror that begins with the sheriff of a company mining world finding five skinned corpses hanging up. His deputy tips him off to a legend of aliens that were not-quite-wiped out when the company set up, now living as skin thieves and possibly evolving. The sheriff is skep­tical, but events will reveal the truth of the matter.

In the context of the issue, I see Kevin Wa­baunsee’s (Prairie Band Potawatomi) story as transitional. In “Spirits of the Broken Lands” Gwisen is Shawdese, exiled and colonized by Thersians. He’s busking for money, showing off little bits of Shawdese magic while playing up all the stereotypes the Thersians have foisted onto his people in their absence. As he gets rousted by the police a powerful Thersian mage steps in, inviting him to his house and then demanding an explanation of the performance – flatly refusing to believe Gwisen’s explanation of his true magic. What happens next has the potential to transform everything in the Shawdese/Thersian world. Wabaunsee’s 2019 story “The Great Mandini and the Dead Man’s Hand” in Strange Horizons stuck with me, and this one is also memorable.

“Marked By Bears” by Jessie Loyer (Michel First Nation) then imagines a future where apoca­lypse has decimated humans, and animal tribes have taken back over. They demand sacrifice but also help the remaining humans survive, starting to restore a balance that was disrupted long ago. This is a surprisingly beautiful story for being so dark. Finally the flash piece “When Evening Arrives” by Tiffany Morris (Mi’kmaw/settler) brings us an indigenous future where aliens ar­rive to do a survey. The Elders of Stella’s people lead them to a protected area to show the visi­tors how colors and language and time interact, and a genuine connection is made. I hope many readers get the chance to pick up this issue, since it illuminates diverse perspectives from people whose voices have been suppressed for too long and who have a more-than-hypothetical view of the classic science fictional first contact situation.

From the usual run of stories in Strange Hori­zons in October, two of my favorites are “Night Shift” by Max Franciscovich and “Bespoke Nightmares” by Carolina Valentine. In “Night Shift” Mal, a trans man, and Livia, a trans woman, have lost their baby daughter. Medical bills are stacking up and while Livia is almost catatonic with grief, Mal is back at work both at his office job, and a night shift job doing… something very different. This story is especially disturbing at the end, in the best of ways. In “Bespoke Nightmares” the narrator is a woman who can easily sew nightmares, but dreams are much more difficult. So it takes some doing for an entitled rich guy to cajole and threaten her into making two dreams just for him. She pulls out all the stops, and by the time he comes in begging for a third he is a very changed man, probably not at all in the way he wanted. The descriptions of the dream and nightmare materials add a lot of charm to this horror story.

At the end of October Strange Horizons went in an experimental direction with game-stories under the heading “Strange Lusts”. I played/read through two of them and both were fas­cinating in different ways. Inevitably there’s a choose-your-own-adventure feel to this style of storytelling, and I’ll admit that I couldn’t follow all the narrative forks, so I’ll paint these in broad strokes. “Heat from Fire” by Anna Anthropy positions you as a trans woman witch doing sex work remotely during the pandemic, still gath­ering materials for some powerful ritual magic. The story is told mostly through texting – your coven’s group chat lets you know that they’re not happy with what you’re doing – and sexting once you make contact with Asphodel. How hot will your demon sex be? You get to decide. Natalia Theodoridou strikes a very different tone with “Pockets, or When the Giants” – and that different tone is also literal, since this story/game has a lovely atmospheric soundtrack. Here you and your partner exist in a City that is largely a wasteland after the giants came from the sea. You choose your partner and their gender identity, how to interact with them and also (in the track I followed) with a dog you find while scavenging. The through line is as allusive as any Theodoridou story. 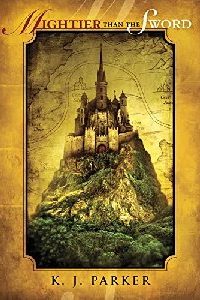