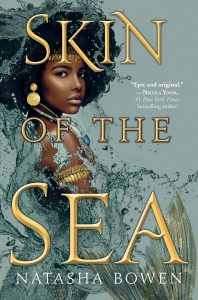 Blending “The Little Mermaid”, West African culture and spiritual traditions, and real history from the 15th century, Skin of the Sea by debut novelist Natasha Bowen is a striking young adult historical fantasy. The only downside to reading this book now is that you’ll have to wait until next year for the sequel.

The story begins with a ship. Bound in its belly are dozens of Africans taken from their homeland by force. Some will survive the harrowing journey, but many will die along the way. No matter how they end up in the water, the Mami Wata will be there. When the orisa Yemoja left the waterways of mainland Africa for the open ocean, she did so to ensure those taken by slavers would find peace after death. To aid her, she turned seven humans into Mami Wata, water spirits depicted in the novel as mermaids.

One of those Mami Wata is Simi. While her sib­lings have accepted their role as Yemoja’s couriers without complaint, Simi is constantly questioning her place. She is haunted by fading memories of her past human life, and cannot – or will not – let go of her past. The more souls she ferries across the sea, the more pieces of her past she collects.

Kola is the boy who changes everything. When he tumbles over the side of a slave ship, Simi arrives to collect his soul, as usual. This time, however, she makes the impulsive choice to save him, to keep him alive. The consequences of that choice are far greater than she could have an­ticipated. A war is brewing between the orisa, and Simi’s seemingly selfless act will tip the balance in unpredictable ways. Tensions are also heating up on land. Kola’s twin siblings have been kidnapped, and in their hands they hold the fate of not just their village but of the orisas as well. To make things right with the Supreme Creator and to recover the children, Simi and Kola must venture into a dangerous land, all while pursued by a trickster orisa who will do everything in his vast power to ensure they fail.

Bowen shows us different ways to resist. Kola and Simi resist in big, bold ways. Esu, the trickster orisa with sinister plans of his own, finds sneaky and manipulative ways to resist. The Mami Wata were how Yemoja pushed back against an unjust system. She knows her act cannot break or change the system, but it can create a pocket of peace amidst a sea of chaos and agony. A candle cannot beat back the darkness, but even a little light is bet­ter than nothing. Telling the story of survival is just as important as revolutions and overthrowing evil empires. Sometimes the system is too big for two teenagers to dismantle on their own. Sometimes all you can manage is a tiny, personal act.

Bowen’s worldbuilding is evocative and expres­sive. This is a fascinating and tangible world, one that centers Africans and the Black diaspora. When white people appear, it’s only tangentially, and they are referred to by the Nigerian word “òyìnbó.” Where the novel struggles is with characterization. For me, Simi and Kola are well developed and feel real and layered, but the rest are hastily drawn sketches. There are hints of depth, but not nearly enough. Awful things happen to secondary characters, but because we only see those characters from Kola’s or Simi’s points of view, what happens to them has little emotional resonance. Here’s hoping we get to know everyone else a lot more in the sequel.

Readers who loved Namina Forna’s The Gilded Ones or Jordan Ifueko’s Raybearer should definitely pick up Skin of the Sea. We seem to be in the midst of a small wave of excellent YA fantasy novels featur­ing Black teens on epic quests across a magical and dangerous African-esque landscape. Not that I’m complaining! Keep them coming, publishing industry. I’ll gladly read every single one.

Paula Guran Reviews Monster, She Wrote by Lisa Kröger & Melanie R. Anderson and The Twisted Ones by T. Kingfisher