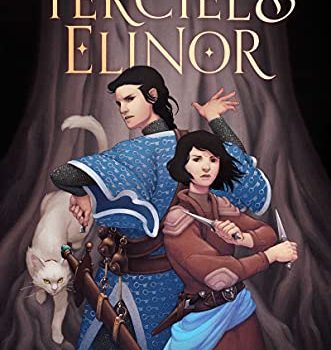 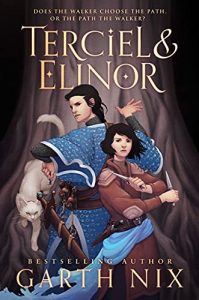 Terciel & Elinor is a prequel to Garth Nix’s blockbuster Sabriel, taking place more than a decade before that character was born. Readers need not worry that they must be familiar with the Old Kingdom in order to enjoy this new book, however. Nix provides plenty of backstory for his fans to enjoy, but anyone who relishes a good magic-filled fantasy will embrace the high-stakes drama that Terciel & Elinor has to offer.

In alternating chapters, the two title characters are introduced as they grow up in distant locations and dramatically different circumstances. The orphan Terciel is under the care and training of his great aunt, the Abhorsen, and destined to guard the boundary of Life and Death. He must learn to wield great magic and fight all manner of horrors because, as he has been told, that is his destiny. Thoughtful and dedicated, Terciel wonders about all of the choices that have been made for him but is steadfast in his devotion to doing what is right. He is a loyal soldier in a war he was drafted to join as a child and thus the perfect hero. He also doesn’t know what he is missing in life, until he meets Elinor.

Firmly ensconced in a faded estate in Ancelsti­erre that has seen its better years, Elinor lives a life completely absent of magic. Ostensibly under her mother’s control, she has been primarily raised by her smart and loving governess and the estate’s elderly groom, a former circus performer who has taught her everything from juggling to theatrical sword play in an effort to keep her out of trouble. Elinor’s unorthodox upbringing has her facing a lot of challenges as a young woman; she is not prepared to make her way in ‘‘normal’’ society and is far more at home in her deceased father’s clothes and running about the countryside. Concerns aboutthe future become moot, however, when she finds her­self and her home the target of a murderous sorcerer, and a bloody confrontation ensues. Terciel arrives to save the day in what seems to be the start of a great and exciting (and magic-filled) romance. Nix is a wonderfully sly writer, however, and quickly sends the plot off in unexpected directions. Terciel finds himself with a mystery back home while Elinor embarks on a career as drama teacher’s assistant and hopeful student of magic. (Fans of boarding school books should take note of this development.) Yes, of course they will get back together, but it’s no straight line to that moment. Nix has many other places to go and revelations to uncover before the destined romance officially begins. There is a lot of story here, after all, a great big story that envelopes many characters, and each and every page of it is to be relished en route to that first kiss.

I won’t spoil the end of Terciel & Elinor, or the beginning of Sabriel, which is also part of that ending. I will say that this is an exciting book, populated with all sorts of smart students and teachers and witty mo­ments and, yes, the romance is a definite delight. As it happens, this was my first foray into the Old World and I felt right at home there. As his fans know, Nix is a consummate storyteller and first-class world-builder. From the earliest hints of the ‘‘wind from the north’’ to the first climb up the fig tree, he conjures a remarkably vivid setting. As a prequel or a standalone, Terciel & Elinor is magical adventure at its finest. 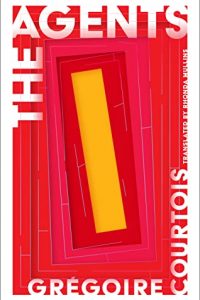