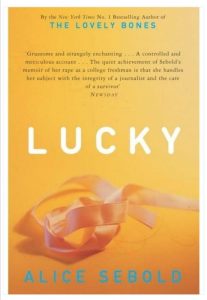 Author Alice Sebold, who wrote fantasy The Lovely Bones (2002), has been in the news recently because a man who went to prison based on her testimony was released and had his conviction overturned. In Sebold’s 1999 memoir Lucky, she described her sexual assault and the trial of alleged perpetrator Anthony J. Broadwater. Broadwater, 61, spent 16 years in prison and was a registered sex offender after his release, but always insisted he was innocent. In November 2021, a New York state judge agreed, rescinding his charges and sex offender classification. The conviction hinged on a hair-analysis technique that has since been discredited, and Sebold’s incorrect identification of Broadwater.

Broadwater’s case was reexamined because Timothy Mucciante, an executive producer on a planned film adaptation of Lucky, had concerns about some of the details he read in the script. (The adaptation has since been canceled.) Mucciante quit the production and hired a private investigator to look into the case, then brought the information he uncovered to defense attorney David Hammond.

Sebold was attacked in 1981, when she was a freshman at Syracuse University. Sebold initially identified someone else in a police lineup, but later identified Broadwater at trial.

Broadwater told the New York Times, “I just hope and pray that maybe Ms. Sebold will come forward and say, ‘Hey, I made a grave mistake,’ and give me an apology. I sympathize with her, but she was wrong.”

Sebold and Scribner initially declined to com­ment, but Scribner later released this statement: “Following the recent exoneration of Anthony Broadwater, and in consultation with the author, Scribner and Simon & Schuster will cease distribu­tion of all formats of Alice Sebold’s 1999 memoir Lucky while Sebold and Scribner together consider how the work might be revised.”

40 years ago, as a traumatized 18-year-old rape victim, I chose to put my faith in the American legal system. My goal in 1982 was justice – not to perpetuate injustice. And certainly not to forever, and irreparably, alter a young man’s life by the very crime that had altered mine.

I am grateful that Mr. Broadwater has finally been vindicated, but the fact remains that 40 years ago, he became another young Black man brutalized by our flawed legal system. I will forever be sorry for what was done to him.