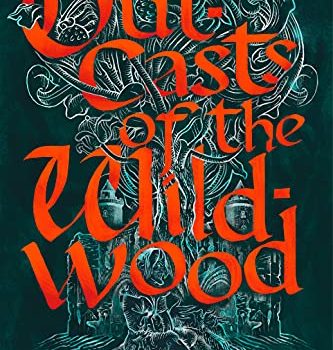 Atwood, Rachel: Outcasts of the Wildwood

Historical fantasy novel, book two in the Walk the Wild With Me series. Robin Goodfellow is cursed. Half of each day he must spend as a hideous gnome with a bit of magic and near immortality. The other half of the day he can live as Robin Hood, archer of legend.

Fantasy novel. Inventor’s apprentice Jacs participates in the Contest of Queens to prove that a queendom is strongest when united.

SF thriller novel. The last colony ship with the last humans (after robots killed all the rest) has to train all the humans for colonization on a planet filled with monsters, and the robots are all programmed to kill each other.

Collection of the four stories in Chambers’s King in Yellow cycle. Edited by Lisa Morton. This is a signed (by the editor), limited edition of 500, the 2nd volume in Borderlands’ Little Book Series IV.

Middle-grade fantasy novel about an orphan girl with the ability to unlock anything.

Fantasy novel. Destitute sisters make a deal with a river goddess, but when she comes to collect they end up on a dangerous quest through the rainforest.

Satiric SF novel about agents who don’t know what they’re agents of, in a building where they live and work, watching data and battling each other on empty floors — and defenestration seem to be the only way out. Translated by Rhonda Mullins from the French Les Agents (Le Quartanier 2019).

DeMeester, Kristi: Such a Pretty Smile

Epic fantasy novel, the first in the Engines of Empire trilogy about revolution in a world of clashing Guilds and magic-fueled machines. The heirs to the powerful Hawkspur family tackle trouble in different areas.

Horror novel/ghost story set in the 1970s. A former Vietnam War protester, who backed out of a bombing that killed a friend, tries to build a new life after the war and starts seeing her dead friend’s ghost. Part of the Conversation Pieces series.

Nagamatsu, Sequoia: How High We Go in the Dark

Reading Sequoia Nagamatsu’s How High We Go in the Dark is not always a pleasurable experience. Emotionally gritty, uncomfortably plausible, and incredibly timely, this novel is packed with pain, grief, loss, and the kind of possibilities that make you want to forget how much you don’t know about the future. However, it’s also a book you can’t put down once you start reading, because the poetry of pain and the strength of the characters inhabiting its pages pull you in and make it impossible to not share their feelings, to not join them in that brief moment of their lives we’re being shown.

July 4, 2014 admin Comments Off on New and Notable Books, July

A podcast recorded live at ICFA this past March 2013, this conversation focuses on steampunk. With author Jay Lake and scholar Austin Sirkin, we discuss the international steampunk scene, the history and amorphous definition of the genre, amazing scientific heroes of the past, and nerfpunk, among others. http://locusmag.com/Blog/LakeSirkin.mp3