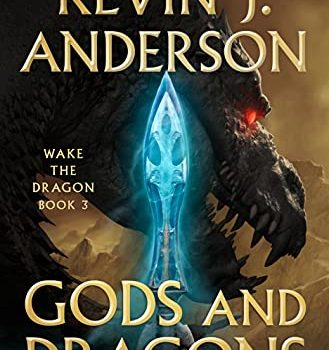 Epic fantasy novel, the third in the Wake the Dragon series. Nations which have been at war for a thousand years must set aside generations of hatred to form an alliance against a new, more deadly, enemy.

After a king is assassinated, the guard who was blamed for it must team up with the hired assassin and a witch receiving messages from the dead king, to find out who is really to blame for the king’s death.

Bell, Darcey: All I Want

Mystery/thriller novel with elements of horror. A young couple decides to renovate an old rural mansion once used as a mental hospital, but Emma starts to wonder if it’s haunted, while everyone else blames pregnancy hormones.

Military SF space-opera novel of interstellar war, second in the Cruel Stars series. After a group of “species purists” attacked any human with genetic or neural engineering, Earth has barely survived. The ragtag crew that repelled the attack must now help rebuild civilization, while enemies old and new still threaten.

Fantasy mystery novel, fifth in the Magical Bookshop series. Violet, the proprietor of the magical bookshop Charming Books, marries the police chief in a Christmas wedding, but a mysterious book collector is found dead at the reception.

Novel with fantasy/magical realism elements about a misfit boy in Cienfuegos, Cuba. Sensitive and intelligent young Rauli believes three things: he was born in the wrong body, he is Cassandra of Troy reincarnated, and he will die in Angola at 18. Translated from the Spanish by Anna Kushner.

Collection of 21 stories about women reaching their breaking points, from Cassandra and witches refusing to be burnt to radioactive cockroach warriors.

Fantasy novel, 16th in the Elemental Masters series. After Buffalo Bill temporarily hires a new sharpshooter, who also happens to be an Elemental Master of Air, Annie Oakley discovers that she and her husband Frank are magicians of rare ability.

Science fantasy novel. Isobel’s skill at voice-based spell casting in the Sparkle Dungeon medieval rave-themed VR games earns her a job working on the games, but she learns a “conceptual thunderstorm” could destroy reality (or at least California).

Offutt, Jason: The Girl in the Corn

Horror novel. As a child, Thomas Cavanaugh sees a fairy that leads him into a cornfield to the Empty, an encounter that scars him, until as a troubled young adult he returns to face the Empty once and for all.

Parker, K.J.: A Practical Guide to Conquering the World

Fantasy novel, the third and final book in The Siege series, set after the events of Sixteen Ways to Defend a Walled City.

Lovecraftian fantasy novel in the New Management series, a spin-off from the Laundry Files series. The new Prime Minister is an ancient eldritch god, and people keep developing strange powers.

Fantasy novel inspired by the legend of the Chinese moon goddess, Chang’e.

Young-adult gender-bent fantasy adventure novel. A young treasure hunter pricks her finger on a bone spindle and accidentally awakens the spirit of Briar Rose, a prince under a sleeping spell.

SF novel. A video-game developer struggles to get a new VR game working, but the first trial run knocks him unconscious — and when he wakes his daughters no longer exist.

The Kickstarter effort doesn’t close until May, and we’ve not quite doubled our initial fund raising goal. But archivist Kate is already hard at work: Hello from the Locus offices! I’m thrilled to report that our scanner and some preliminary archival materials have arrived so I’ve finally been able to dig in to the archives. Though I’m still early in the A’s, I’ve already come across a gem I wanted