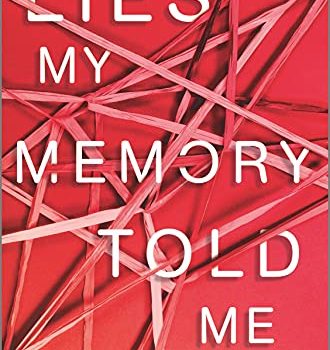 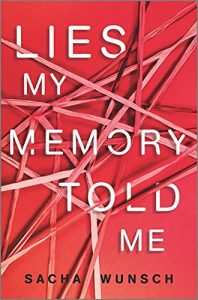 Sacha Wunsch’s just slightly futuristic debut Lies My Memory Told Me offers up an excellent technological twist with the invention of “Enhanced Memory.” People no longer have to spend the money to travel, take the time to learn a new skill, or risk their lives on activities like racing cars. They can just put on a special set of headphones and insert a disc that holds a purchased memory into a handheld device. In an instant they are off and running on a new adventure and never have to leave their couch. Enhanced Memory transforms the way people live in an instant and everybody loves it. Everybody. (If you have spent any time reading science fiction, then you know there is going to be a serious downside to this tech.)

Nova’s parents are Enhanced Memory’s inventors, but while she gets to try out pretty much any memory she wants, and lots of folks think it must be cool to be the daughter of such brilliant scientists, her life is little different from the average teen. She is a bit bothered by the fact that her folks are obsessed with their creation and are spending a lot less time with her than they used to, but that can be forgiven. They have changed the world, and are very busy because of that. Does it really matter that they forget to attend their daughter’s performance in the high school play? (Spoiler alert: it matters.)

Everything changes for Nova when she meets Kade, who initially mistakes her for a missing friend of his, Harlow. Kade has strong opinions about Enhanced Memory, though. He thinks it’s dangerously addictive and has been striking a blow for the superiority of “real experiences” by uploading videos of himself creating his own memories. (The fact that Kade has gained internet fame for vides of himself doing unremarkable things like ice skating shows just how much society has been transformed.) As Nova and Kade fall for each other, she begins to question Enhanced Memory’s potential downfalls. She also starts to wonder what happened to Harlow who, as it turns out, looks A LOT like Nova.

Author Sacha Wunsch does a solid job of showing Enhanced Memory’s positives and negatives and building tension between Nova and her parents as she starts to view the technology more critically. There are a lot of unanswered questions here that raise issues with the plot, though. First, while Harlow is actually missing, no one seems to be looking for her. (There’s a lot of chatter on the internet, but she has no family or close friends who have organized a search, which makes no sense.) Kade’s family is also glaringly absent, something that becomes particularly odd when he also disappears. Nova’s job at a local nursing home, which apparently caters to many residents with Alzheimer’s, also raises way more questions than it answers. While its inclusion in the narrative soon becomes obvious, the fact that a lot of elderly people with memory problems would be involved in dangerous medical procedures with no family involved is… impossible to believe. Too many things are just a bit too convenient, and this interrupts the reading experience.

In the end, Nova figures everything out, saves Kade, finds a lot of other people in peril, and the book ends. After a plot that has steadily increased in tension for over a hundred pages, there is only a two-page epilogue to wrap it all up. With so many questions remaining about the legal, ethical, and criminal ramifications of Enhanced Memory, those pages are not nearly enough. The technology is really cool, but the story exploring it needed to stay strong as it crossed the finish line. 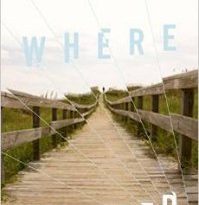