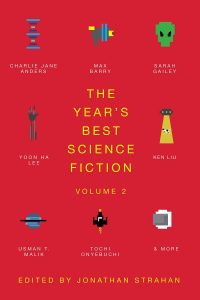 In his introduction to his second Year’s Best Sci­ence Fiction for Saga Press, Jonathan Strahan observes, surprising no one, that 2020 was an extremely strange year, and not only for science fiction. But readers expecting this strangeness to show up in Strahan’s customarily eclectic selec­tion (27 stories from 18 different sources) are getting ahead of themselves: many, if not most, of the stories published in 2020 were likely written and accepted well before everything went south, and I’m not sure any readers other than literary masochists are eagerly anticipating the gloomy parables of isolation that are surely in the pipeline. If anything, Strahan’s selection this year seems an enjoyable distraction, and it’s almost a relief to be reminded, as SF does so well, that things can indeed get much weirder.

This doesn’t mean that the stories aren’t timely or relevant, or even urgent in a couple of cases. We’re clearly in an era of ascendent right-wing extremism, and this can lead to Max Barry’s hilarious “It Came from Cruden Farm”, in which the US has indeed hidden an alien away all these years, a kind of giant blue sack – but one which has been turned into a rabid white supremacist by exposure to Fox News and the Internet. Or it can result in the far more unsettling “Don’t Mind Me”, in which Suzanne Palmer imag­ines an invasive technology called “minders,” devices literally clamped to students’ heads, which can pre-emptively censor any content that parents might object to – even up to blocking out whole genders or ethnic groups; while the story predates the current debate over critical race theory, it couldn’t be more timely.

In fact, an underlying sense of freedom at peril may be one reason that several of the stories touch upon radicalization of one sort or another. Mal, the narrator of Ozzie M. Gartrell’s “The Transition of OSOOSI”, lives in a US rigidly divided into True Americans and Citizen Americans, the latter of whom have fewer legal protections than animals. When a friend develops an Augmented Reality device which could subvert the dominant culture’s technology, Mal chooses to risk joining a resistance collective, decid­ing “It’s time to set flame to the world”. Lawyers in Karl Schroeder’s “The Suicide of Our Troubles” take on clients that are personifications not only of natural resources – lakes, rivers, etc. – but of pol­lutants as well, such as the mercury poisoning in a municipal water supply suing for its own demise. Controversial legal maneuvering is also at the center of Tochi Onyebuchi’s “How to Pay Reparations: A Documentary”, in which a white mayor ends up taking credit for a reparations bill, but which largely addresses the complexity of trying to find a useful algorithm for the payments. Charlie Jane Anders’s “If You Take My Meaning”, mentioned above, involved a character making a radical and courageous choice in order to help understand the mysterious aliens on the planet. Even drones can be radicalized, as in Sarah Gailey’s “Drones to Ploughshares”, in which a law-enforcement drone in an agricultural area finds itself invited to join an unusual resistance community.

The Year’s Best is by no means overbalanced with political and social high seriousness, however, and in many ways it feels more sprightly than Strahan’s first volume did last year. In terms of familiar SF themes, drones, avatars, and robots show up far more often than space travel, but some of them are deliberate evocations of older traditions, such as the robot in “Father”, Ray Nayler’s Bradbury-flavored version of an alternate 1950s. A few feature versions of the “little tailor” plot which Heinlein claimed as one of the three key plots of SF: in Alastair Reynolds’s delightful “Polished Performance”, a lowly floor-scrubbing bot helps solve a crisis when the robots on a generation ship learn that all the humans have died, while an enhanced travel pillow, of all things, helps save a critically damaged airliner in Timons Esaias’s “GO. NOW. FIX’. Both Vina Jie-Min Prasad’s “A Guide for Working Breeds”, an ingratiating tale of ro­bot mentorship which is the lead story in the volume, and Ken Liu’s “50 Things Every AI Working with Humans Should Know”, offer witty and thoughtful insights on the nature of human/AI interactions. So does Pat Cadigan’s “The Final Performance of the Amazing Ralphie”, one of a couple of selections from Ann VanderMeer’s Avatars Inc., in which the avatar in question has its own personality and its own ways of dealing with the hospice patients to which it’s been assigned. In terms of clever character relationships and voice, it’s one of the most distinctive stories here, one of the few set in space, and one of a couple that touch upon the topic of caretaking the elderly. The other is Usman T. Malik’s touching “Beyond These Stars Other Tribulations of Love”, whose protagonist, traveling in interstellar space, finds a way to deal with his mother’s dementia by splitting his consciousness between an AI tending to her and his own body.

As in Malik’s story, the manipulation of conscious­ness seems to be another emerging preoccupation among writers (or at least among Strahan’s predi­lections; it’s important to remember how an editor shapes any anthology). The narrator of Sameem Siddiqi’s “Airbody” essentially rents his own body out as a kind of AirBNB, sharing his consciousness with paid clients. In Nadia Afifi’s “The Bahrain Underground Bazaar”, a device called a NeuroLync records the experiences of its users and repackages them, creating a rather gruesome market in death experiences. Similarly, Marian Denise Moore’s “A Mastery of German” imagines a means of transfer­ring memories and skills from one brain to that of another member of the same haplogroup. In Maureen McHugh’s beautifully written “Yellow and the Per­ception of Reality”, research involving octopi goes badly wrong, leaving two researchers dead and the narrator’s sister with brain damage that blurs her perception of boundaries; only the color yellow seems to enable her to recognize her own sister.

There are, as usual, stories that don’t seem to fit any patterns. Yoon Ha Lee’s brilliant military space operas hardly prepare us for “The Mermaid As­tronaut”, a thoroughly charming take on the Little Mermaid, though with a bit of a tragic edge. Meg Elison’s “The Pill” demands a serious consideration of body images and body shaming by presenting us with a society transformed by a pill which (rather unpleasantly) causes fat to be excreted, leading to blatant discrimination against those failing to con­form, and to an unusual underground movement. A.T. Greenblatt’s “Burn or the Episodic Life of Sam Wells as a Super” is a wry and satiric version of a Little Tailor story; the title character’s superpower seems to be simply setting his head and hands on fire, a skill not particularly useful to the cadre of superheroes who protect the city. Gene Doucette’s “Schrodinger’s Catastrophe” is an hilarious quantum tall-tale which begins aboard a spaceship with a classic SF hook – a broken mug spontaneously reassembles itself. The story turns into a twisty parody of indeterminacy, as an investigating officer finds a pocket of space in which causality has been suspended; every step of the plot becomes another Schrodinger’s cat-like puzzle. Probably the most thoroughly original story here is Rebecca Campbell’s “An Important Failure”, which somehow manages to combine ongoing climate disaster with the specific techniques and history of building a fine violin; we first meet the violin maker Mason as he poaches a rare old-growth spruce for wood, determined to craft an exquisite instrument for a talented young violinist. The result is a deeply affecting meditation on loss, creation, and hope – not to mention morally ambiguous vandalism.

Perhaps it’s just because we need it more, but this second iteration of Strahan’s Saga Press Year’s Best seems livelier than his first collection. As important as the variety of themes and styles, of course, is the diversity of the contributors; long-familiar names like Pat Cadigan, Ken Liu, Alastair Reynolds, Maureen McHugh, and Yoon Ha Lee are joined by new (at least to me) discoveries like Ozzie M. Gartrell and rapidly rising figures like Neon Yang and Tochi Onyebuchi. In the seven decades or so since the first year’s best SF anthologies began to appear (the first was Bleiler & Dikty’s in 1949), their function has gradually shifted from books that were largely presentation pieces promoting SF as a commercially viable sales category, to implicitly arguing for literary respect (as with Merril and Carr), to celebrating a large if messy community of devoted fans (as with Dozois and Hartwell). Only in the past few years, however, has the field’s growing multiplicity of voices and cultural traditions become a substantial part of that celebration, and Strahan’s anthologies (OK, he’s an old pal and a podcastmate) deserve a reasonable share of credit for that. 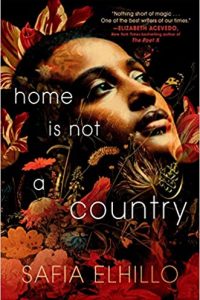