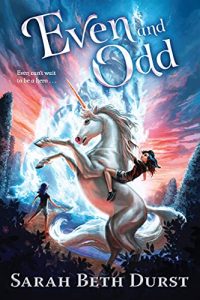 Kids save their worlds from failing magic in this amusing middle-grade fantasy novel, and while the plot might be a little simplistic for older readers, the story’s full of quirky characters and unexpected encounters that make up for it. The sisters ‘‘Even’’ (Emma) and ‘‘Odd’’ (Olivia) share their magic, getting their nicknames because Even has the power one day, and Odd the next. Even loves the magic, but Odd would rather do without having to worry about her magic acting up in front of mundanes. They live near a gateway to the magical land of Firoth, and their parents run a shop that serves the overtly magical beings that come to the mundane world. Even loves helping their varied customers, and dreams of being an Academy wiz­ard and going on heroic quests; Odd just wants to help out at the animal shelter. Then something goes wrong with the magic, and Even and Odd, with the assistance of a panicky young unicorn, Jeremy, go to the gateway to see what’s happening and get stuck in the magic world, where something is very wrong. The girls are determined to set things right, even if they don’t know how things work in this world, much less what’s wrong. Their quest ends up being a fun mix of magical creatures that are rarely what the girls expect, wondrous sights, and a female bad guy, a sort of magical mad scientist who’s too caught up in her grand plan to see the damage she’s causing. It’s definitely over-the-top, with a somewhat predictable but satisfying final confrontation, great entertainment for kids – and adults with a tolerance for goofiness. 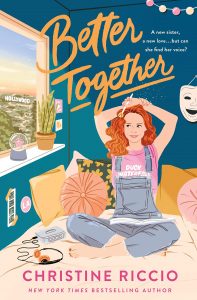 Two sisters, separated when only four and six, meet unexpectedly at a Rediscover Yourself Re­treat in this diverting young-adult novel, a sort of update of The Parent Trap with a little fantasy twist involving body swapping. Siri, a New York ballet dancer recovering from a career-changing accident, was only four when her father left, and thanks to her career-driven mother, doesn’t really remember what happened back then. Jamie is a wan­nabe stand-up comedian with stage fright, living in the Los Angeles area with her producer father; she was six when the split happened. The sisters’ re­union doesn’t go well at first, with Siri traumatized when she realizes just how much her mother lied to her, and Jamie angry and plotting not a reunion but revenge against their parents. Then the body swap happens, and the girls get a chance to live each others’ lives – if they can keep from screwing up. Both girls end up finding romance, meet-cute style and a little too perfect, but sweet to watch. They both also come to some hard realizations about how they deal with relationships in general. Things get painful at times as the sisters face not just how shitty their parents can be, but also their own self-centered and wrong-headed behavior. For the most part, though, this is just plain fast-paced fun as the two girls stumble through being who they’re not, finally discovering who they want to be in the process.

Carolyn F. Cushman, Senior Editor, has worked for Locus since 1985, the longest of any of the current staff, and handles our in-house books database, writes our New and Notable section, and does the monthly Books Received columns. She is a graduate of Western Washington University with a degree in English. She published a fantasy novel, Witch and Wombat, in 1994.