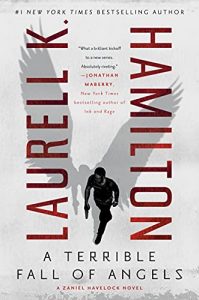 A world where angels, demons, and other su­pernatural beings interact with humans provides a fascinating backdrop for this novel, the first in a new urban fantasy series. Detective Zaniel ‘‘Havoc’’ Havelock was taken as a child to train to be an Angel Speaker, one of the special few who can communicate directly with angels, but near the end of his training something went wrong and he chose to leave for the mortal world. Now he works as a cop in the Metaphysical Coordination Unit, dealing with crimes involving angels or demons, trying to help humans while making sure the precarious peace between Heaven and Hell isn’t destroyed. The novel is as much about Havelock’s struggle to deal with his day-to-day life as it is a sort of procedural mystery, where procedures in­clude various forms of magic. The novel’s central case involves a vicious rape and murder, with the crime scene strewn with angel feathers, and appar­ent demonic involvement of an unheard-of type. The investigation introduces Havelock’s rather quirky teammates who have some varied talents, but also drags him back into painful contact with old associates from the College of Angels, even as he works to end his separation from his wife and son. Angst mixes with action, but it’s the gradual revelations about Havelock’s life and the way angels interact with humans that make this truly fascinating. Not all is revealed by the end, leaving plenty of room for future volumes. Though this lacks the intense erotic involvement that has come to be a major part of Hamilton’s Anita Blake and Merry Gentry novels, some very human passions seem to be heating up, suggesting interesting, if potentially spiritually complicated, developments to come on that front as well. 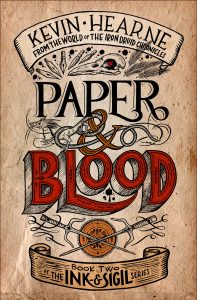 The second book in the Ink & Sigil series, a spin-off from the Iron Druid series, sends cursed sigil agent Al MacBharrais off to Australia, a far cry from his territory in Glasgow, Scotland. Al’s counterpart in Victoria has disappeared, and her apprentice needs help, so Al heads out with the highly irreverent hobgoblin Buck Foy to see what’s up. What they find is a major mess with some big hitters making trouble, but fortunately unexpected allies turn up, including the Iron Druid and his dogs, alerted to trouble by a local elemental. Plenty of magical action mixes amus­ingly with Buck Foy’s obscene observations, along with occasional stops for storytelling. It’s silly, thrilling, funny, and occasionally gory, with just enough new clues as to who cursed Al to pique interest in what’s still to come in the series.