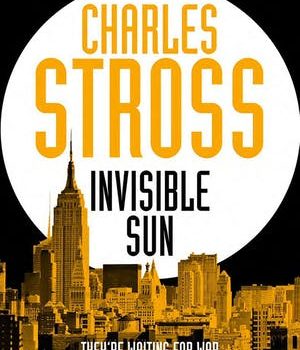 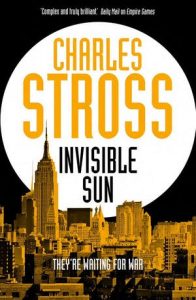 Partway into Charles Stross’s Invisible Sun, a harried intelligence/security chief says, ‘‘We’ve got a lot of balls in the air,’’ a condition that might apply as well to a number of his fellow characters and to Stross himself in his authorial role. This ninth and final entry in what is now called The Merchant Princes series has morphed into something far more complex than its original parallel-worlds/cross-time intrigue-adventure template. In the final three volumes, bearing the sub-series title Empire Games, the genre category has evolved from the faux-medieval-fantasy Stross called ‘‘[Nine Princes in] Amber with economics’’ into a ‘‘paratime technothriller,’’ complete with tradecraft details, mission profiles, weapon-systems nomenclature, and alphabet-soup agencies on all sides of a multisided game of spies, moles, sleeper cells, imposters, double agents, feints, coups, head-games, disinformation campaigns, and general shadowboxing in the dark. As a result, the story is equal parts exciting and unsettling, and its characters are a mix of the sympathetic and the repellant. Oh, and there’s a thoroughly science-fictional cross-time invasion by genocidal aliens wielding planet-busting superweapons. Also some bitterly funny observations on matters political and bureaucratical. In short, the usual Strossian recipe.

The original iteration of the series (we’ll come back to that) began with The Family Trade (2004), when journalist Miriam Beckstein discovered that she was a world-walker and the lost daughter of an aristocratic Clan – a kind of lost princess. (Okay, a countess.) Now it ends with Miriam’s lost (okay, given-up-for-adoption) daughter Rita Douglas working for US Homeland Security, pretending to be a princess in an alternate timeline, while the real alt-timeline Princess Elizabeth Hanover, heir presumptive of the New British Empire in exile, pinballs around an unfamiliar world, pursued by two sets of intelligence operatives. Then there’s the matter of a succession crisis and a coup on one timeline, and on another the incursion of those genocidal aliens.

It’s much easier to discuss thematics than the sprawling, multi-threaded plot. Alternate-worlds stories are generally at least tangentially ‘‘about’’ history – speculating on and elaborating the crucial events that lead to changes in the different worlds – but most of such divergences have already been accounted for and exploited in the earlier books. Nor is it just about the adventure possibilities of dodging around these worlds, though there is certainly plenty of running and hiding and escaping and shooting and such. Instead, most of Invisible Sun, is, like its immediate predecessors, Empire Games and Dark State, about the ruthless, relentless struggles among power bases – the machineries of empire (or Commonwealth or US security apparatus) that grind up individuals – and about the forces that drive and disrupt the dangerous balances of such polities. Miriam, now the top intelligence minister in her second adopted homeland, understands that the US of her original timeline is:

… a planetary hegemonic power with a very aggressive foreign policy, a tendency to project their own worst intentions onto others, and a system that makes it really difficult to back down from a fight. Any leader who shows weakness hemorrhages support with the electorate, and the foreign affairs hierarchy is structured to systematically filter out doves and promote hawks.

The speech might be Miriam’s, but the perception, one suspects, is authorial. Similarly, one of the book’s wiser heads, a geriatric sleeper agent from a fossilized, abandoned East German espionage project, explains:

Politics is personal…. Republics… like to believe it has nothing to do with heredity, or accident of birth, or who went to school with who…. Everything is supposed to be orderly, like planets orbiting the sun. But the conflict of ideals and personal loyalties warps the entire structure, like an invisible sun passing through a solar system, its gravity dragging orbits out of alignment and causing havoc.

Indeed, much of the conflict and resolution depends on the way family dynamics interact with paratime geopolitics, with social trauma and institutional memory (or its failure). Rita is dispatched as an intelligence operative with a diplomatic mission because of who her mother is. Princess Elizabeth is on the run from an unwanted dynastic marriage to a dissolute and diseased French prince. Characters are held hostage or prisoner and rescued because of their personal-familial as well as political status. Some of the least appealing characters are those whose emotional ties are not to people or kin but to ideologies or stereotypes or abstract entities such as national security or the Revolution. The portraits of inflexible hard-liners and true believers are particularly sharp and unforgiving – in contrast to the grudging respect given to those who are hard-nosed but pragmatic and not bloodthirsty. (For example, the US President is an iconic tough cookie with the smarts to know when to back off.)

Other amusements and alarms include the undiminished spycraft competence of grandfatherly Kurt Douglas, leader of a never-decommissioned sleeper organization; the bemused, fish-out-of water adventures of the Princess Elizabeth in an orderly and thoroughly democratic 21st-century  Berlin; the hypertrophied, merciless panopticon surveillance apparatus of the not-quite-our-US of Timeline Two; the deceptively comic-operatic steampunk-with-nukes environment of the New American Commonwealth in Timeline Three; and the detailed treatment of what an operational Project Orion spacecraft might be like. (Pro tip: Put the launch pad in an unoccupied timeline and be very careful of maneuvering burns.)

This volume does indeed wrap up the story lines and character trajectories, as well as finally supplying a big-picture science-fictional rationale for the whole paratime/world-walkers setup. Getting there has involved a lot of story-telling, crossing four major timelines, and encompassing industrial, political, social, and economic revolutions and cataclysmic readjustments and realignments for all participants. Stross again helpfully offers orientation material right up front – descriptions of the crucial timelines and lists of characters – and a glossary of terms and acronyms at the back. In an ‘‘Afterword and Apologia’’, he recounts the genesis and repackaging of the series (the first six books became three) and the revisions and delays that occupied nearly two decades of his life. The payoff for this long, twisty, frightening, exhilarating ride is altogether satisfactory, and Stross has graciously (and cannily) left open the option for later uses of the playground. For now, the Merchant Princes have landed. (But keep watching the paratemporal skies.)