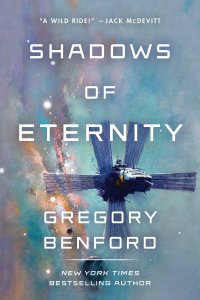 It’s hard to label any book the “capstone” to a career when the author in question is still lively, vibrant, intellectually bold, ambitious, au courant, and masterfully proficient. Who knows what new heights such a person might reach beyond the current title? And yet one is tempted to attach this label to Greg Benford’s newest, Shadows of Eternity, if only because the author is no longer a spring chicken, having attained the venerable age of eighty, with a career stretching back to 1965 (that’s fifty-six professionally productive years out of the eighty, by the way). This book encapsulates, extends, elaborates, and exemplifies all the marvelous work full of cosmic visions, scientific accuracy, and humanist compassion and understanding that Benford has given us to date. And if, Lord forbid, he never produces another book, this one would indeed make a fitting capper. But in line with his prediction in this book for human lifespans that will reach three centuries-plus, I suspect Benford plans to be around for a while yet. Long may his books flow!

This majestic, complex, intricate novel works in a classic mode of SF which is not much in favor today: hardcore extrapolation and outward-focused strivings. After you run through a small list of The Usual Suspects—Adrian Tchaikovsky, Peter Hamilton, Alastair Reynolds, Neal Asher, Paul McAuley, Stephen Baxter—the candidates get thin on the ground. And yet this mode was once the core and beating heart of the genre. It’s good to see the old organ still pumping.

The novel is set a handful of centuries from the present. For the first half, our venue is the Moon. Then, with the introduction of a certain whammy, our attention shifts to Earth, Mars, and, finally, the photosphere of the Sun, before finally returning to good old Luna. However, throughout this Solar System action, the real concerns are galactic.

Our protagonist is one Rachel Cohen, from Earth. All her years to date (she’s in her forties, but given the extended lifespans of her era, that’s just novice age), she desired and trained for only one job: to work at the SETI Library on Luna. She makes the admissions cut, impressing a crusty old Prefect named Stiles, and begins her work.

Immediately we get pleasing wisps of Asimov’s Foundation series, as we witness dedicated acolytes dealing with dangerous knowledge and treasures which the population-at-large must not be privy to.

Over the centuries, real messages from alien civilizations have finally begun to reach Earth, in a kind of Vingean conversation. The senders represent every grade of development, from folks who might be our peers to others who are way beyond us. Some of the messages are plaintext, others coded. But the third kind are the real gems: these alien signals are blueprints for actual minds, which come alive when run as programs. (Rudy Rucker has played with this same notion.) Interfacing with these minds involves full-sensory virtual experiences.

And so Rachel—having acquired lodgings and a wild-girl roommate named Catkejen, while habituating herself to Lunar culture and society—begins mind-to-mind interfacing to elicit knowledge both practical and theoretical for humanity’s benefit.

The first two major interludes in her career read almost like self-contained stories, but are organically integrated into what comes later. In the first incident, Rachel winkles out the method that will save the whole solar system from an incoming wave of deadly radiation, while in the second she merely composes a revolutionary symphony based on alien concepts. Her third outing discovers that the wormhole transit system—to which mankind currently has no access—might very well harbor a deadly enemy.

But Rachel’s time in her sensory pod comes to an end with the surprising and unannounced arrival of actual in-the-flesh aliens, a small ship with a few winged beings dubbed Ythrians. Here the knowledgeable reader might pause in recognition and recall that these sapients were the creation of Poul Anderson, seen mainly in The People of the Wind. Benford explains in an Afterword that he and Anderson frequently discussed the Ythrians, and their appearance here is Benford’s homage to his deceased pal.

In any case, the Ythri specifically ask for Rachel to be humanity’s ambassador, and now begins some thrilling meatspace adventures whose details I will not spoil. During these bouts, Rachel comes to bond more and more closely with the boss Ythri named Fraq, until by the novel’s triumphant close they form an unquenchable alien-human dyad with their eyes on the stars.

Benford’s achievements here are multiplex. His character-building rivals his world-building. Rachel, Fraq, and the rest of the cast jump off the page in a lively and entertaining manner. Rachel’s progress from raw newbie to masterful wizard is entirely believable, and replete with stumbles. Fraq’s non-humanness (he gets some first-person chapters) does honor to Poul Anderson’s original concepts.

Benford does not minimize the trials which humanity had to survive to reach the present era, but neither does he present them as overly consequential. He gives a sense of the indomitable spirit of our species, and our good track record so far for survival. On the other hand, the plentiful evidence of planetary extinctions across the galaxy lends a somber tone to mankind’s future.

The Lunar setting displays the deepest world-building, and here Benford is in dialogue with Heinlein, Varley and others, writers whom a book-loving Rachel actually namechecks. Much like John Kessel’s very different but equally hefty The Moon and the Other, this book portrays real alternatives to our currents systems of living.

Benford’s usual poetry of science is manifest on nearly every page. This is a man for whom all of creation is inherent with a supernal beauty.

Rain turning to snowflakes at high noon on the equator. Rain like drops of blood in the rocky highlands. Mists glowing like white fire in the valleys. Chasms radiating in mountain ranges like fractures in frosted windowpanes. Winding rivers in the fevered tropics, shapely as women’s torsos or slim violins. Icecaps featuring swollen growths like blue berets. Storms that solidified like hurled hammerheads across tropical isles. Clouds drifting like pregnant purple cows. Wind-blasted rockwork in curious curved forms, like frozen music. Lurching beasts all angles and ribs, grazing across mustard grasslands.

The sailcraft played out its fat helium balloons, which went roving roving roving until they ran out of lift. These captured close-up the many odd beasts, eyed landscapes for buildings, assayed the sweep of land for betraying rectangles—signs of intelligence, or else of obsessive animals who knew Euclid in their souls.

Ultimately, Rachel Cohen comes to shine as a very idiosyncratic and particularized Everywoman, the current avatar of the questing spirit and intelligence that motivated some Neanderthal to fashion a tool or gaze up at the stars in wonder. Benford’s gift to us is to demonstrate, in adventurous telling, that this primal urge is the reason we all read and write SF. 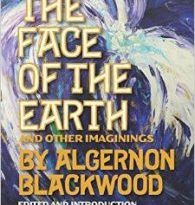 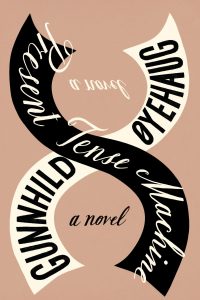