Collection of 19 stories, all previously published.

Anders has wisely avoided the temptation to assemble a “greatest hits” album in favor of showing us the shape of her career as she views it. It’s a very interesting shape, more complex than might be expected by readers familiar only with her novels.

Bishop, Michael: A Few Last Words for the Late Immortals

Collection of 34 short stories, 15 poems, and a play about writing SF, spanning Bishop’s career from his college days to a new poem and new story. Bishop’s afterword discusses the origins of each. Introduction by Sarah Pinsker. Edited by Michael H. Hutchins. All the stories have been edited/revised to some degree.

Conclusion to both the original Ender series and the Ender’s Shadow series. The children of Ender and Bean solve the great problem of the Ender Universe—the deadly virus they call the descolada, which is incurable and will kill all of humanity if it is allowed to escape from Lusitania.

SF romance novel, 15th in the series. Lucy Bell, one of the settlers in Illusion Town on the colony world of Harmony, gets lost after attending a wedding and finds herself lost in an alien underground maze.

Gaslamp political fantasy novel, the first in the Grand Illusion series. Isolate Steffan Dekkard is an isolate, a rare person immune to the projections of empaths, and his job as security for politicians lands him in the middle of a deadly power struggle.

Non-fiction, a look at the emergence of SF, including its New Wave movement, as expressions of cultural and political movements in America and Great Britain from the 1950s to the mid-1980s, with particular attention on authors including John Brunner, Octavia Butler, Philip K. Dick, Ursula K. Le Guin, Joanna Russ, and John Wyndham.

The editors’ purview is generously scoped, and the detailed treatment of UK phenomena and trends is refreshing. The editors note that “the influence of psychedelia, surrealism, and experimentation in general on book cover art during the period can arguably be seen most strongly in the science fiction field,” and they have included hundreds of illustrative covers that eloquently make that point. Turning to any random page proves a delicious exercise of artistic degustation, making the book double as coffee-table divertissement.

Fantasy/magical realism novel about a woman who gives birth to a baby owl she raises despite her husband’s obsessive determination to “cure” their daughter.

SF space opera novel about a former Admiral and crew turn to running a restaurant on a space station, only to have an old enemy turn up.

You Sexy Thing, Cat Rambo’s first space opera novel, is in fact a romp. If you’re the kind of person who likes Mass Effect, or enjoyed Valerie Valdes’s Chilling Effect and Prime Deceptions, or fell head-over-heels for Tim Pratt’s Axiom trilogy (The Wrong Stars and sequels), then this book is definitely for you. This is a fast, zippy novel that hides some surprisingly substantial emotional heavy lifting under its hood.

Apart from the breakneck plot, what really stands out is how many nods to other bits of SF/F works Rambo squeezes in. There’s a lot of Farscape in here, as is the mysticism of Star Wars and the humor of Hitchhiker’s Guide. Some of the names will cause an eyebrow raise – my fave was a planet called “Emshwills” – and three-quarters of the book feels familiar, not in a carbon copy-way but in a remixed and remastered way. Has Rambo created something right on the cutting edge of the genre? Nope. But what they have created is a cozy-with-a-soupçon-of-suspense hoot-and-a-half.

Near-future SF thriller novel about climate change and one man who has a Big Idea about how to reverse it, but possibly the fix is worse than the problem.

Locals on a distant planet seek the aid of the Elder sorcerer to help with the demon terrorizing them, but the “sorcerer” is actually an anthropologist, and he’s forbidden to interfere.

SF time-travel novel, the third in the CHRONOS Origins series, a spin-off from the CHRONOS Files series. CHRONOS historians pursue a sociopath and the mess he’s made of history.

Young-adult fantasy novel. After a Rowenna rescues a handsome stranger from a shipwreck, her recently-deceased mother miraculously returns to life. But her mother is now a monster, who turns Rowenna’s brothers into swans and steals Rowenna’s voice to hide her secret.

SF novel, the first in the Coronam series, set on a colony world reverted to 16th-century European culture — with aliens.

Star Wars tie-in novel, the third and final book in the Ascendancy trilogy. 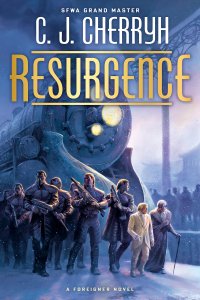 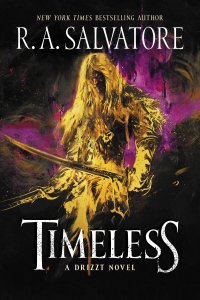 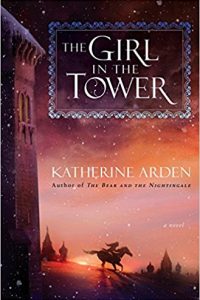 Neil Richard Gaiman was born November 10, 1960 in Porchester, England. He attended school in southern England before moving to London, where he worked as a freelance journalist in the early ’80s. His first stories sold to gaming and men’s magazines in 1984 and ’85, and his first work in the SF field was Ghastly Beyond Belief, a book of humorous SF quotations (1985, with Kim Newman). His career in